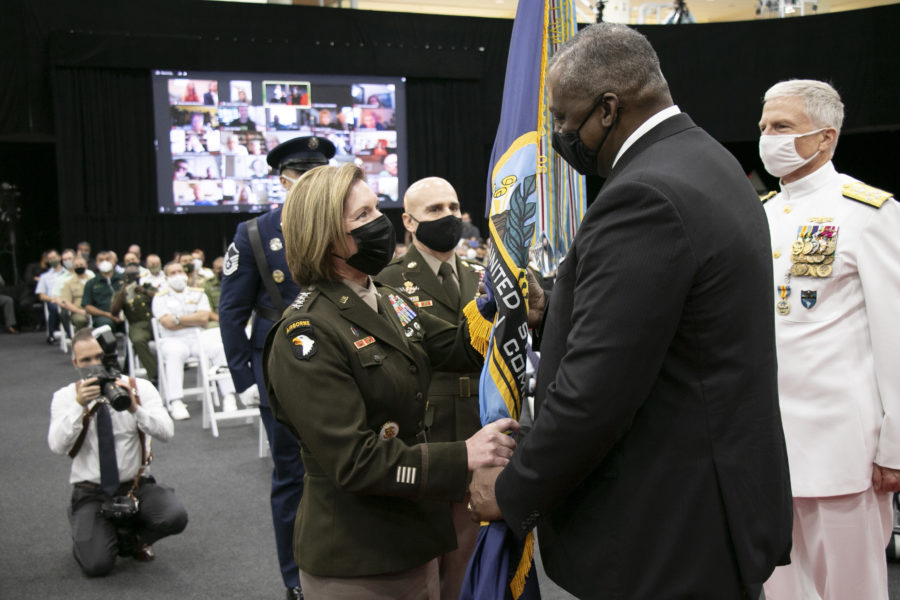 Richardson Takes Over SOUTHCOM, Only the 3rd Woman to Lead a Combatant Command

A Black Hawk pilot who commanded her assault helicopter battalion in Operation Iraqi Freedom took over U.S. Southern Command in a ceremony Oct. 29.

Army Gen. Laura J. Richardson, who received her fourth star Oct. 18, became the third woman to lead one of the U.S. military’s 11 unified combatant commands and the first to lead SOUTHCOM. She assumed command from Navy Adm. Craig S. Faller, who is retiring.

Secretary of Defense Lloyd J. Austin III, a retired Army general who led U.S. Central Command, presided over the command change that took place in the gymnasium of Southern Command headquarters in Doral, Fla., near Miami.

In his remarks, Austin recalled first meeting Richardson when she was assigned as a Senate liaison escorting congressional delegations into Iraq.

“I’ve been impressed with her ever since,” Austin said. “Most recently, she led U.S. Army North doing everything from fighting wildfires to helping Americans get vaccinated. It was an extraordinary time, and she did an extraordinary job. … As the President says, she is pushing open the doors of opportunity for all women in our military.”

As an ROTC cadet, Richardson graduated from Metropolitan State University of Denver, later earning degrees from the Army Command and Staff College and National Defense University. She has commanded “from the company to the Theater Army level,” according to a command statement. Her spouse, whom she met at flight school at Fort Rucker, Ala., according to Austin, is Lt. Gen. James M. Richardson, deputy commanding general of Army Futures Command.

After accepting command, Laura Richardson acknowledged recent challenges and said the command “will focus on rebuilding regional resilience; expanding our security, cooperation, and multilateral exercises; and increasing training and education.

“We will synchronize our efforts across all combatant commands to narrow the seams our competitors are trying to exploit. We will draw upon the strength in our neighborhood from partners who share our values of freedom, democracy, respect for human rights, the rule of law, and gender equality.”

A recent example: an earthquake in August.

“The men and women of this command were ready for a quiet Saturday after a busy work week,” Austin said, evoking that day. “But at 8:30 in the morning, a 7.2-magnitude earthquake hit Haiti, and churches and schools and homes collapsed. Boulders blocked the roads. One of America’s neighbors needed help, and so you raced to respond—all of you, from Adm. Faller on down.

“You sent aircraft to survey the damage and helicopters from Joint Task Force Bravo in Puerto Rico’s National Guard; delivered food and aid; and working together with [the U.S Agency for International Development], you saved hundreds of lives. It was a massive effort, but, you know, that’s what SOUTHCOM does time and again.”

Chairman of the Joint Chiefs of Staff Army Gen. Mark A. Milley put the command’s significance into perspective, describing its international partnerships as critical to securing half the globe.

“Southern Command has built an incredible reputation for regional expertise for interagency cooperation and partnership,” Milley said, and it has “really put meat on the bones of a concept that SecDef Austin has introduced to us called integrated deterrence. And it means a great deal, not only in Asia, in Europe, in Africa, in the Middle East—but it means a great deal right here, … to counter the malign influences of adversary nations that dare to come into the Western Hemisphere.”

Milley estimated that 23 of the 47 allies and partners throughout the region were represented at the ceremony, “and we’re all shoulder to shoulder in that common cause to protect our hemisphere from any international threats. … Deterrence against our potential adversaries such as China, or Russia, or Iran, or terrorists, or drug cartels, or human traffickers, or any other threat will be met with a unified level of resistance by every single country in this hemisphere.”

In his farewell speech, Faller said he “wasn’t sure” if he’d be “smiling or crying” and settled on, “thank you—the two best words in the English language,” he said.

“Martha and I are filled with gratitude,” Faller said, referring to his wife. “That’s the way I would describe how I feel, how we feel, about today. We’re grateful for the opportunity to have served this great nation and in this wonderful command.”