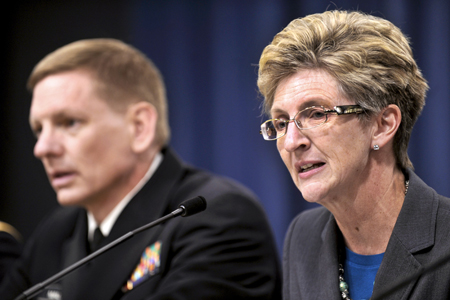 Defense Department review found that personnel at the Air Force-run military mortuary at Dover AFB, Del., treated the remains of victims of the 9/11 attack at the Pentagon with “care, dignity, and respect,” said Jo Ann Rooney, DOD’s acting personnel and readiness undersecretary. The treatment of the victims’ remains was in accordance with “appropriate processes and procedures,” Rooney told reporters on March 30. She briefed reporters that day on the release of supporting documents (Appendix E) from the independent panel report that reviewed the mortuary’s operations. The report, released last month, disclosed that some 9/11 victims’ cremated remains ended up in a landfill in Virginia, causing public backlash. Rooney explained that those remains dealt exclusively with “fragmented material” that forensic experts could not identify. “Those were specimens that we knew were biological in nature, but we could not determine, first, if they were human, or second of all, whether there were any terrorist remains mixed in,” she explained. “The practice in a situation like that . . . would be to treat that as medical waste and dispose accordingly,” she added. (Dover briefing transcript) (Click here for hyperlinks to view Appendix E.)