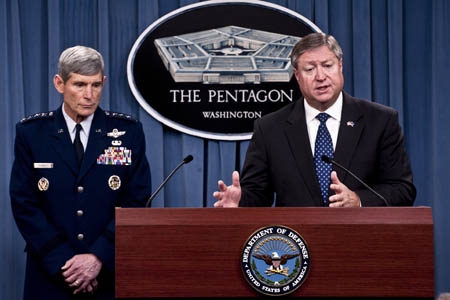 Air Force may not have handled 9/11 victims’ remains with all the “reverence” it should have, but it followed the disposition instructions of the then Pentagon leadership, said Chief of Staff Gen. Norton Schwartz Wednesday. Speaking to defense reporters in Washington, D.C., Schwartz said service officials “uncovered correspondence” from the March 2002 timeframe from the Pentagon’s personnel office that spelled out how to categorize and dispose of such remains. “To the best of our knowledge at this moment in time, we followed those disposition instructions,” said Schwartz. He spoke the day after a Pentagon-appointed independent panel reviewing Air Force military mortuary operations at Dover AFB, Del., disclosed that some 9/11 victims’ cremated remains ended up in a landfill in Virginia. Schwartz said while there have been “allusions” that Dover mishandled victims’ remains from the World Trade Center in New York and the airplane crash site in Shanksville, Pa., there’s nothing to indicate that the mortuary was involved with those locations. “Based on what we know now . . . Dover dealt with the Pentagon fallen, but not others,” said Schwartz. The Air Force has pushed hard since 2008, when questionable practices at Dover were uncovered, to ensure “we treat the fallen with the dignity and respect and reverence that they and their families deserve,” he said.