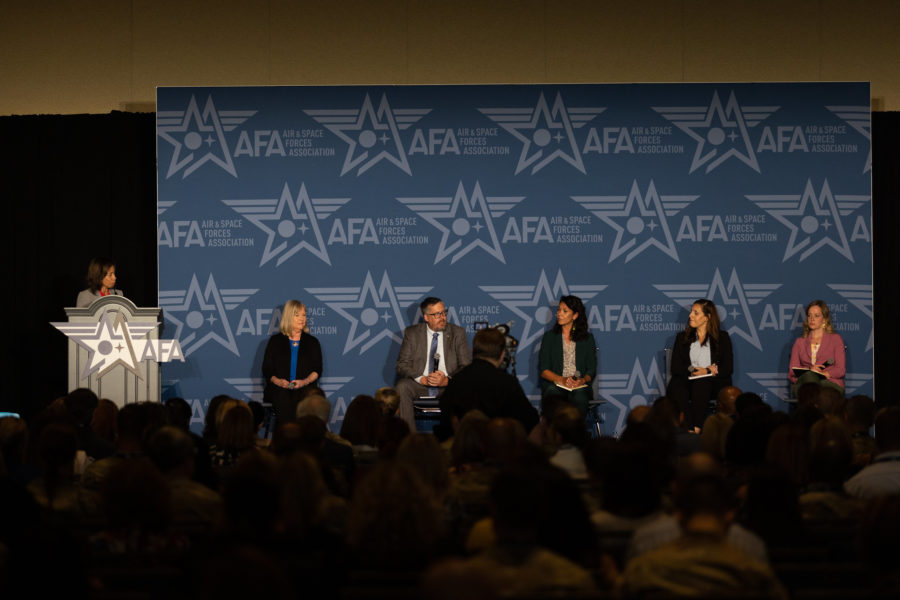 Sharene Brown knows firsthand the contributions military spouses make, and she’s committed to improving the lives of those challenged by the military lifestyle that came with marrying a military member.

“There is no doubt our spouses make a difference, serving alongside their Airmen and Guardians every day,” said Brown, the wife of Air Force Chief of Staff Gen. Charles Q. Brown Jr. “You—our spouses—are often the agents of change,” she said as she moderated a discussion Sept. 19 at AFA’s Air, Space & Cyber Conference.

Spouses have led the fights to improve child care, education, and health care, and they continue to lead the fight to ensure spouses can put their professional skills to use when they assume new jobs after permanent change of station moves.

Suzie Schwartz, wife of former Air Force Chief of Staff Gen. Norton A. Schwartz, was a professional before she became a volunteer and spouse advocate. She noted that employment opportunity is a key source of pride for her and others.

“I’m proud that I fought to be able to go to work,” Schwartz said. “I got in trouble for it, but we survived, and that’s not an issue anymore.”

Schwartz admitted she probably made a few enemies along the way, but expressed no regrets.

“I hope, I believe, and I know that I inspired others to find their voice and do their best to make a difference,” she said.

As a staffer for two U.S. senators, panelist Heba Abdelaal learned before she became an Air Force wife that spouses who contacted Capitol Hill offices where she worked typically did so as a last resort.

“Everything’s gone sideways, they don’t know where to turn for help—you’re their last resort,” Abdelaal told the audience.

“All those kinds of issues do have an impact on people, on their day-to-day ability to do their work and go in fully ready to meet whatever job requirements they’re going to have for the day,” she said.

No one solution will alleviate 100 percent of the problems that need to be addressed, she said. But working on both sides of the political aisle, both sides of Capitol Hill, and with the military and veterans service organizations is essential for finding the best path to resolution, she said.

Eddy Mentzer, a military spouse who works in community support programs at the Defense Department, provided the audience with pointers for addressing their primary concern—a lack of suitable employment.

Mentzer said the Pentagon plans to launch a funded fellowship program in which military spouses will be placed in paid positions with corporations and companies.

“There are organizations out there that are doing this right now, and they are having amazing success,” Mentzer said. “But the fact that the department, with congressional assistance, is able to build on what is already happening is huge.”

Mentzer said more information will be forthcoming by December.

Melissa Shaw, a Space Force spouse, said she and her husband—a former Soldier—had lived in six different homes in just 10 years of marriage. Two of their three children were born in other countries.

“I am never a victim to this lifestyle,” Shaw said. “Obviously, there are times when he doesn’t get a say in what he does. But when presented with choices, we make those choices together. And that makes me feel very empowered.”

Military spouse Kathleen Hedden, a medical professional by training and volunteer spouse advocate, offered advice on both the challenges and opportunities families face during overseas deployments.

The longstanding sponsorship program, Hedden said, proved invaluable in her case. “Just having someone let you know, ‘Hey, you’re going to need a two-phone authentication’ in order to keep access to a CONUS bank account,” was a good example of such advice, she said.

Professional licensure and reciprocity issues that are a headache in the States are enhanced significantly overseas, Hedden added. Questions about schools also loom.

“You don’t know what you don’t know,” Hedden said. “It’s been 13 months [since her family moved to Germany], but I still feel like I just got there.”

Hedden particularly appreciated the spouse who stepped forward when they first arrived in country riddled with jet lag, with two young children and a dog.

The woman called and said, “You’re going to get in the car, and I’m going to take you to the commissary,” Hedden said.

Hedden said she was merely going through the motions while the two loaded the cart up with groceries.

“When I woke up the next morning with at least six hours’ sleep, I was so grateful to open my fridge and have things I wanted, and things for the kids,” Hedden said. “Kindness is free. Give it out.”