McPeak Speaks Out on F-22

Although the Obama Administration, 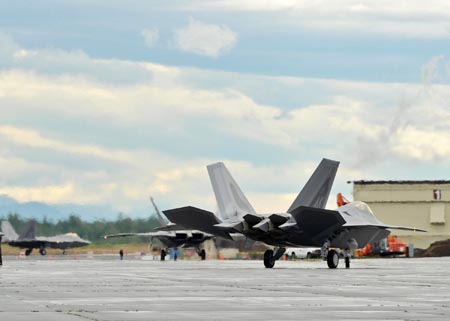 together with its Congressional allies, has seemingly succeeded in ending production of the F-22, retired Gen. Merrill McPeak, 14th Air Force Chief of Staff and the national co-chair of Obama’s successful Presidential campaign, is still rising to the defense of buying more F-22s. (He spoke out last month, too.) In a Wall Street Journal op-ed piece Aug. 9, McPeak argues that the strength of the Air Force is the key in making the US military unbeatable in any high-end conventional conflict. Capping F-22 production “at just 187 planes,” he argues, is “well short of establishing the fleet size we need.” It has been more than 50 years “since any American soldier or marine has been killed, or even wounded, by hostile aircraft,” McPeak writes. “For the life of me,” he continues, “I can’t understand why we should wish to change this” by limiting the nation’s future air combat capabilities and allowing peer competitors to rise in the process.