Skip to content
A notional B-21 Raider flies over California's real Edwards Air Force Base in this illustration. First flight is anticipated in the first six months of 2023. Northrop Grumman
Expand Photo 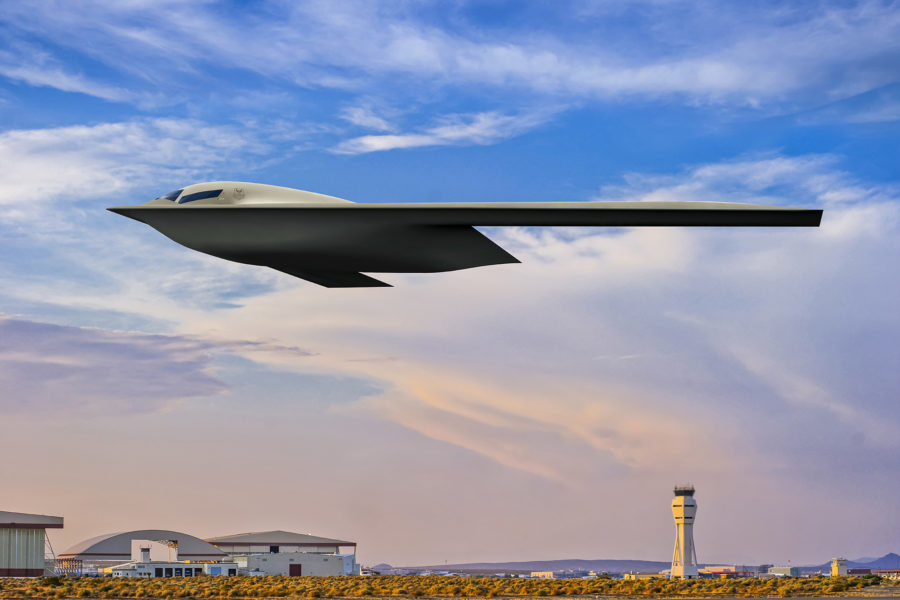 The B-21 Raider will roll out of Northrop Grumman’s Palmdale, Calif., plant in early December, Air Force acquisition executive Andrew Hunter said Sept. 20, but how much of the airplane will be visible remains to be seen.

During a press conference at AFA’s Air, Space and Cyber event in National Harbor, Md., Hunter said the new bomber will emerge from the factory “the first week of December,” meeting USAF’s forecast to roll it out this year. Sources have said labor and supply chain issues have held up many programs.

“You probably won’t see it from all aspects,” he said. The Air Force doesn’t want China and other potential adversaries any more information about the aircraft than is necessary. He declined to say whether features of the airplane will be concealed with tarps, or whether the aircraft will only be visible through a hangar door. A Northrop Grumman spokesperson said “it will not be a limited reveal,” but as with the B-2, photographs will be restricted from some angles.

As to when first flight is expected, neither Hunter nor Armagost would specify, saying flight testing will be event-driven.

When the B-2 bomber rolled out in 1988, attendees were oriented such that they did not have a view of the rear deck of the aircraft, which featured an innovative new exhaust system to mask the jet’s infrared signature. However, journalists flew a small airplane over the plant and photographed it from above, making the concealment moot. The features were further exposed when taxi tests began.

Former Rapid Capabilities Office director and B-21 program executive officer Randall Walden, now an adviser to Undersecretary of Defense for Acquisition and Logistics William LaPlante, has previously said a number of outside-the-factory activities for the first B-21 aircraft, such as engine run-ups and taxi tests, will swiftly be follow the rollout.

Calling the new bomber a “sixth-generation aircraft,” Northrop Grumman said in a press release that the roll-out will be an invitation-only event.

“Northrop Grumman is proud of our partnership with the U.S. Air Force as we deliver the B-21 Raider, a sixth-generation aircraft optimized for operations in highly contested environments,” said Tom Jones, corporate vice president and president for Northrop Grumman Aeronautics Systems.

Doug Young, sector vice president and general manager at Northrop Grumman Aeronautics Systems, added: “The B-21 is the most advanced military aircraft ever built and is a product of pioneering innovation and technological excellence.”

The first B-21 is considered “production representative”—not a prototype. It will be very similar to the operational bomber, Armagost said.

Melissa A. Johnson, now directing the RCO, said the B-21’s open-architecture design will allow it to be modified and reconfigured as the threat changes.

Asked if the Air Force has advanced its thinking on how many B-21s will be built, Armagost reiterated the service’s usual comment that it plans to build “at least 100.”

As for a final figure, he said, “Fortunately, we don’t have to decide that now.”

The first B-2 Spirit bomber was delivered to its operating base of Whiteman Air Force Base, Mo., Dec. 17, 1993, the 90th anniversary of the Wright Brothers’ first flight.