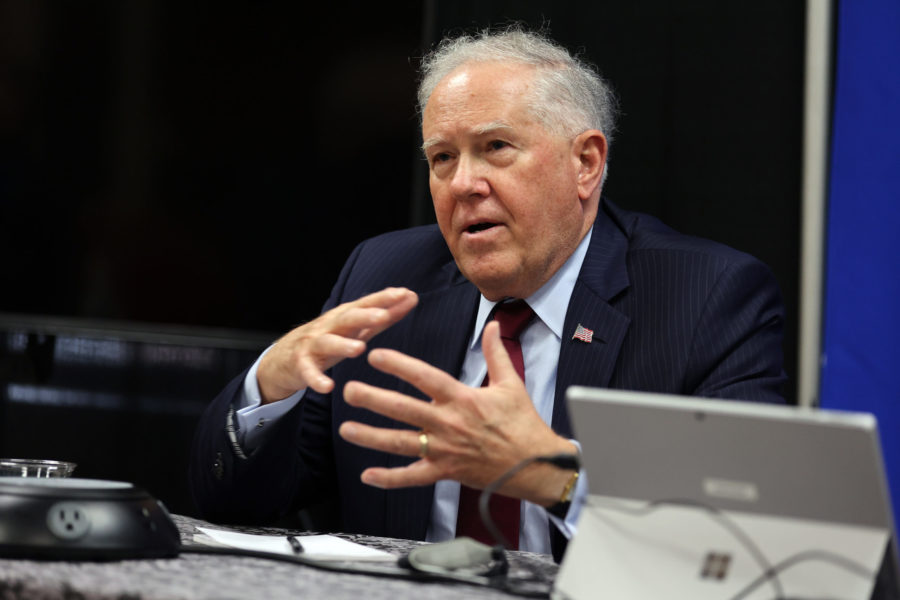 In a virtual Defense One symposium, Kendall listed his top seven priorities, saying all of these areas are coming under intense scrutiny in order to get the “direction right” for technology and organizational efforts and “improving our ability to function as an institution.”

“We’ve got to get that right,” Kendall said. “We’ve got to bring the Space Development Agency into the Air Force pretty soon.”

This will lead to “distributed architectures that are more resilient, as well as capitalizing on commercial applications.”

But it must all be made more coherent, in concert with the Intelligence Community, and be integrated into a Joint All-Domain Command and Control (JADC2) system, he said.

Kendall said the Air Force depends on forward air bases for all its tactical aircraft deployments, but China and Russia are “building mechanisms to attack those bases. We’ve got to figure out what mix of hardening, deception, dispersion, … Agile Combat Employment, and other measures we can take to give us the capability we need there.”

“What we need to do there is focus it more than it has been in the past [toward] operational return on investment,” he said. The Air Force should emphasize ABMS elements that “really pay off in an operational sense. That linkage hasn’t been clear, so far.”

“If we’re going to be in a many-on-many situation, we’ve got to sort out a lot of targets and get that information to the people who can engage [them], preferably at long range,” Kendall said. “How do we do that? It’s a combination of space sensors and airborne sensors, … a tight coupling of ABMS and JADC2.”

The E-7—or other platforms under consideration which Kendall didn’t mention—would “fill a gap temporarily” to those space-based systems. The E-3 AWACS and E-8 Joint STARS have become too vulnerable and too attractive as targets to continue using them for the long term, he said. While once it would have taken a prohibitive number of enemy fighters and missiles to reach them and shoot them down, recent analysis indicates that adversaries “would probably spend that many fighters … trying to get to [them] and kill them.”

How the Air Force Goes to War

Kendall said he’s looking for vulnerabilities in the supply chain, including the industrial base, “our logistics systems, our personnel systems, [and] our transportation systems.” He plans to take “a hard look at all that,” to determine where the chain may be more vulnerable “than we can tolerate” and take steps to mitigate those.

“Basically, the idea here is that you have, … nominally, up to five” unmanned aircraft escorting a single F-22, F-35, or the fighter platform element of the Next-Generation Air Dominance system. The pilots of these aircraft are “essentially, calling ‘plays,’ and … using those other unmanned combat aircraft … as a formation to do things that make sense, tactically.”

This approach will create a wide range of combat “opportunities,” Kendall said. But the exact mix of aircraft and the “pre-programmed … plays … are all things that we have to sort out, so we’re getting that one started.”

“The B-21 is a very expensive aircraft” and Kendall wants to “amplify” its capability with more range and weaponry, delivered by escort aircraft, although he said the term “escort” or “accompanying” is not necessarily how it will be employed.

“The tactics are very much to be determined,” he said.

These aircraft will be networked together, controlled by an operator onboard the B-21, to operate “as a formation in some loose sense … against a modern enemy.”

The unmanned aircraft build on the “Skyborg” demonstrations of the last few years, but “what I’m describing is an acquisition program; a weapon system procurement program,” Kendall said. He told press last week that he plans to get the two new aircraft into the fiscal 2023 budget submission.

“We’re going to go from demonstrations and experiments and technology maturation and risk reduction into full-scale development, or engineering, manufacturing, development, production,” he said. While it will take some time to “sort all that out, … we’re going to get on with building something … It’s a commitment to go forward.”

He said that despite previous efforts, “we hadn’t committed to [a program of record] before. So that’s a major change, actually.”

There’s “a fair amount of analysis work to do,” Kendall said, and he’s moved his analysis shop from the A9 to the Secretariat, “to support both the Air Force and Space Force.”

The two new aircraft programs, he said, will be “acknowledged classified” programs, meaning that their funding will be public but details of the systems will be held closely to avoid giving China “a head start” in figuring out countermeasures.

“One or two of something often isn’t meaningful … It’s interesting and it helps you learn, but it doesn’t get you where you want to be, operationally.”

Although Kendall acknowledged that the B-21 is expected to fly in 2022, “You’re not going to see much of it,” to avoid compromising its technologies, he said.

The NGAD has been underway since Kendall was the undersecretary of defense for acquisition, technology, and logistics, but has gone beyond the technology demonstrator stage, he said. It has “moved forward very well” and will be the next-generation fighter after the F-35, but as part of a system of systems, Kendall noted. The other elements of the system, he said, “will be backward compatible” to fourth-generation aircraft, as well.