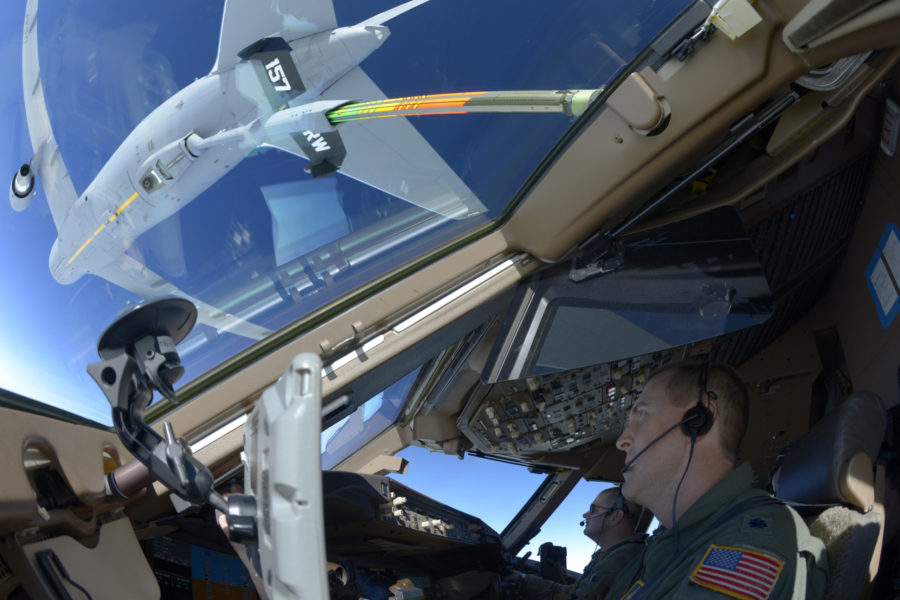 A KC-46A Pegasus flew a 36-hour nonstop mission that covered more than 16,000 miles from Nov. 16 to Nov. 17, the Air Force announced. Crews traveled from Pease Air National Guard Base, N.H., over North America, Hawaii, and Guam, before retracing their path and landing back at their home base. The flight was the longest Air Mobility Command mission to date.

“This extended mission is yet another example of capable Airmen taking charge and moving out to accelerate our employment of the KC-46A,” Gen. Mike Minihan, the head of Air Mobility Command (AMC), said in a statement.

The aircraft took off from a snow-covered base in New England and refueled the F-22 Raptors over sun-splashed light blue waters in the Pacific. A six-minute video captures scenes from the mission.

AMC has pushed to prove the capabilities of its approximately 40 KC-46s in 2022. In May, the aircraft flew over 24 hours in non-stop sortie. In September, the aircraft was cleared for worldwide combat operations. A KC-46 recently flew without a co-pilot to test operations with a bare-bones crew. Minihan has said he plans to employ AMC’s fleet in new ways.

The KC-46 has faced issues since the Air Force first took delivery of the aircraft in 2020. Its refueling system as been troubled, facing issues with the boom and the Remote Vision System (RVS) used to operate it. Relying on an array of cameras and monitors, the RVS can wash out or cause depth perception issues in certain conditions. The fix has been put off until 2025 after Boeing and the Air Force said they had supply chain troubles and regulatory hurdles that would delay it.

The boom is also facing a redesign. The refueling pipe requires a new actuator that will allow the boom to refuel all aircraft. A KC-46 had a mishap in October while it was refueling another aircraft that caused damage to the tanker.

In a statement in early November, Mosquera said the incident occurred “after experiencing a problem with the refueling system, causing damage to the boom and fuselage.”

Mosquera said the boom fix, or the Boom Telescoping Actuator Redesign (BTAR), will not be retrofitted to the fleet until the beginning of fiscal 2026. The Air Force has not released the results of its accident investigation or whether the issue being addressed by the redesign caused the incident.

Without the redesign, the KC-46 cannot refuel A-10s, which are “too thrust-limited to overcome the stiff boom issue,” according to Mosquera.

She recently told Air & Space Forces Magazine that Boeing’s subcontractor for the part, Moog, was facing “issues getting a compliant actuator.”

Despite the issues, Mosquera said the Air Force determined that the KC-46 was fit for worldwide deployment after the service updated “crew training, techniques, and procedures to work around known limitations.”

Even though the aircraft has unresolved flaws, Air Mobility Command has sought to demonstrate the capability of its newest tanker with endurance missions.

“Pease’s accomplishment of this mission is the third consecutive success proving the KC-46A’s airborne persistence, building on previous 22- and 24-hour missions,” Lt. Col. Joshua Renfro, the head of AMC’s KC-46 cross-functional team, said in a statement.

During the day-and-a-half mission, the KC-46 was refueled by two different KC-46s positioned at Joint Base Pearl Harbor-Hickam, Hawaii, in preparation for the mission. Three aircrews took turns at the controls of the KC-46 during the extreme-duration flight: two New Hampshire Air National Guard crews from the 133rd Air Refueling Squadron and one Active-duty crew from the 64th Air Refueling Squadron. Both squadrons are under the command of the 157th Air Refueling Wing at Pease Air National Guard Base. During the mission, the KC-46 fueled F-22 Raptors in a closed-loop pattern off the coast of Hawaii, the 157th Air Refueling Wing said. The aircraft continued west to the U.S. territory of Guam, crossing the International Date Line before turning back home and returning to New Hampshire.

The aircraft carried a total of 16 crew, including pilots, boom operators, aircraft maintainers, and a flight surgeon during the multi-day trek. Overall, the mission was part of a commitment by AMC to learn more about their aircraft and Airmen.

The mission’s flight surgeon, Maj. Heidi MacVittie, used a NASA app to track data about the pilots, such as their reaction time. The goal was to learn if using multiple, more rested crews is preferable to the Air Force’s current practices.

“The goals were to test the aircrew’s ability to self-assess and also evaluate whether using multiple crews on a work-rest cycle would be preferable to the current standard practice of utilizing alertness medications to sustain a crew for a long durations of work,” Mosquera said. 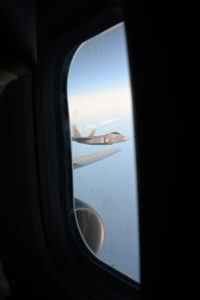 An F-22 Raptor waits for gas just off the wingtip of a KC-46A Pegasus aerial refueler from the 157th Air Refueling Wing, Nov. 16, 2022. The KC-46A was performing a 36-hour endurance mission, flying non-stop from New Hampshire, across North America and the Pacific Ocean, around Guam, and back home again. The proof-of-concept operation showcased the ability of the Air Force’s newest tanker to project the force in the modern battle space. (U.S. Air National Guard photo by Senior Master Sgt. Timm Huffman) 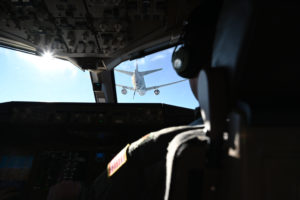 Maj. Bill Daley, a pilot with the 157th Air Refueling Wing, Pease Air National Guard Base, New Hampshire Air National Guard, flies his KC-46A Pegasus up to another KC-46A, also from the 157th ARW, to take on fuel, Nov. 16, 2022. The refueling took place as part of a 36-hour endurance sortie that took place from Nov. 16-17. The mission was crewed by active duty and Air National Guard Airmen from Pease, who flew the jet non-stop from New Hampshire, across North America and the Pacific Ocean, around Guam, and back home again. The proof-of-concept operation showcased the ability of the Air Force’s newest tanker to project the force in the modern battle space. (U.S. Air National Guard photo by Senior Master Sgt. Timm Huffman) 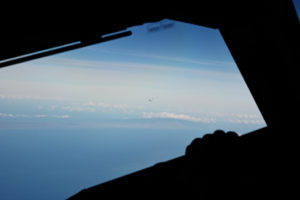