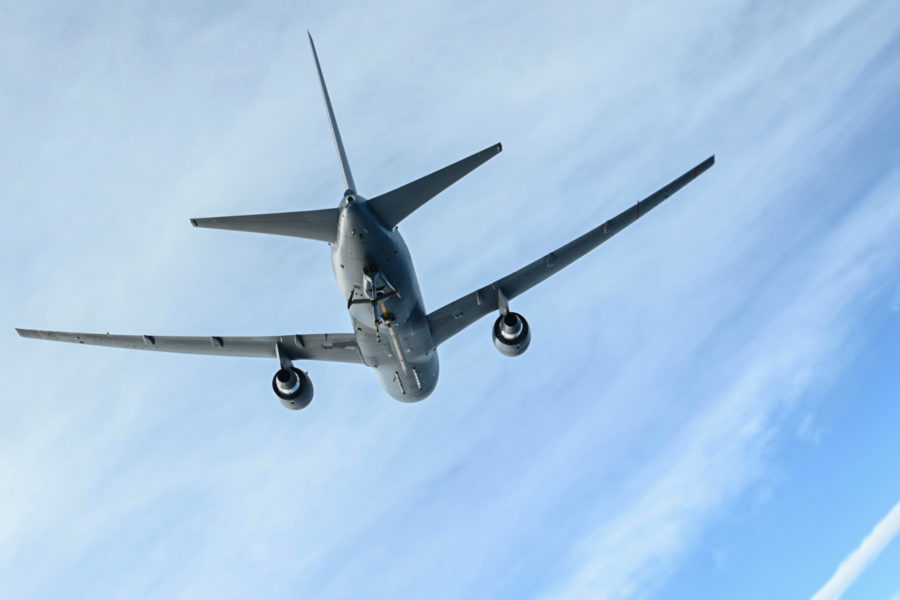 Air Mobility Command is investigating a potential Class A mishap involving a KC-46 Pegasus tanker that left the plane’s boom and fuselage damaged in October.

The incident, which occurred Oct. 15, was first reported by Air Force Times after images circulated on social media showing the refueler with a cracked boom and a dented tail cone. AMC spokesperson Capt. Natasha Mosquera confirmed the details to Air & Space Forces Magazine.

The KC-46 in question belongs to the 305th Air Mobility Wing from Joint Base McGuire-Dix-Lakehurst, N.J., and was flying back to the base from the United Kingdom when it experienced an “in-flight emergency after experiencing a problem with the refueling system, causing damage to the boom and fuselage,” Mosquera said.

Air Force Times reported that the problem occurred while the KC-46 was refueling an F-15 due to the two planes flying at such different speeds that the boom forcibly broke away from the fighter and hit the KC-46.

Mosquera told Air & Space Forces Magazine that the cause of the problem had not been determined, with an investigation scheduled to conclude in late November.

The Air Force defines Class A mishaps as those that result in a death or permanent disability, cause more than $2.5 million in damage, or result in the destruction of an aircraft. No injuries were reported from this mishap.

The final cost of the incident, however, won’t be determined until the investigation is complete. After that, AMC may convene an Accident Investigation Board to study the issue further.

The 305th AMW first began accepting KC-46s just shy of a year ago.

The Pegasus has endured a high-profile series of problems that limited the tanker’s operations for months and delayed declaration of initial operational capability by years. It was only this past September that the Air Force declared the aircraft ready for worldwide deployments and combatant commander taskings, including in combat, with the sole exception of the A-10.

Among those issues, the Air Force determined several years ago that the KC-46’s boom was too stiff, meaning it “would not extend or retract during flight testing unless subjected to more force” than some aircraft could manage, according to a Pentagon inspector general’s report.

At the same time, the service also uncovered problems with the aircraft’s Remote Vision System, the setup of cameras and monitors the boom operator uses to connect the tanker to the refueling aircraft.  The system has been found to wash out or black out in certain conditions, such as in direct sunlight, and sometimes causes problems with the operator’s depth perception. That creates the risk of the boom operator accidentally hitting the aircraft the KC-46 is refueling.

Both the boom and RVS problems have been labeled Category 1 deficiencies, the most serious, and are still unresolved. Mosquera confirmed to Air & Space Forces Magazine that fixes for both issues are still years away.

However, it is still not clear whether either of those problems contributed to the recent mishap, and Mosquera indicated that there have been no extra alerts or precautions put in place because of it.

“AMC is confident in the KC-46’s ability to project and connect the Joint force worldwide and will continue to meet global taskings in support of combatant command requirements,” she said.