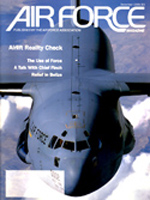 By John T. Correll
So, are we now to believe it was ground power that carried the day in Kosovo?

By John A. Tirpak
Air Mobility Command took the Kosovo operation in stride, but there weren't enough tankers and airlift

The Use of Force

The Navy in the Balkans

By Bruce D. Callander
Military skills in the field become part of basic training at Lackland.

A Talk With Chief Finch

During the 1990s, the Air Force’s overall Mission Capable rate has fallen by almost 10 percentage points.

The Rise of Air Defense

By Walter J. Boyne
In its heyday, it included a Ground Observer Corps, radar picket lines in the far north, SAGE centers,

By John A. Tirpak
The air campaign followed a strategy of gradualism because there was no consensus within the alliance

By Peter Grier
New York ANG Unit Stages Polar Rescue An aircraft and crew of the New York Air National Guard on Oct. 16 dashed through brutal cold and into the depths of Antarctica to rescue a doctor who had been diagnosed with...