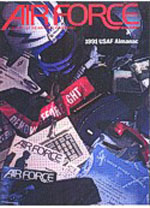 The Decision to Fight

By John T. Correll
Desert Storm set the right example for when and how US troops should be committed to combat.

Washington Watch: McPeak on the War

By Robert S. Dudney
The Iraqi Air Force was not a featherweight opponent, the Air Force Chief of Staff says. Its misfortun