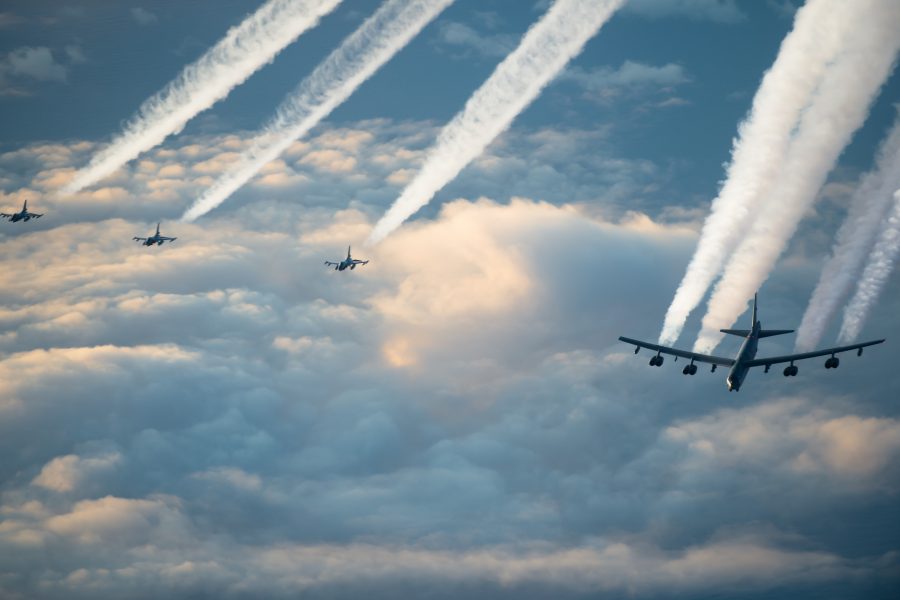 The years-old idea of an “arsenal plane,” a flying munitions truck that could accompany fighter jets and unmanned aircraft into battle, is now adapting to include the Air Force’s new technology pursuits.

As the Air Force evolves its thinking on the prospect of an arsenal plane—whether that be an existing bomber like the B-52, a cargo plane like the C-130, or something else entirely—top service officials are acknowledging the need to consider hypersonic weapons and new ideas in battle management.

Will Roper, the Air Force’s assistant secretary for acquisition, technology, and logistics, suggested at a Nov. 12 Defense Writers Group breakfast that the service’s bombers are evolving to fit the concept of an arsenal plane.

“If you look at our force going forward, a lot of the programs that we have are turning the bomber force into something else,” Roper said. “A B-52 with a lot of hypersonic weapons on it is, I will call it a bomber, but it’s certainly not dropping things down—quite the opposite, right? It’s almost a missileer instead of a bomber.”

Roper said he and Air Force Global Strike Command boss Gen. Timothy Ray have been moving through many reviews as the service works to put hypersonic weapons on the B-52. Global Strike is also exploring the idea of expanding the B-1’s weapons capacity from 24 to 40 munitions, according to an Air Force release, though the B-1 and B-2 are slated to retire in the coming decades, leaving the B-52 and the future B-21 to make up USAF’s bomber fleet.

In September, Ray told reporters the B-1 could carry hypersonic weapons on its external hard points and at least four internally, as well as ferry the Joint Air-to-Surface Standoff Missile, its extended-range variant, and the Long-Range Anti-Ship Missile.

Ray told Air Force Magazine in a Nov. 13 interview that arsenal plane experiments will take place over the next few years, and will begin to tap into the broader, networked Advanced Battle Management System idea the service is pursuing.

“Some are are pretty sensitive, some are in the formative stage,” Ray said. “We’re going to tie as aggressively as we can to where the air battle management, all-domain [command and control] experimentation game plan is going on for the United States Air Force, because you have to connect everything that shoots to this sensing and this kill chain grid that’s under development.”

Roper indicated that what constitutes an arsenal plane may come down to how an aircraft is used, not only whether it offers a new design. That means planes outside the Air Force could fit the bill, too.

“Can we think more broadly, about how an airplane carrying a lot of weapons can be looked at?” Roper said. “There are a lot of other systems that are currently in development, even some outside of the Air Force, that seem to make sense. … We want to take a broad look at, how does the standoff bomber work in the contested environment in a way that’s complementary with the stand-in B-21?”