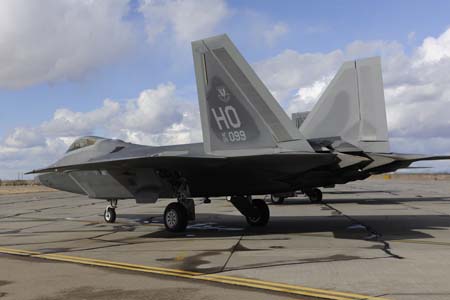 Air Force Base is losing its Raptor mission under the Air Force’s F-22 consolidation plan announced Thursday. Instead, one of the two New Mexico-based combat squadrons will transfer to Tyndall AFB, Fla., the site of F-22 training. Thus, Tyndall will gain an expanded role in F-22 operations. Holloman’s second squadron is being split, with six of its F-22s going to Langley AFB, Va., six to Elmendorf AFB, Alaska, and two to Nellis AFB, Nev. Langley and Elmendorf are already home to two combat-ready F-22 squadrons apiece. Nellis is where F-22 weapons and tactics development takes place. Air Force spokesman Gary Strasburg told the Daily Report that Tyndall is slated to receive 21 fighters from Holloman. In USAF’s announcement, Kathleen Ferguson, deputy assistant secretary for installations, said this fleet consolidation “maximizes combat aircraft and squadrons available for contingencies.” These actions will be finalized when the environmental impact studies mandated by law are completed.