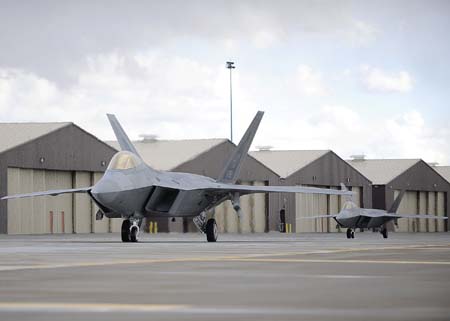 A contingent of 12 F-22s and about 250 airmen from the 49th Fighter Wing at Holloman AFB, N.M., is deploying this week to Kadena AB, Japan, as part of a normal rotation of combat forces to US Pacific Command’s area of responsibility. Holloman expects this force package to remain at Kadena for approximately four months. “This will mark the first time F-22s from Holloman have deployed to the Western Pacific to train in a forward location, while maintaining a credible deterrent posture and presence in the region,” said Col. David Sullivan, 49th FW vice commander. Previously F-22s from the 3rd Wing at Elmendorf AFB, Alaska, have been dispatched to Kadena as part of these combat rotations. Along with Holloman’s Raptors, the Air Force is sending a similarly sized F-22 force this week from the 1st FW at JB Langley, Va., to Andersen AFB, Guam. (Holloman release)

Much About the Air Force’s New B-21 Bomber Remains a...