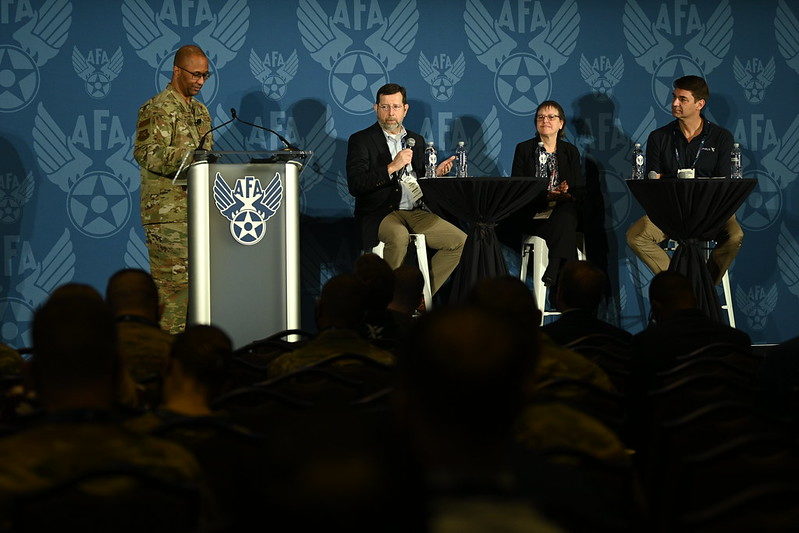 Full-Spectrum Employment Is an Industry Priority for EMS Warfare

With peer adversaries gaining ground in electromagnetic spectrum warfare, the U.S. military must employ the entire spectrum to protect warfighters and press the advantage, a panel of industry experts said. Speaking at the AFA Warfare Symposium on March 4, the experts in EMS warfare also urged agile development to keep pace with the threat.

Complicating the strategic picture is greater signal density from commercial as well as military use, said Lisa Aucoin, vice president of F-35 Solutions at BAE Systems.

“Relying on stealth as we have in the past is no longer a sole option,” Aucoin said. “I think one of the key pieces here is employing the entire spectrum, not only [radio frequency], but [infrared], to kind of branch that range of frequencies, to enable us to detect more threats in real time.”

After Air Force Chief of Staff Gen. Charles Q. Brown Jr. declared in January 2021 that the service had been “asleep at the wheel” for the past three decades in EMS warfare, the Air Force has intensified its pursuit for dominance in that space. It released an Electromagnetic Spectrum Superiority Strategy in April and has made big shifts, including the creation of the 350th, to prioritize spectrum warfare.

The Air Force also announced in February that it had achieved initial operating capability of the Legion pod, an infrared search-and-track sensor designed for integration with the F-15C Eagle.

“These new techniques will evolve as the threat evolves, and we have to go faster than our adversaries,” she said.

Lowery, who previously worked as chief engineer for the Navy’s Next-Gen Jammer program, said solutions dependent on software rather than hardware can help the Defense Department become more agile and available to adapt at the speed of enemy threats. Epirus’ flagship product is an open-architecture system that uses high-power microwave technology to neutralize enemy drones.

“A warfighter has a threat they haven’t seen before. We identify it. We study it. We send out to the field real-time, over-the-air updates,” he said. “And now that threat can be taken care of.”

Further investment in research and development, Aucoin said, could help the Defense Department to extract more signal information from the spectrum it can access. Also, she said, it’s important to begin thinking about and employing the spectrum in a holistic, collaborative way.

Report: New Intelligence Offices Could Benefit US in ‘Techno-Economic Competition’

A new report suggests that the U.S. military’s “technological edge” could erode—the Defense Department no longer able to fulfill its commitments or to project power in the customary way—if the U.S. doesn’t become a better-informed player in the global “techno-economic competition.” To that end, a one-year-old think tank with its…