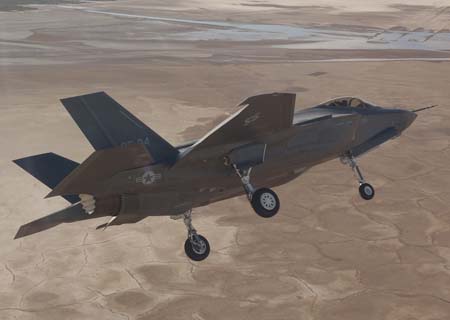 the fifth and final F-35A test aircraft, has arrived at Edwards AFB, Calif., for flight testing. Testers will use AF-4 in activities including high-angle-of-attack and air-start trials, according to an Edwards release. This airframe joins AF-1, AF-2, and AF-3, the latter of which touched down there in December, in supporting the F-35 program’s developmental test activities. AF-4 made its maiden flight from Lockheed Martin’s plant in Fort Worth, Tex., on Dec. 30. It arrived at Edwards on Jan. 22, according to a Lockheed release. AA-1, the first F-35A test aircraft retired to live-fire testing at the Navy’s China Lake test range in California after its final flight in December 2009. The F-35 program has achieved a total of 578 test flights thus far. That includes the Marine Corps’ F-35B and Navy’s F-35C test assets. The Air Force’s test program exceeded its target number of flights in 2010 and accomplished more specific test activities than planned, reported Australian Aviation Magazine.