Skip to content
A panel at the Satellite 2021 conference discusses the expanded capabilities that digital transformation will bring to military satellite communications and the challenges that will need to be addressed with industry partners. Staff photo by Shaun Waterman.
Expand Photo 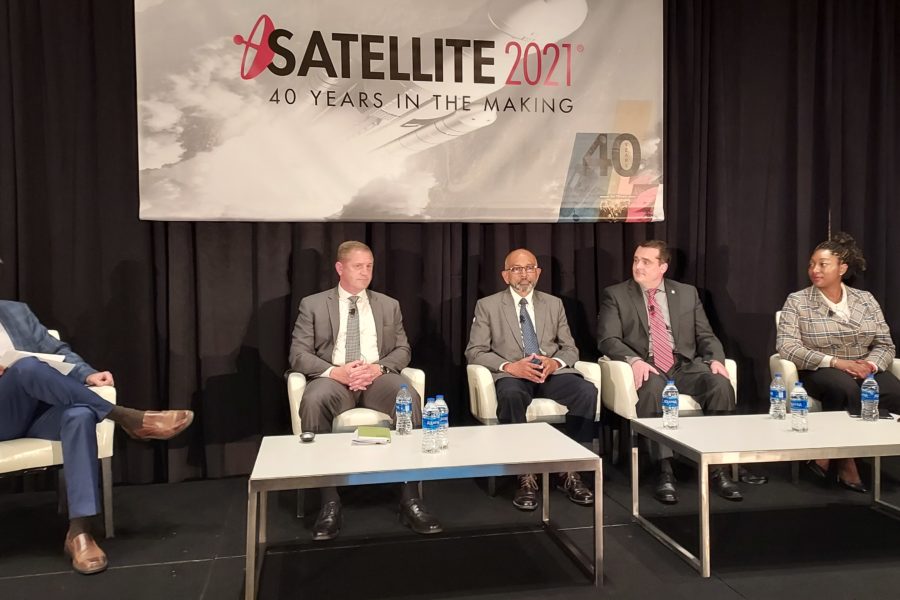 The Department of Defense is finalizing a new technical reference architecture (TRA) for satcom terminals it will buy—a highly detailed description of the engineering requirements for the devices, which maintain global two-way satellite communications for aircraft and other deployed forces.

And for the first time, the TRA, typically a document hundreds of pages long, will instead be produced in digital form, according to Michael Dean, who heads the satcom team for the DOD’s chief information officer.

The digital tool being developed in partnership with the Defense Information Systems Agency (DISA) was “pretty cool,” he told Air Force Magazine on the sidelines of the Satellite 2021 conference. Potential vendors could load in data about the terminals they manufacture and quickly understand where their products might fall short, rather than having to pore over hundreds of pages of a PDF. “You just click … and it kind of tells you that, ‘no, you’re out of tolerance, or yes,’” you’re in conformity, Dean said.

The TRA tool will also gather data required for the DOD’s rigorous certification process, which ensures satcom terminals actually conform to their own specifications. “That can take a long time,” Dean said, so the tool was designed to capture as much of the data required for certification as possible. When vendors “build their terminal design, and they plop it in [to the digital TRA], then when the folks that do the assessments … look at it, a lot of the work is already done for them.”

The TRA is currently undergoing an internal approval process, Dean said, but he hoped to have it finalized by the start of 2022. “So we’re in the final stages—it seems to be on track,” he said, adding that he’d know by November if they would make their end-of-year target.

One new requirement in the TRA, Dean said, would be for an automated registration function for new satcom terminals, part of an effort to get a better handle on DOD satellite communications called the satcom enterprise management and control environment.

Dean explained that the DOD currently relies on manually compiled spreadsheets to keep track of its terminals: “It’s a data call—it’s a manual process. It’s very labor intensive.” Because all the data was manually entered, it was not authoritative. “It’s hand jammed—you can make mistakes. And so you’ve got bad data. You’ve got duplicated data,” he said.

That matters because terminals need access to a limited resource—satellite bandwidth—which has to be apportioned out. Different terminals have varying capabilities and might employ different frequencies. Without authoritative data on which terminals are out there and what capabilities they have, commanders can’t prioritize resources efficiently, Dean said.