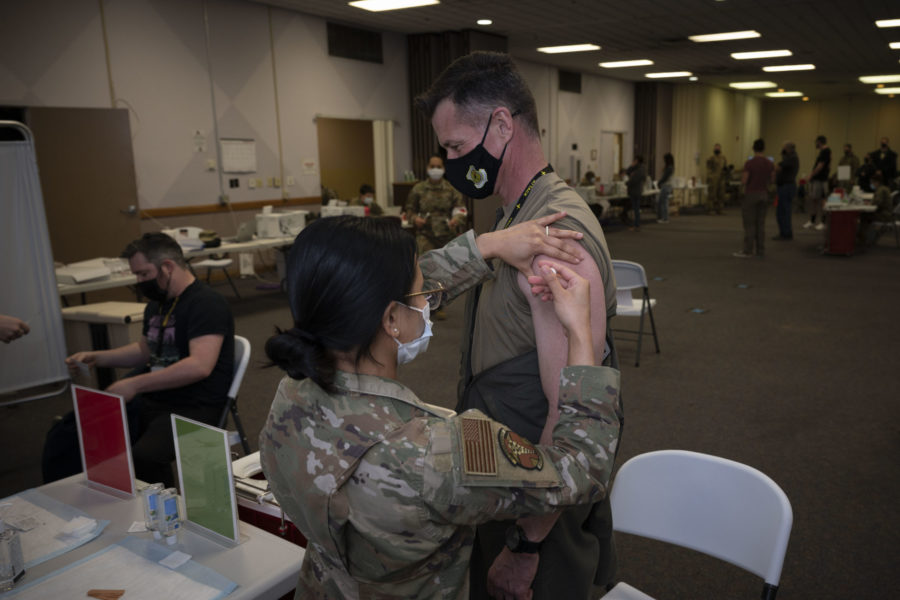 DOD Expects Vaccines Available to All Troops by May 1

The Pentagon expects the broad military population to have access to the COVID-19 vaccine by May 1, with the entire Defense Department vaccinated by July.

Defense Health Agency Director Lt. Gen. Ronald J. Place, in a March 26 briefing at the Pentagon, said the DOD has vaccines underway at 343 sites, in addition to the 3,000 military personnel working at Federal Emergency Management Agency mass vaccination sites as part of the country-wide push to ramp up COVID-19 vaccinations.

So far, the DOD has administered 1.8 million doses of the shots to 1.1 million military members, families, civilians, contractors, and retirees. Of that total, about 600,000 service members have received a shot—about 30 percent of the force, Place said.

The Defense Department, like the rest of the nation, has prioritized the populations who received the vaccines first. The initial focus was on “lowering operational risk and those most vulnerable.” About 60 percent of service members are in the “final tier” or general population that will be last to be open to receive the vaccine.

Place said the broad supply chain has been “working well, with shipments arriving on time.” The Johnson & Johnson vaccine, which unlike the Moderna and Pfizer versions does not require extreme cold storage, has been especially helpful for the military to inoculate service members deployed in remote environments.

As more service members receive the vaccine, the Defense Department has noticed a higher take rate among those troops who declined to receive it when they were first offered. Some troops have been offered the vaccine three or four times, and eventually decided to receive it, Place said.

Senior military leaders have been encouraging service members to receive the vaccine as soon as possible. For example, Acting Air Force Secretary John P. Roth visited multiple Air Force bases recently, and encouraged Airmen and Guardians to get the shot when it is available to them.