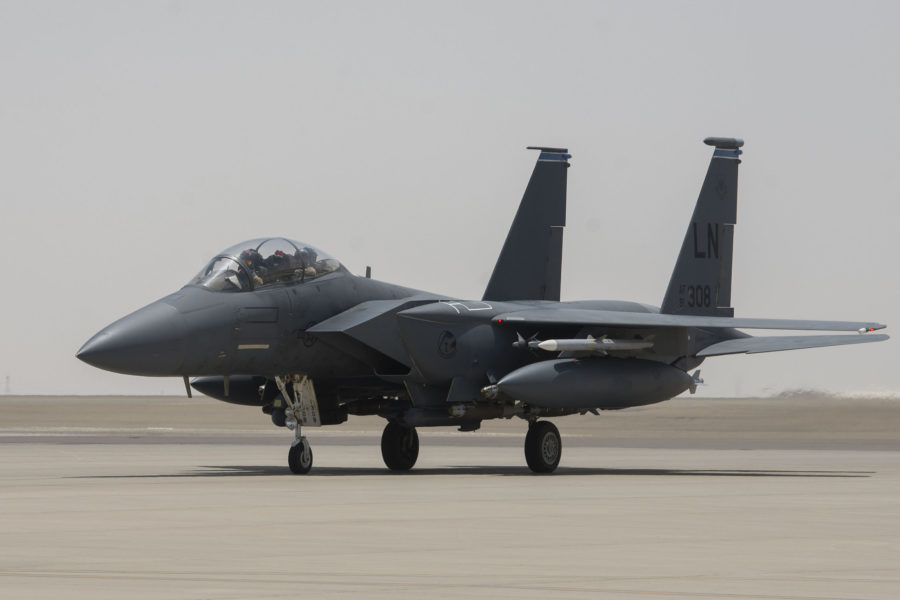 F-15Es that deployed to the Middle East on April 25 proved their ability to move bombs in a “tactical ferry mission” just two months after the concept was originally tested.

Six Strike Eagles flew to Al Dhafra Air Base, United Arab Emirates, from another deployed location carrying twice their standard load of bombs, reducing the need for mobility aircraft to ferry the broken-down bombs closer to the fight. Airmen were able to increase the munitions load by using hardpoints that don’t typically carry bombs, such as those used for fuel tanks or targeting pods.

“These F-15Es are carrying what is called a ‘tac-ferry’ load out. What that means is we can maneuver using Agile Combat Employment and be postured to go forward from a main operating base,” said Lt. Col. Curtis Culver, director of operations for the 494th Expeditionary Fighter Squadron, in a release.

The 85th Test and Evaluation Squadron at Eglin Air Force Base, Florida, first proved the capability during a Feb. 22 test, when an F-15E flew with six joint direct attack munitions on a single side of the aircraft. Strike Eagles were authorized to carry a maximum of nine JDAMs, and the test expanded that to 15, according to an Eglin release.

“The Strike Eagle can now carry enough JDAMs for an active combat mission, land at a remote location, and reload itself and/or another aircraft—such as an F-35 or F-22—for additional combat sorties,” 85th TES Commander Lt. Col. Jacob Lindaman said in the release.

Not all of the JDAMs can be dropped in a single mission. However, carrying this many bombs previously required two C-130s to carry the munitions and personnel, who then had to assemble them. The new concept means just one C-130 would be needed for personnel, and the bombs would already be built.

The capability originated from a request by the Combat Air Forces at an annual Weapons and Tactics Conference, according to Eglin.