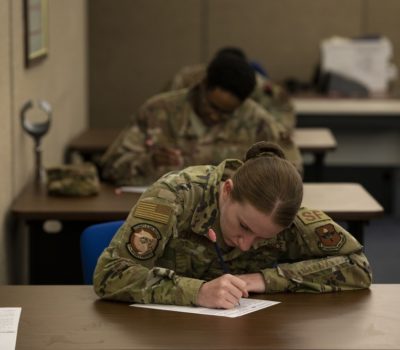 By Greg Hadley
Airmen looking to become NCOs will face a new-look test in 2022, the Air Force announced Dec. 16, as the service emphasizes good judgment in its promotion system. In previous years, the Promotion Fitness Examination included 100 knowledge-based questions. Now, potential E-5s and E-6s will have to answer 60 knowledge questions and 20 “situational judgment test” questions. 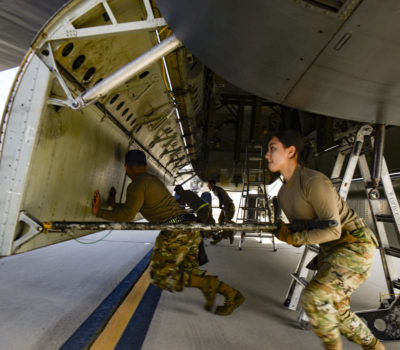 Minot B-52s Fly to Canada Then Calif. to Practice the Bomber Version of ACE

By Abraham Mahshie
Preparing for conflict in the Pacific will require more than learning to fly fighters out of austere locations—it will also call for small bomber crews to go on quick consecutive missions at unfamiliar locations. In a "bomber agile combat employment" (BACE) exercise Dec. 6-8, two B-52s from the 5th Bomb Wing at Minot Air Force Base, N.D., conducted a mission in Canada then flew to Edwards Air Force Base, Calif., for a second mission, this time working alongside Navy counterparts. 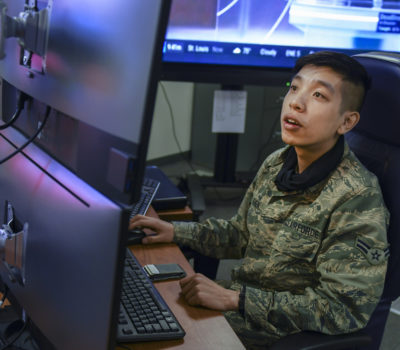 By Shaun Waterman
To achieve the military’s vision of a totally networked multi-domain force, the Air Force must merge its enterprise IT networks, which join the computers on people’s desks and the smartphones in their pockets, with its aerial networks, which connect the sensors and weapons systems on planes. The U.S. can't simply outspend China or other potential peer adversaries, said Kevin Stamey, director of information dominance for the assistant secretary for acquisition technology and logistics—but must rely on an information advantage. 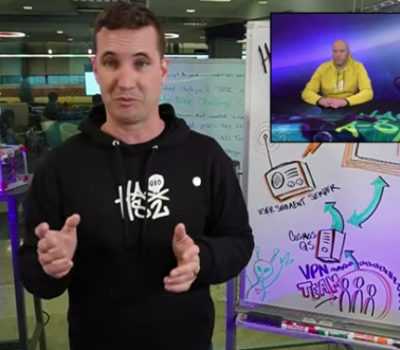 By Shaun Waterman
The Space Force's second-ever Hack-a-Sat competition challenged hackers to find vulnerabilities in earthbound satellite hardware, drawing eight hacker teams to vie for tens of thousands of dollars in cash. But while last year’s inaugural competition proved inspirational, this year's ended amid complaints by participants, who said rules changing on the fly and poor communication by the organizers undermined the event.

Three Medals of Honor, three soldiers, and three winding stories of heroism all came together at the White House on Dec. 16 as President Joe Biden presented the nation's highest military award.

More Than 100 Marines Kicked Out for Refusing COVID Vaccine

The Marine Corps has booted 103 of its members for refusing the COVID-19 vaccine, the service announced Dec. 16, even as all the military branches report that a vast majority of troops have gotten the shots. The news came the same day the Army announced that it had relieved six leaders—including two commanding officers—over the issue and that almost 4,000 Active-duty Soldiers had refused the vaccine.

U.S. military commanders in the Pacific have built a software tool to predict how the Chinese government will react to U.S. actions in the region such as military sales, U.S.-backed military activity, and even congressional visits to hotspots such as Taiwan. The tool calculates "strategic friction," a defense official said. It looks at data since early 2020 and evaluates significant activities that affected U.S.-Sino relations.

President Biden nominated Frank Calvelli to be assistant secretary of the Air Force for space acquisition, the White House announced Dec. 15. Calvelli worked for 30 years at the National Reconnaissance Office and in September joined the consulting firm Booz Allen Hamilton to lead the company’s space and intelligence programs.

The Air Force has awarded an $88.3 million contract to General Dynamics’ ordnance and tactical systems business to produce cannon guns for the F-16. The Air Force Life Cycle Management Center will obligate $7.85 million in foreign military sales funds for the initial order of 20mm M61A1 Vulcan artillery from General Dynamics-OTS, the Department of Defense said.

US Military Shoots Down Drone Near US Base in Syria

The U.S. military shot down a small drone that was believed to be threatening a U.S. outpost in southern Syria on Dec. 14, just weeks after the same base was attacked by drones and rocket fire. Capt. Bill Urban, spokesperson for U.S. Central Command, said two drones were tracked entering the airspace around At Tanf Garrison. “As one of the UAS continued its course deeper into the At Tanf Deconfliction Zone, it was assessed as demonstrating hostile intent and was shot down,” Urban said.

The Latest on Missile Warning & Defense

Recent Russian and Chinese missile launches raised the stakes in space. Find out the latest news on sensing, tracking, and defending against enemy missile strikes.

The EU on Dec. 16 threatened Russia with "massive consequences," "severe cost,” and even coordinated sanctions in the event of any "further aggression against Ukraine," according to conclusions adopted during a European Council summit. But the seemingly tough talk from Brussels masked continuing disagreement among the 27 countries over precisely what action might be taken, as well as uncertainty over whether the EU and international partners, including the U.S. and U.K., had even reached an agreed-upon definition of what would constitute "further aggression" by Moscow.

In a Single Day, the U.S. Air Force Flew Almost Half of Its Best Available Spy Planes Near Russia

The U.S. Air Force has just 17 RC-135V/W Rivet Joints, its biggest and best intelligence aircraft. Nearly half of them were in the air at roughly the same time Dec. 13 and 14, many of them near Russia.

Russia’s latest threat to deploy intermediate-range nuclear missiles in Europe if NATO doesn’t make new promises has one hitch: The U.S.-led NATO alliance says Moscow has already activated such weapons. Moscow wants the U.S. to restart talks over the now defunct Intermediate-Range Nuclear Forces Treaty, which Washington pulled out of in 2019, saying Moscow had already broken the Cold War-era agreement. The treaty put a ban on missiles with a range between 310 and 3,400 miles.

Space Force is celebrating its second birthday with a monthlong STEMtoSpace Campaign, so top leaders made a stop at Thomas Jefferson High School for Science and Technology in Virginia on Dec. 15, including Chief of Space Operations Gen. John W. “Jay” Raymond. Astronaut Col. Nick Hague told students about his experience aboard the International Space Station.

Raytheon Technologies received a $67 million contract from the Space Force to build a weather satellite to provide imagery of cloud cover and other data needed for military operations, the company announced Dec. 15. Raytheon Intelligence & Space was one of three contenders selected by the Space Force’s Space Systems Command in June 2020 to develop space sensor prototypes for the Electro-Optical Infrared Weather System.

Homestead Air Reserve Base in southwest Miami-Dade County, Fla., was evacuated the evening of Dec. 15 after what the base said was a “transportation mishap” involving an explosive device. In a tweet that has since been deleted, the base also asked residents in that area to remain in their homes. A new tweet was sent out saying the all-clear had been given and that the evacuation was due to a “damaged ordinance.”

The C-5M Super Galaxy has been around for 51 years. It’s the largest aircraft in the Air Force’s inventory and hauls the largest equipment. The workhorse has moved NASA telescopes and satellites and brought CH-47 Chinook and AH-64 Apache helicopters around the world. A piece of gear to make sure those missions happen is a 3-square-foot winch that pulls this equipment on and off the aircraft. “What would you do if you needed to load an Apache helicopter on a plane and the winch was broken? You would attempt to order another winch,” said Tech. Sgt. Eric Fanslau, 60th Maintenance Squadron Dash-21 Aircraft Support section chief. “But when there's no more winches, you have to come up with a solution to that problem. We have created Air Mobility Command’s first winch repair facility,” Fanslau said.

Rolling out of the Novosibirsk plant in this video is a Russian S-70 Okhotnik unmanned aircraft known to be for manned-unmanned teaming with the Su-57 Felon.