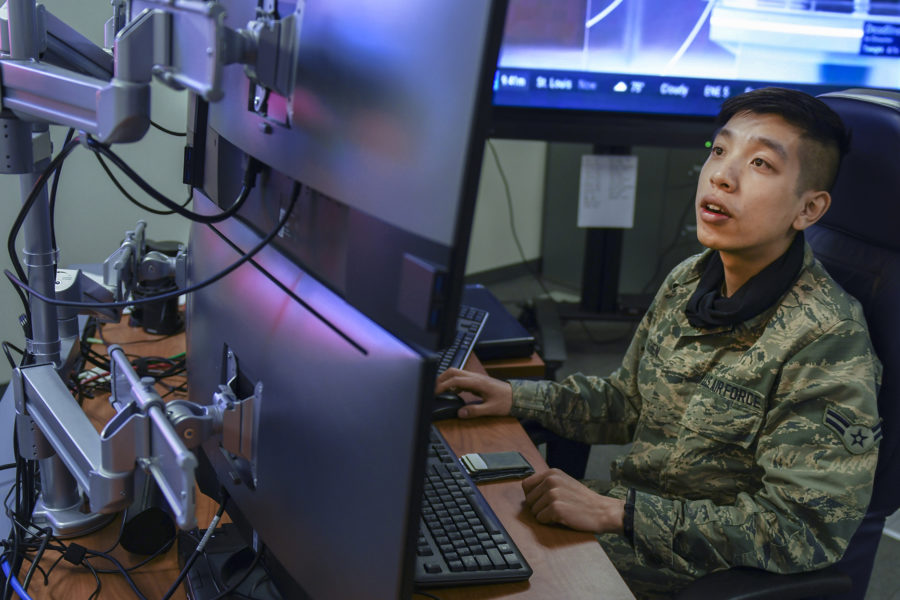 To achieve the military’s vision of a totally networked multi-domain force, the Air Force must merge its enterprise IT networks, which join the computers on people’s desks and the smartphones in their pockets, with its aerial networks, which connect the sensors and weapons systems on planes.

That was the message from Kevin Stamey, the director of information dominance for the assistant secretary for acquisition technology and logistics, who spoke at the AFCEA of Northern Virginia Air Force IT Day on Dec 16.

The U.S. can’t simply outspend China or other potential peer adversaries, Stamey said, but must rely on an information advantage. “And if we don’t find ways to eliminate stovepipes between our IT networks and our aerial and our terrestrial layers, then we’re not going to have the information our warfighters need to dominate,” he said.

Modernization initiatives ranging from Flightline of the Future and smart depots to joint all-domain command and control, or JADC2, “depend on our ability to collapse those stovepipes between the terrestrial and the aerial network layers,” Stamey added.

He called the separation of the two kinds of networks “one of the most glaring stovepipes we have today.”

The JADC2 vision, as Stamey laid it out, requires seamless connectivity between the sensors and weapons systems on a plane or other platform, the rear echelon commanders and planners, and the land or sea forces on the front lines, so that targets can be identified, assigned, and struck.

“Today, that process relies on things like chat [services] or voice calls or single ship-to-shore data links,” he said. “Largely still today, frankly, we complete the kill chain with a very linear process. And there’s a lot of manual manipulation of moving data. …. Weapon systems, ISR sensors, data networks, frankly, still, to this day, operate very much in stovepipes.”

But in the networked force of the future, warfighters will “need to close thousands of kill chains on time-sensitive targets, that are sometimes moving at hypersonic speeds from mobile launchers. And so there’s not going to be time for analysts to gather data and fuse that data and assess that data from all kinds of sources in that same linear fashion that we have in the past,” he said.

Yet the separation between different networks was ingrained in the culture of the Air Force and its industrial base, he said, noting that the title of the conference was “Air Force IT Day.”

“When you signed up … what kind of things were you expecting to hear? … Did you think about email and business systems and cloud migration? You probably didn’t think about bombs on target or warfighting capability or air battle management. But my point is, you should,” he said.

But he added a cautionary note, introduced with a familiar video of an office worker smashing a computer in frustration. “If you couldn’t relate to this guy just a little bit, I’ll just say you probably haven’t worked in the Air Force, or the Department of Defense, for very long,” he joked.

“Many of us, frankly, in the Air Force, have better bandwidth and ubiquitous mobile access to our data at home than we do from our Air Force networks,” he said.

Stamey said the Air Force was experimenting with outsourcing that IT backbone through a program called Enterprise IT as-a-Service (EITaaS), being piloted at nine air bases. “The pilot bases have experienced significant improvement in their user experience,” he said.

Ultimately, EITaaS could encompass everything from desktop equipment and network connectivity to software and network services ranging from email and video conferencing to accounting, personnel, and logistics systems.