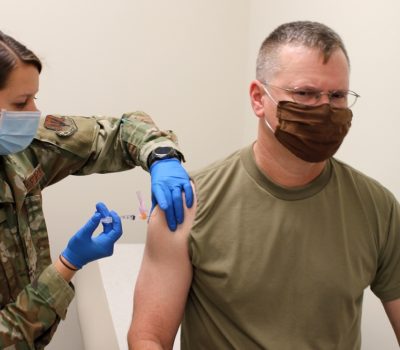 23,000 Airmen and Guardians Unvaccinated as Deadline for Guard and Reserve Passes

By Greg Hadley
More than 20,000 Airmen and Guardians across the Total Force remained unvaccinated against COVID-19 as the deadline for the Air National Guard and Air Force Reserve passed Dec. 2. Out of more than 500,000 Total Force members, 95.3 percent were at least partially vaccinated against the novel coronavirus, according to data released Dec. 3 by the Department of the Air Force, the first military department to set deadlines under Defense Secretary Lloyd J. Austin III’s vaccine requirement. 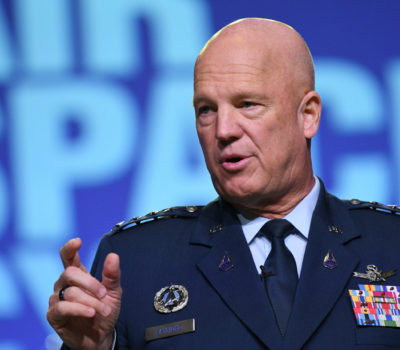 By Greg Hadley
Chief of Space Operations Gen. John W. “Jay” Raymond canceled a trip to California over the weekend after close contact with multiple individuals who tested positive for COVID-19, the Space Force confirmed Dec. 3. Raymond was scheduled to appear at the Reagan National Defense Forum in Simi Valley, Calif., to take part in a panel discussion on the Space Force and the “new space economy.” Vice Chief of Space Operations Gen. David D. Thompson went in his place. 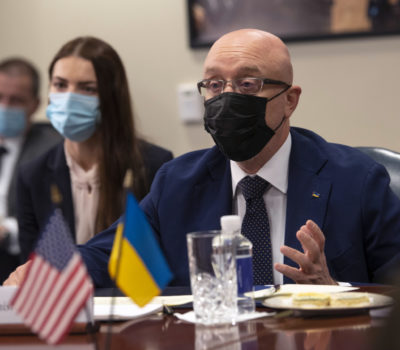 By Abraham Mahshie
A Defense Department team on the ground in Ukraine has been assessing what the country needs to protect itself from air, naval, electronic, and cyber warfare threats as Russian troops have gathered on multiple fronts, a senior Ukrainian defense official told Air Force Magazine, describing an emphasis on what assistance can be delivered “today.” 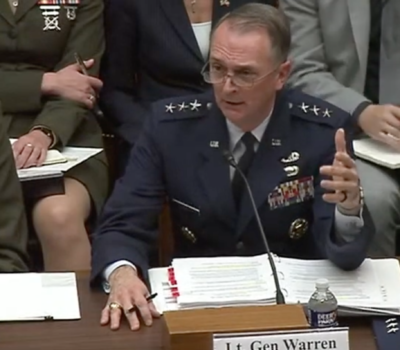 By Greg Hadley
The Air Force uses billions of gallons of fuel every year, the vast majority of it aviation fuel to power its fleet of aircraft. But as the Defense Department seeks to increase its energy efficiency and secure its power grids, the department’s biggest consumer of fuel is looking at ways it can transition to other kinds of more sustainable energy, the Air Force’s deputy chief of staff for logistics, engineering, and force protection said Dec. 2.

Austin Tells Reagan Forum How U.S. Will Take on Challenge of China

"China is not 10 feet tall," Secretary of Defense Lloyd J. Austin III said at the Reagan Library in California on Dec. 4, and the United States is not a "country that fears competition."

“I don't think it's a foregone conclusion they will be the leader in space at the end of the decade, but they are on an incredible pace,” Vice Chief of Space Operations Gen. David D. Thompson said.

Bob Dole, Old Soldier and Stalwart of the Senate, Dies at 98

Mr. Dole, a son of the Kansas prairie who was left for dead on a World War II battlefield, became one of the longest-serving Republican leaders.

The Marine Corps demolition specialist was worried—about America, and about the civil war he feared would follow the presidential election. And so, block by block, he stole 13 pounds of C4 plastic explosives from the training ranges of Camp Lejeune, N.C. “The riots, talk about seizing guns, I saw this country moving towards a scary unknown future,” the sergeant would later write in a seven-page statement to military investigators. “I had one thing on my mind and one thing only, I am protecting my family and my constitutional rights.”

The Defense Logistics Agency has ordered another $315 million worth of GPS modules that can use a new anti-jam signal, bringing the total value of the contract with BAE Systems to $641 million. The purchase will help get more capable Common GPS Modules into the hands of troops, whether in a handheld formfactor or installed in vehicles, aircraft, and munitions. The devices are able to use the advanced M-Code, a military-only GPS signal that is more accurate and provides anti-jamming and anti-spoofing capabilities.

U.S. government funding by continuing resolution instead of Congress passing full-year appropriations has been more the norm than the exception over the past decade, which is “very unfortunate,” Air Force Secretary Frank Kendall said in a Dec. 2 interview. This is particularly bad news for the Air Force and Space Force, which are seeking to modernize legacy systems with new technology to compete with China, Kendall said.

Air Force Mulling How to Train for High-End Fights

One of the biggest training gaps the Air Force faces is preparing for high-end fights with great power competitors Russia and China, officials said Dec. 2. “I would be willing to argue that the highest priority—or the biggest gap—is in that high-end training," said Air Force Col. Nick Yates, the chief of the operational training infrastructure division at Air Force headquarters. "We’re not providing that in the live, and we’re not providing that synthetically.” The service needs to upgrade its training facilities and provide as realistic replication of a threat as it can, while also understanding how to balance both live and synthetic training, Yates said during a panel discussion at the National Training and Simulation Association's annual Interservice/Industry Training, Simulation, and Education Conference.

The Air Force has located two external fuel tanks that reportedly fell from an F-16 fighter onto a coastal town in northeastern Japan, according to a statement from Misawa Air Base. The pilot jettisoned the tanks from the Fighting Falcon during an in-flight emergency before landing at Aomori Airport around 6 p.m. Nov. 30, the 35th Fighter Wing at Misawa said. The wing said the tanks will be returned to Misawa. The plane landed without incident, but one of the tanks came down near homes and the town hall in Fukaura, roughly 100 miles west of the base.

France announced multibillion-euro deals on Dec. 3 to sell fighter planes and combat helicopters to the United Arab Emirates, aiming to boost military cooperation with its top ally in the Persian Gulf region amid their shared concerns about Iran. The UAE is buying 80 upgraded Rafale fighters in a deal the French Armed Forces Ministry said is worth $18 billion and represents the largest-ever French weapons contract for export. It also announced a deal with the UAE to sell 12 Airbus-built combat helicopters.

A dramatic mission conducted in the early hours of Oct. 31, 2020, saw members of the elite SEAL Team Six rescue American citizen Philip Walton, who was kidnapped in the northwest African country of Niger and then taken to neighboring Nigeria. News of Walton’s safe extraction threw the spotlight directly upon U.S. Special Operations Command as reports revealed the daring mission brought together a raft of air assets, including CV-22B Ospreys and MC-130J Commando IIs as well as KC-135R tankers to support their long-range mission.

You may not know the International Telecommunication Union or the 3rd Generation Partnership Project, but they and similar bodies set security standards for the internet of today and tomorrow. Experts say Beijing has been stacking the boards of such groups to benefit China and undermine the rest of the world’s data privacy and information security.

Here are 10 power players in private space exploration who are revolutionizing the industry—who aren’t Elon Musk.

A holiday tradition in Alaska’s largest city for more than 60 years got off to a dim start this year. A 300-foot-wide, brightly illuminated star situated high above Anchorage in the Chugach Mountains is traditionally lit the day after Thanksgiving. However, when military crews arrived to light the star, only about half of the 350-or-so bulbs worked. Airmen worked for three days in extreme conditions and cold temperatures before finding the cause of the problem.