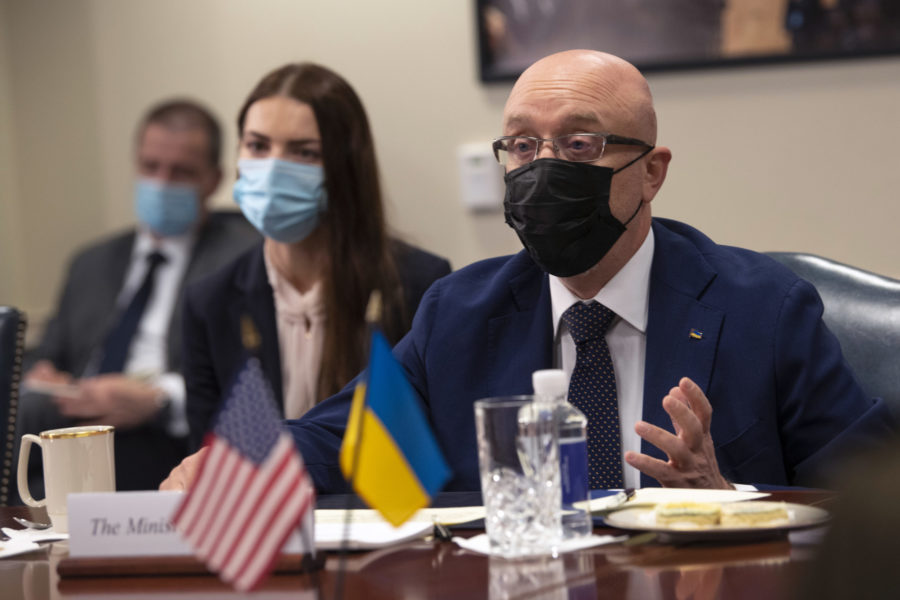 A Defense Department team is on the ground in Ukraine assessing what the country needs to protect itself from air, naval, electronic, and cyber warfare threats as Russian troops gather on multiple fronts, a senior Ukrainian defense official told Air Force Magazine, describing an emphasis on what assistance can be delivered “today.”

Ukraine has been engaged in a low-intensity conflict with Russian-backed separatists in the eastern Donbass region since 2014, when Russia invaded and annexed the Crimean peninsula. Presently, an estimated 40 Russian battalion tactical groups and more than 115,000 personnel surround Ukraine after a second front was opened on the 600-mile northern border with Belarus following the joint Zapad exercises between Belarus and Russia in September.

“Russia doesn’t need only Donbass,” a senior Ukrainian defense official said on condition of anonymity. “If we are talking about Russian long-term goals, they want all Ukraine.”

The U.S. has sought to protect Eastern Europe’s largest democracy, a non-NATO partner, by stepping up defense assistance and calling on Russia to explain the buildup of more than 100,000 troops on Ukraine’s border. In terms of what defense assistance can be immediately provided by the United States, the Ukrainian official said: “This is a political question.”

During Ukrainian President Volodymyr Zelensky’s August visit to Washington, President Joe Biden announced an additional $60 million in anti-tank javelin missiles, which have in the past helped push Russian tanks farther from the frontline. The assistance is part of $400 million in assistance over the past year and some $2.5 billion since 2014. But the greatest Russian threat is now perceived to be from the air.

Speaking at the Dec. 2 Atlantic Council discussion “Will Russia Invade Ukraine Again?”, former U.S. ambassador to Ukraine John E. Herbst said he believed immediate defense assistance to Ukraine is possible and should be covertly transferred to the country.

U.S. European Command declined to reveal where Patriot missile batteries are located in the region and told Air Force Magazine that it supports “de-escalation in the region and a diplomatic resolution to the conflict in Eastern Ukraine.”

U.S. Transportation Command declined to discuss specific countries or operations but said it was conceivable to move a Patriot battery via air.

“We prefer to move a battery via surface,” TRANSCOM spokesperson Scott Ross told Air Force Magazine. “When we need to move a battery or any other kind of cargo or organization and it needs to be there quicker because of mission priorities, we will use military lift, or commercial lift, depending upon what course of action makes the most sense for that particular event.”

Ross, out of operational security, declined to describe the transportation aircraft that would be used to move a Patriot battery.

The Ukrainian official said the Ukrainian Ministry of Defense and DOD are talking about what defense assistance is possible. Any decision on immediate assistance would be up to the White House.

“We are in [the] process and the Pentagon is under consideration what can be supplied to Ukraine in [the] short term,” the official said.

The official confirmed a Defense Department working group is in Ukraine evaluating the country’s defense needs, and he described a November meeting between Ukrainian Minister of Defense Oleksii Reznikov and Defense Secretary Lloyd J. Austin III. He also said Reznikov received support from a bipartisan group of American lawmakers during his visit.

No matter what the largesse of Congress can provide, once the National Defense Authorization Act passes, defense purchases take time, and Ukraine’s needs are urgent.

“Something which we need tomorrow we cannot buy right now,” the Ukrainian official said. “In fact, we needed it yesterday, but if you want to buy it, it’s quite a long process to procure.”

Ukraine has medium-term plans for upgrading its air defense systems, but the urgent need to protect its borders from a possible Russian invasion has prompted a foreign military sales request and negotiations for immediate deterrence capabilities.

Congressional aides involved in Reznikov’s visit told Air Force Magazine that Stinger anti-aircraft weapons were recommended as a bridging solution. The Ukrainian defense official said that with a 13,000-foot altitude range, the system could help defend against a threat from attack helicopters.

“What about jets who are flying above?” the official posed. “So, this is very short range. To some extent, in trenches it’s good equipment.”

The Ukrainian Army currently maintains trench positions in the southeastern Donbass region, where it faces off against the Russian-backed breakaway republics of Donetsk and Luhansk.

“It depends what we are going to protect. If we want to protect a big city, we need kind of long range,” he said. “We need to assess every situation, and we are doing this with the U.S. side.”

The Ukrainian military official would not confirm the precise systems requested, such as long-range Patriot missile batteries or Stinger short-range air defenses, saying instead Ukraine has requested from the United States “capabilities.”

“We are talking about what type of capabilities we need, what we need urgently, and our defense team works with [the] American air defense team to find out decisions for short term, for longer term,” he said. “It doesn’t mean we don’t have them. But to deter aggression, we need to improve them.”

From a practical standpoint, it is air defenses and not aircraft that Ukraine needs most urgently.

Ukraine has Europe’s seventh-largest Air Force at approximately 144 platforms, but much of its fleet is aging Soviet-made aircraft. Ukraine combat aircraft include MiG-29s and Sukhoi Su-25s and Su-27s. Upgrading to American F-16 aircraft would require “five to 10 years,” the official said, using the example of Poland’s transition to a modern American Air Force.

NATO Secretary General Jens Stoltenberg, following a foreign ministers meeting in Riga, Latvia, on Dec. 2, voiced the political support of the alliance but said it was up to each NATO partner to negotiate defense assistance with Kyiv.

“Ministers made clear any future Russian aggression would come at a high price and have serious political and economic consequences for Russia,” Stoltenberg said in a press briefing, noting potential increased economic and financial sanctions as well as political restrictions.

The NATO Secretary General also pointed to the alliance’s reaction to the 2014 invasion of Crimea, which led to the deployment of battle groups in the Baltic region and Poland and an increased presence in the Black Sea, including air policing, rotational troops, and more exercises.

Stoltenberg did not promise military assistance.

“We provide support to Ukraine with capacity building. Allies provide training, equipment, and advice. And also share information with them,” he said.

Following a meeting with his South Korean counterpart Dec. 2, Austin described the danger Russia poses but declined to speculate on a potential U.S. response.

“Russia has a substantial amount of forces in the border region, and we remain concerned about that,” he said, adding that information warfare is being used by Russia to undermine Zelensky’s legitimacy.

The Ukrainian defense official said Ukraine has asked other NATO allies for defense assistance. In some cases, domestic law prohibits it. At the NATO defense ministerial level, Ukraine commission discussion has been blocked by Russian ally Viktor Orban, Prime Minister of Hungary, he added.

“It’s quite complicated with NATO. NATO doesn’t have itself weapons, its weapons of nations,” the official said. “We are working with all possible NATO nations, but some countries legally cannot sell us any weapons.”

Security analysts have theorized that Russian President Vladimir Putin needs a land bridge through the Donbass to the Crimean peninsula, which it currently spends billions of dollars to support and militarize.

The Ukrainian official said the Ukrainian port city of Mariupol on the Azov Sea stands in the way of such a tactical move, and it is well defended. Ukraine’s larger concern, rather, is Russian troops poised northeast of Kyiv and across the border in Belarus. Russian aggression may be the beginning of an escalation that ultimately seeks to make Ukraine part of Russia, as in Soviet times.

“We need to protect all our country,” the official said, noting concerns related to the new front to the north. “There is no chance we are not fighting. We are going to fight.”