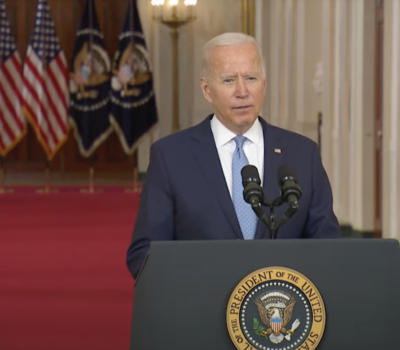 By Amy Hudson and Abraham Mahshie
President Joe Biden spoke to the American people Aug. 31, one day after the final military flight left Kabul, to say that some 200 Americans remained in Afghanistan but that the military mission had ended and “over-the-horizon” capabilities will now fight terrorism in the country. The President said the military will turn to great power competition with Russia and China and root out terrorists seeking safe havens elsewhere, such as the Middle East and Africa. "There's nothing China or Russia would rather have ... in this competition than for the United States to be bogged down another decade in Afghanistan," Biden said. "As we turn the page on the foreign policy that has guided our nation the last two decades, we've got to learn from our mistakes. To me, there are two that are paramount. First, we must set missions with clear, achievable goals, not ones we will never reach. And second, we must stay clearly focused on the fundamental national security interests of the United States of America." 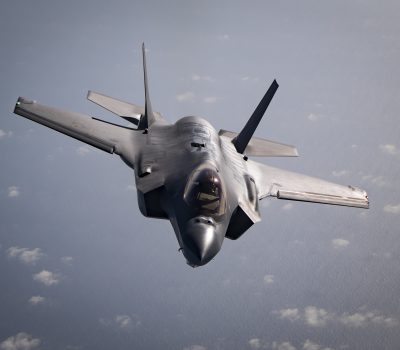 F-35 Not as Survivable as Previously Hoped, HASC Chair Says

By Greg Hadley
Upgrades in missile technology over the past several years have made the F-35 less survivable than previously hoped, the chairman of the House Armed Services Committee said Aug. 31 as he pushed for more investment in smaller, unmanned platforms. The Air Force plans to buy 1,763 of the stealthy F-35s, which would make it the service’s largest fleet. 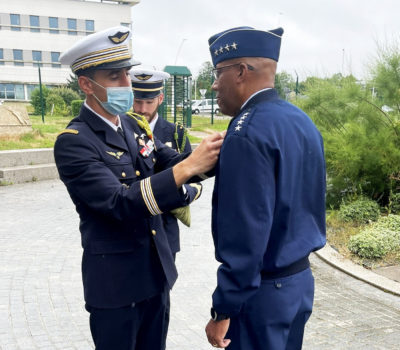 By Abraham Mahshie
The French Air and Space Force’s Fighter Squadron 2/4 Lafayette awarded Air Force Chief of Staff Gen. Charles Q. Brown Jr. its insignia pin, making him only the third American to receive the high honor. The Lafayette fighter squadron’s history dates to World War I, when it was known as the American Escadrille N124. At the time, it was manned with 38 American volunteers, mostly aviators, fighting under French command. 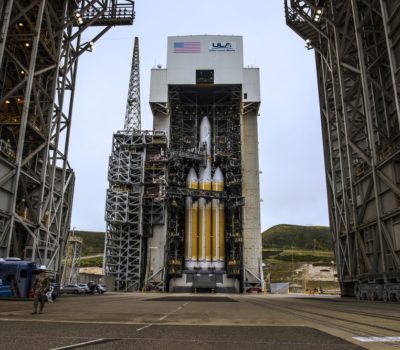 By Abraham Mahshie
The National Reconnaissance Office is further integrating with the Space Force and U.S. Space Command while also innovating faster to keep up with the threat posed by adversaries in space, NRO leaders said at Space Symposium in Colorado Springs, Colo. NRO Director Chris Scolese said the agency set an internal record in 2020 when it put 12 payloads into orbit on six launches. “What China and Russia have already shown is that space is now a race," Scolese said. "It’s a competition. It’s a fight. And if we’re not careful, it’s going to become a knock-down, drag-out brawl.”

The Pentagon’s top spokesperson said Aug. 31 the Biden administration was “obviously concerned” for the American citizens and Afghan allies still on the ground in Afghanistan following the completion of the U.S. military withdrawal from the country, acknowledging they were under a high level of threat from the Taliban and the regional Islamic State affiliate known as ISIS-K.

Afghan Interpreter Who Helped Rescue Biden in 2008 Left Behind After U.S. Exit

Thirteen years ago, Afghan interpreter Mohammed helped rescue then-Sen. Joe Biden and two other senators stranded in a remote Afghanistan valley after their helicopter was forced to land in a snowstorm. Now, Mohammed is asking President Biden to save him. “Hello Mr. President: Save me and my family,” Mohammed, who asked not to use his full name while in hiding, told The Wall Street Journal as the last Americans flew out of Kabul on Aug. 30. “Don’t forget me here.”

The Department of Defense’s principal director for 5G technology Joseph Evans has left his post at the Pentagon. He departs after two years in the position, during which time he oversaw the development of the DOD’s 5G strategy and implementation plan and established major public-private partnerships. Following Evans’ exit, Amanda Toman is understood to have taken up the role of acting principal director for 5G.

The arduous airlift demands of the Afghanistan evacuation mission haven’t changed the U.K. Royal Air Force’s plans to retire its C-130s by 2030, its top officer said Aug. 27. “This is the first large-scale operation that we’ve done with our A400s, and it’s demonstrated that this is an aircraft with real potential and enormous capacity,” said RAF Air Chief Marshal Mike Wigston in an interview with Defense News. “It flies much higher and much faster and carries a greater payload than the C-130. So as every month goes by, my confidence in that decision increases.”

No US Military Dogs Were Left Behind in Afghanistan, DOD Says

While animal rescue groups across the globe race to get dogs out of Afghanistan, Pentagon officials want to be very clear: The U.S. military did not leave any of its working dogs behind. Viral photos purporting to show dogs locked in cages at Hamid Karzai International Airport have raised the hackles of U.S. lawmakers and dog lovers alike. But the photos are not of military working dogs, as the American Humane Society and others have suggested.

The two images aren't separated that much in terms of where they were taken geographically, but they deviate greatly in terms of how far apart they were taken in time. They represent the operation that would send the first Americans into Afghanistan to kick off the war there, as well as the greater Global War on Terror as we now know it, and the last American Soldier to step foot on Afghan soil. The first image was taken Sept. 19, 2001, the other Aug. 30, 2021. They are now the alpha and the omega of America's war in Afghanistan, visually speaking.

ICBM Modernization and Sustainment: A Comprehensive Approach to Building GBSD

With the Air Force aiming to develop, deploy, and maintain the new Ground-Based Strategic Deterrent at a rapid pace starting in 2029 and lasting for decades, the need for a broad strategy encompassing cybersecurity, digital engineering, and other new technologies has never been greater, and that will require integrated support like never before.

Active-duty Soldiers Join Fight Against the Dixie Fire in California

Roughly 200 Soldiers from Joint Base Lewis-McChord, Wash., deployed Aug. 31 to northern California to help fight wildfires burning in the state, including the Dixie Fire, which has burned more than 1,200 structures but is less than half contained. Troops with the Army's 23rd Brigade Engineer Battalion and 2-3 Infantry Battalion, both from 1-2 Stryker Brigade Combat Team, were training Aug. 30 at JBLM before traveling to the Lassen and Plumas National Forests to support firefighting efforts there.

Israeli officials visiting Washington, D.C., last week were met with a request to tighten intelligence cooperation between the CIA and the Mossad in light of the US exit from Afghanistan, government sources tell Breaking Defense. The focus on the improved intelligence sharing—details of which sources would not divulge—comes amid renewed fears that the ISIS terrorist group will use Afghanistan as a hub for new attacks on both American and Israeli targets.

Reps. Doug Lamborn (R) and Jason Crow (D), both from Colorado, announced Aug. 30 they are introducing legislation to establish a Space National Guard as a Reserve component of the U.S. Space Force. Lamborn and Crow are members of the House Armed Services Committee and co-chairs of the House Space Force Caucus.

Nottingham resident Jim Taylor walked 22 miles along Seacoast New Hampshire beaches Aug. 28, carrying a 22-pound rucksack, to raise awareness about suicides among veterans. Jim, an Air Force veteran, was accompanied by his wife, Shannon, who rode along in a Jeep. He walked for Mission 22, a veteran-based group that began in Indiana. Mission 22 provides help for treatment for post-traumatic stress and traumatic brain injury as well as other issues veterans face.