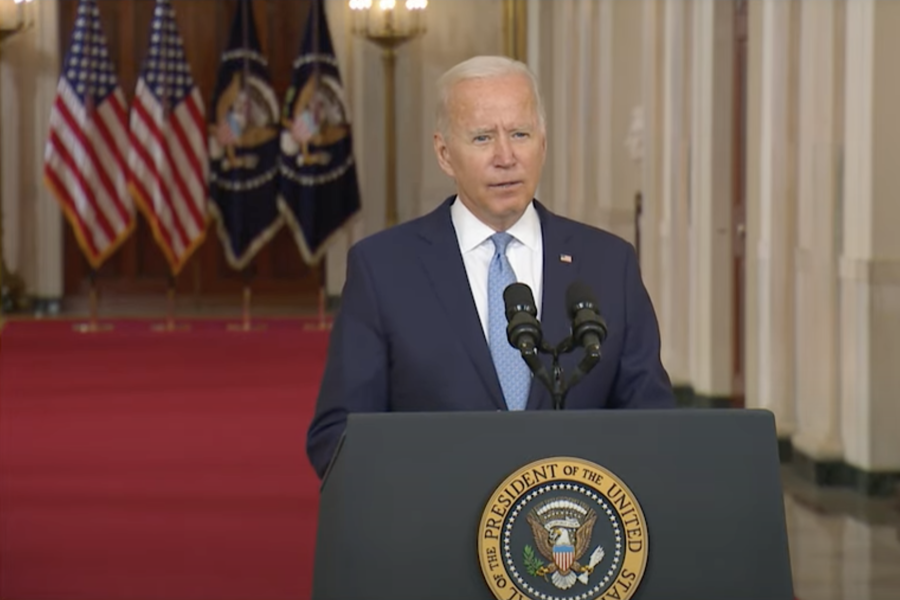 President Joe Biden spoke to the American people Aug. 31, one day after the final military flight left Kabul, to say that some 200 Americans remained in Afghanistan but that the military mission had ended and “over-the-horizon” capabilities will now fight terrorism in the country.

More than 100,000 Afghan and third-country civilians evacuated along with 5,500 Americans in 17 days of round-the-clock military flights, a “mission of mercy” Biden said was necessitated by President Donald Trump’s Feb. 29, 2020, agreement with the Taliban to vacate by May 1, 2021.

“Everything changed” by the time he took office, Biden said. “The Taliban onslaught was coming.”

Biden said he took “full responsibility” for the decision to pull out the final troops, even though that meant some 200 Americans were left behind. He said the U.S. government “reached out 19 times” since March, issuing warnings and offering to help them leave, but many were dual citizens and “longtime residents” of Afghanistan who initially “decided to stay because of their family roots” in the country.

“For those remaining Americans, there is no deadline. We remain committed to get them out if they want to come out,” Biden said, citing the diplomatic work ahead, albeit without an embassy in Kabul, to secure safe passage on commercial flights and via overland routes.

The President said the “assumption” that more than 300,000 trained and equipped Afghan Armed Forces would secure the country was wrong. He thanked the military, American diplomats, and intelligence personnel for the operation to evacuate more than 120,000 total personnel since July.

“We completed one of the biggest airlifts in history, with more than 120,000 people evacuated to safety. That number is more than double what most experts felt was possible,” Biden said. “No nation. No nation has ever done anything like it in all of history. Only the United States had the capacity and the will and the ability to do it, and we did it today. The extraordinary success of this mission was due to the incredible skill, bravery, and selfless courage of the United States military and our diplomats and intelligence professionals.

Biden quoted U.S. Central Command boss Marine Corps Gen. Kenneth F. McKenzie Jr., saying “this is the way the mission was designed,” parrying criticisms about the crowds frantically trying to reach the airport in the days leading up to the Aug. 31 deadline for withdrawal.

Biden blamed the chaotic evacuation on the Trump administration’s agreement with the Taliban, which he said did not require the Taliban to work with the Afghan government, but it did authorize “the release of 5,000 prisoners last year, including some of the Taliban’s top war commanders, among those who just took control of Afghanistan.”

“By the time I came to office, the Taliban was in its strongest military position since 2001, controlling or contesting nearly half of the country. The previous administration’s agreement said that if we stuck to the May 1 deadline that they had signed on to leave, the Taliban wouldn’t attack any American forces. But if we stayed, all bets were off,” Biden said. “So we were left with the simple decision: Either follow through on the commitment made by the last administration and leave Afghanistan, or say we weren’t leaving and commit another tens of thousands more troops going back to war. That was the choice—the real choice: between leaving or escalating. I was not going to extend this forever war. And I was not extending a forever exit.”

Biden’s address from the White House dining room came hours after he witnessed the dignified return at Dover Air Force Base, Del., of the remains of the 13 service members killed in an Aug. 26 Islamic State-Khorasan attack outside a gate leading into the Hamid Karzai International Airport in Kabul. He also honored the 2,461 total fallen Americans and more than 20,000 injured during the 20-year conflict.

The President said the military would turn to great power competition with Russia and China while continuing to root out terrorists seeking safe haven elsewhere, such as the Middle East and Africa.

“There’s nothing China or Russia would rather have … in this competition than for the United States to be bogged down another decade in Afghanistan,” Biden said. “As we turn the page on the foreign policy that has guided our nation the last two decades, we’ve got to learn from our mistakes. To me, there are two that are paramount. First, we must set missions with clear, achievable goals, not ones we will never reach. And second, we must stay clearly focused on the fundamental national security interests of the United States of America.”

In declaring the end of the war in Afghanistan, Biden said an era of rebuilding countries had also come to an end. He acknowledged that the Afghanistan mission to root out terrorists and to stop future attacks on the homeland “morphed” into a nation-building effort aimed at creating a “democratic, cohesive, and united Afghanistan,” something he said hadn’t been accomplished over many centuries.

However, the President also issued a strong warning to terrorists everywhere, saying the U.S. does not need boots on the ground to enact revenge.

However, Biden’s speech did little to assuage critics, who blasted the decision to leave Americans behind.

“President Biden’s words today were hollow. One American left behind is one too many. The fact is President Biden abandoned Americans in Afghanistan—leaving them at the mercy of the Taliban and ISIS-K,” said Rep. Mike Rogers (R-Ala.), lead Republican of the House Armed Services Committee, in a statement released following Biden’s address. “The President made a promise to the American people that he would stay until every American was out. Today, he shamefully tried to paint his failure as a success. This isn’t the end of a war—the terrorists still exist and they killed 13 American service members last week. They will not stop because the President arbitrarily picked a date.”