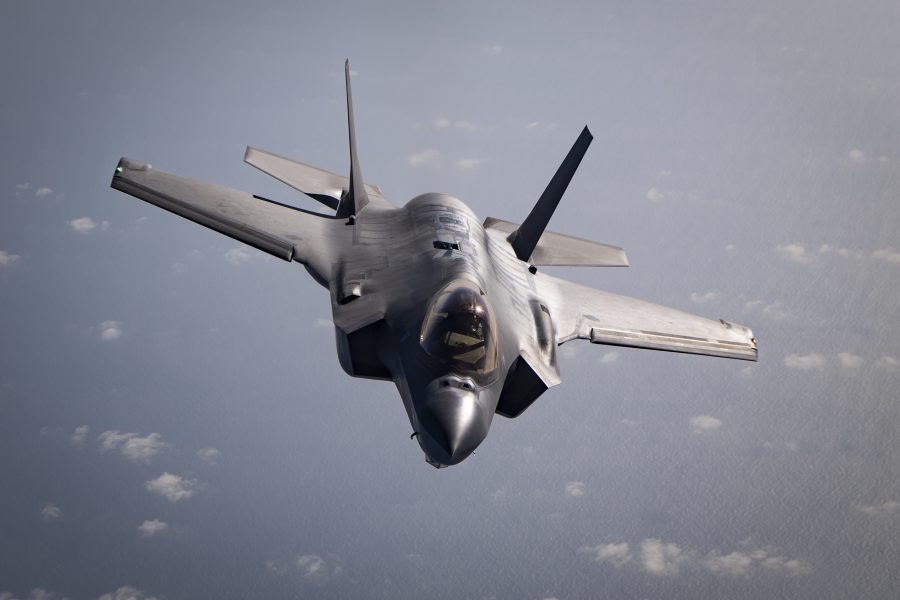 F-35 Not as Survivable as Previously Hoped, HASC Chair Says

Upgrades in missile technology over the past several years have made the F-35 less survivable than previously hoped, the chairman of the House Armed Services Committee said Aug. 31 as he pushed for more investment in smaller, unmanned platforms.

Speaking at a virtual event hosted by the Brookings Institution, Rep. Adam Smith (D.-Wash) was quick to note that the F-35 remains more survivable than other fighters “by quite a bit,” pointing to the F-16 for comparison.

“But it’s also got some environments that it’s not going to be able to get into because of how much missile technology has improved since we started building the thing,” Smith said.

Lockheed Martin, the maker of the stealthy fifth-generation fighter, claims the F-35 is the “most lethal, survivable, and connected fighter jet in the world.” The Air Force plans to buy 1,763 of the aircraft, which would make it the service’s largest fleet.

Smith, on the other hand, has made no secret of his displeasure with the F-35 program. In March, he referred to the fighter as a “rathole,” and in June, he slammed the program’s high sustainment costs.

Most of his criticism has focused on the issue of sustainment, where cost overruns have become a recurring theme for many in Congress. Smith reiterated that theme Aug. 31, pointing to a provision he included in the chairman’s markup of the 2022 National Defense Authorization Act released Aug. 30 that would limit the number of F-35As the Air Force could maintain starting in October 2026. As of May 7, 2021, the Air Force had about 283 F-35s in its fleet, and it requested to buy 48 more in its fiscal 2022 budget. The exact number of airframes the service would be able to maintain would be determined by how much sustainment costs in fiscal 2025 exceed the service’s stated goal of $4.1 million per tail per year.

The issue of survivability, however, presents a different challenge. In the past, the Air Force has said the F-35 has performed “very well in contested environments,” with the goal of progressing to “outstanding.”

At the same time, the service has also acknowledged that broad control of the air in a high-end conflict is no longer achievable, aiming instead for “temporary windows of superiority” in “highly-contested threat environments.”

In such highly contested threat environments, Smith said platforms such as the F-35 are simply too big to go completely undetected. Instead, he advocated for more investment in “smaller, more survivable platforms, in many cases unmanned platforms.”

In particular, Smith pointed to the concept of drone swarms as potentially taking on some of the missions originally envisioned for the F-35.

“We’ve seen this play out in some of the fighting that has happened in Syria and the Armenia-Azerbaijan conflict,” Smith said. “You’ve got this undetectable swarm of drones that can still pack a pretty powerful punch—you can’t see it coming, you’ve got a devil of a time shooting it down. That’s why we make investments in that. In many ways, that can accomplish a lot of missions that some of the bigger platforms can’t because they’re easier to see.”

The concept of drone swarms has been on the Air Force’s radar for several years now, with former acquisition boss Will Roper in 2019 calling it the future of warfare. At the same time, the service has also invested in platforms to defend against such swarms, including a high-powered microwave to wipe out wide swathes of drones at once.

In addition to his criticism of the F-35’s survivability, Smith also pushed for more competition in the program, particularly in relation to the engine. Pratt & Whitney’s F135 engine has been the source of lengthy repairs and delays, and both GE and Pratt are currently taking part in the Air Force’s Adaptive Engine Transition Program.

The AETP is primarily intended for future platforms such as the Next-Generation Air Dominance program (NGAD), but “these are engines that could potentially be used in the F-35 as well,” Smith said.

In his 2022 NDAA markup, Smith proposed directing the Pentagon’s acquisition boss to submit to Congress a “strategy for continued development, integration, and operational fielding of the Adaptive Engine Technology Program propulsion system into the U.S. Air Force fleet of F-35A aircraft beginning in fiscal year 2027.”