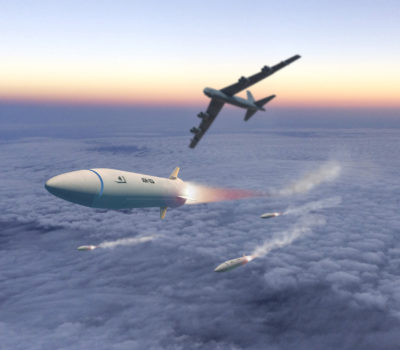 By Brian W. Everstine
The first booster flight test of the Air Force’s AGM-183A Air-launched Rapid Response Weapon failed April 5. In a release issued April 6, the service acknowledged the failure is a “setback” for hypersonic progress, but said the test still provided “valuable information” for the program’s development. During the test at Point Mugu Sea Range, a B-52H Stratofortress attempted to fire the first booster test vehicle for the program, but the test missile did not “complete its launch sequence” and stayed on the bomber, which then returned to Edwards Air Force Base, Calif. 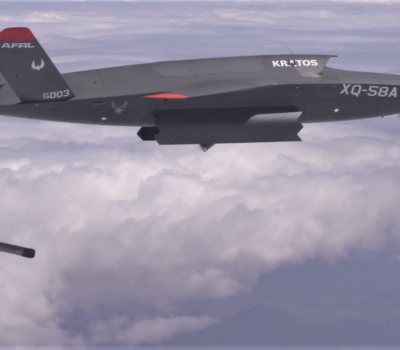 By Brian W. Everstine
The Air Force demonstrated the successful launch of a drone by a larger remotely piloted aircraft on March 26, with the XQ-58A Valkyrie releasing a small UAS from its own internal weapons bay. The flight test, the sixth for the Valkyrie, marked the first time the aircraft opened its payload bays. Valkyrie also flew both higher and faster than its previous tests, according to an Air Force release. 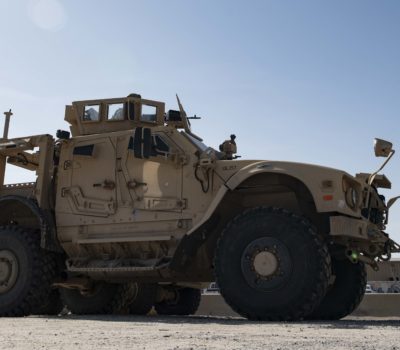 By Brian W. Everstine
Three Security Forces Airmen were not wearing seatbelts and were inexperienced in driving the Mine-Resistant Ambush Protected All Terrain Vehicle when it crashed Sept. 12, 2020, at Ali Al Salem Air Base, Kuwait, killing one. An Air Force Ground Investigation Board report, released April 5, outlined a culture of lackadaisical seatbelt use reported by some in the squadron, and a lack of oversight for training on the M-ATVs, which saw increased use just before the incident due to “local threats” at the base. The crash killed Senior Airman Jason Khai Phan, 26, of Anaheim, Calif. Phan was assigned to the 66th Security Forces Squadron at Hanscom Air Force Base, Mass., and was deployed to the 386th Expeditionary Security Forces Squadron. 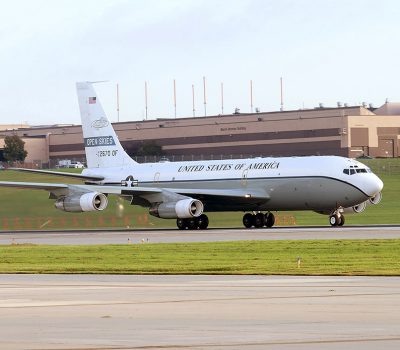 By Brian W. Everstine
The Air Force is sending its two OC-135B Open Skies aircraft to the boneyard after the U.S. withdrew from the treaty, even though it's not clear whether the new Biden administration will rejoin the monitoring agreement with Russia. Because there is no longer “a mission requirement for the OC-135B, the Department of the Air Force has moved to initiate standard equipment disposition actions in accordance with regulations,” an Air Force spokesperson said in a statement. 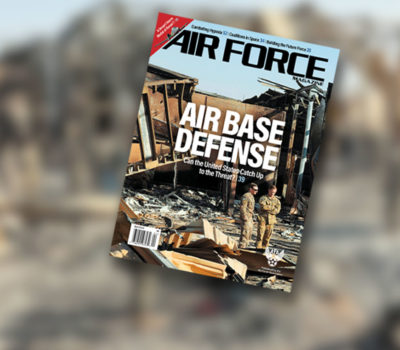 Read about forward base defense, U.S. progress on hypersonic weapons, building coalitions between spacefaring nations, the heroism of Capt. Stephen Phillis, a one-on-one interview with Air National Guard director Gen. Michael A. Loh, and more in the April issue of Air Force Magazine.

“You want each service to bring those long-range fires,” the Joint Chiefs’ vice chairman said.

Navy Medic Shoots 2 US Sailors; is Stopped, Killed on Base

A Navy medic shot and critically wounded two U.S. Navy sailors at a Maryland business park on April 6, then fled to a nearby Army base where he was shot and killed, police and U.S. Navy officials said. Fantahun Girma Woldesenbet, a petty officer third class assigned to Fort Detrick, began shooting with a rifle inside a Navy-related business at the Riverside Tech Park, causing people inside to flee, Frederick police and Fort Detrick officials said at a news conference.

This fall, the Army’s Project Convergence wargames will host the Air Force, Navy, Marines, and Special Operations in a transcontinental scenario—one meant to replicate the vast distances of the Western Pacific and the technological challenges of a great power war.

The number of deaths by suicide among military service members increased alarmingly in the fourth quarter of 2020, according to the Defense Department's latest quarterly report.

In episode 16 of the Mitchell Institute’s Aerospace Advantage podcast, Air Force Global Strike Command boss Gen. Timothy M. Ray, talks about how the ability to hit any target in the world at any time is a crucial military advantage enjoyed by the United States. It puts our adversaries on notice and it reassures our allies in times of peace and secures decisive results in war. Other services and our allies don’t have this capability, so it all comes down to U.S. Air Force bombers. Learn what it takes to sustain these incredibly complex operations, modernize the aircraft that make it possible, and innovate operational concepts that speak to tomorrow’s challenges through a conversation with the Air Force’s top leader in charge of this key mission.

The Defense Department began pivoting to telework in March 2020, and by July, top officials were touting the massive effort as successful in “shattering the myth” that remote work was impossible for DOD.

The US Air Force Life Cycle Management Center (AFLCMC) has announced that the Mobility and Training Aircraft Directorate has awarded an alternate modification installation (AMI) contract for the installation of ‘avionic modifications’ on the C-5 Galaxy fleet of aircraft.

The Space Force is in the "throes" of standing up a new National Space Intelligence Center and plans to reach initial operational capability in January 2022.

Numerica, a company that operates a network of ground-based telescopes to track objects in deep space, is deploying new sensors that can observe orbiting satellites in broad daylight.

Taiwan’s Defence Ministry on April 5 reported a new incursion by China’s air force into the island’s air defense identification zone, made up of eight fighter jets and two other aircraft, one of which flew through the strategic Bashi Channel.

Japan may base F-35B Lightning II stealth fighters in the southern part of the country where they could defend remote islands that are claimed by China, according to local media.

Lockheed Martin on April 5 appointed a new leader for the F-35 program who has experience in overseeing the jet’s sustainment enterprise, amid public criticism over the Joint Strike Fighter’s operations and maintenance costs.

Air Force JTACs trained Syrian fighters during a live-fire exercise with attack helicopters last month, catching the attention of online forums and highlighting a little-known part of the fight against the Islamic State group that may foreshadow the future of air support in proxy wars.

Serving in the U.S. military can be stressful, and new research suggests the effect of that is showing up in a dramatic increase in two types of sleep problems.

“I can’t remember when I haven’t had an ambition to be a ballplayer,” Pete Gray told Yank, The Army Weekly in 1945. “Being a big-leaguer is just something I dreamed of.”