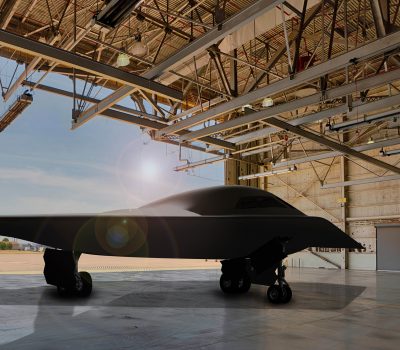 Dyess or Ellsworth to Get First B-21s

By John A. Tirpak
Either Dyess Air Force Base, Texas, or Ellsworth Air Force Base, S.D., will be the first base to host the B-21 Raider bomber. The service announced the start of environmental impact analyses in both locations to see which will be first to operate the Raider. Only after the first base is selected will USAF choose a second and third main operating base for the bomber. 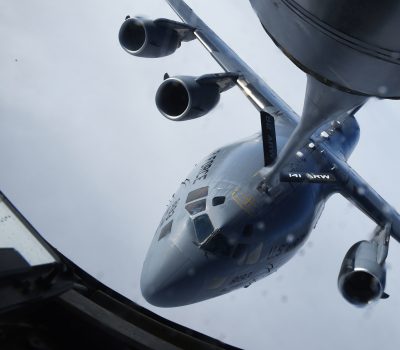 Mobility’s Role in the JADC2 Movement

By Brian W. Everstine
Air Mobility Command's gray tail airlifters and tankers will participate in a series of Joint All-Domain Command and Control experiments this year. The efforts, part of the series of Advanced Battle Management System experiments and other exercises, aim to show how aircraft such as C-17s and KC-135s can serve an integral role in the modern world of command and control, from space to the ground, when using new technology and data links, AMC boss Gen. Maryanne Miller said in an interview with Air Force Magazine. 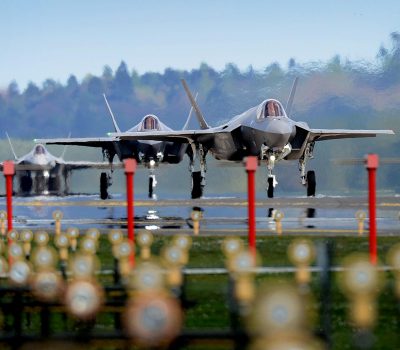 By Brian W. Everstine
U.S. Air Forces in Europe leadership is meeting regularly with NATO Air Chiefs and the F-35 users' group to plan out new range infrastructure and training opportunities as American F-35s prepare to deploy to the continent. The planning, led by USAFE’s Warrior Preparation Center, is looking to combine the lessons learned by current F-35 operators, such as the United Kingdom, Norway, the Netherlands, and Italy, with the U.S. expertise on the airframe to lay out the best way to train with the new aircraft in a continent with limited range access. “The intent is to approach it from an operational training infrastructure perspective, and work with our partners,” USAFE boss Gen. Jeffrey Harrigian told Air Force Magazine in an interview. 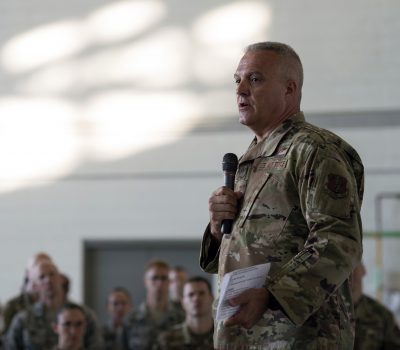 By Jennifer-Leigh Oprihory
The National Guard Bureau is preparing to roll out SPRINGboard, a digital tool that'll give leaders insight into the health risk factors impacting the communities their troops call home so they can tailor prevention efforts accordingly. During a March 5 media roundtable at the Pentagon, Capt. Matthew Kleiman, who serves as NGB’s director of psychological health and directs the Warrior Resilience & Fitness Division, described SPRINGboard as “a predictive model” powered by "machine learning and advanced analytics.” He said the dashboard will synthesize population-level health-risk-factor data and internal data from the bureau to understand geographic-specific risk factors, eventually down to the county level. 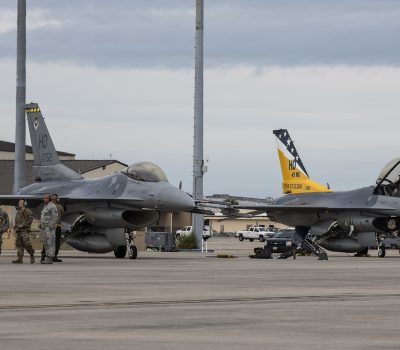 By Rachel S. Cohen
Things are starting to look up at Tyndall Air Force Base, Fla. It’s been 17 months since Category 5 Hurricane Michael flattened the Florida Panhandle installation that is home to F-22s and about 4,000 people. Restoring the base to a new-and-improved condition over the next several years is slated to cost up to $4.9 billion, all of which Congress has already appropriated for the Air Force to use. Meanwhile, Tyndall Airmen are accomplishing 90 percent of the missions they were doing before the storm, with 80 percent of the people and 50 percent of the facilities that were originally there. That reality will persist for the next three to five years as the base is gradually rebuilt and reorganized to begin hosting 72 F-35s by the fall of 2023. MQ-9s could follow around the same time.

U.S. Space Force leaders were asked by lawmakers this week to explain why they have taken no action to establish a Space National Guard as a reserve component of the newest branch of the armed forces. Their answer, in so many words, is that they’re just following the law.

Defense Secretary Mark Esper has tasked the Army with developing a rapid-response capability concept for counter unmanned aerial systems, a service official said March 5. The service will deliver the concept in April after it completes an assessment of several fielded c-UAS systems. The Army in January was named the new lead for the effort.

New Special Operations Network Will Serve as Security Backbone in Afghanistan Ahead of U.S. Withdrawal

A new network of Special Operations forces will serve as the backbone of a smaller U.S. military mission in Afghanistan, hunting Islamic State group fighters as the United States withdraws and providing firepower against the Taliban if a peace agreement with the group crumbles, military officials said.

Air Force Special Operations Command must better integrate cyber, space, and information operations as the U.S. military pivots to All Domain Operations from a focus on combatting terrorism, according to a new AFSOC strategy document. “It will induce short-term institutional turbulence, require us to question long-held assumptions, and compel us to make the difficult choices necessary to our transformation,” Lt. Gen. Jim Slife said in a memo to all of AFSOC.

The United States and the United Kingdom have agreed to “further” reduce Huawei’s presence in telecom infrastructure, U.S. Defense Secretary Mark Esper said at a March 5 Pentagon press conference. Esper described a lunch conversation with U.K. Secretary of State for Defense Ben Wallace on the subject as “candid,” without elaborating on what form the “further’ reduction would take. He highlighted the importance of the intelligence-sharing agreement between the U.S., the U.K., and other Five Eyes partners.

The Defense Department has made significant progress improving management of the information technology used for its business processes but work on key areas remains, according to the latest roundup report from the Government Accountability Office.

A South Korean woman who works at Camp Humphreys has tested positive for COVID-19, officials said March 6, in the first confirmed case linked to the U.S. military outside the hard-hit area of Daegu. The announcement raised to seven the number of people affiliated with U.S. Forces Korea who have been infected, including a soldier and his wife.

This $15 3D-Printed Tool Will Save the Air Force Millions

The U.S. Air Force will save millions of dollars and Airmen spared the dirty work of crawling inside fuel tanks, all by using a simple tool invented by a serving Airman. The pressurized leak detection cup will cut the the number of hours needed to detect fuel tank leaks by up to 75 percent, saving the service more than a million dollars a year. To top it off, the new tool is 3D printed and costs just $15 to produce.

The first 16 F-15E Strike Eagle jets belonging to the 494th Fighter Squadron returned to RAF Lakenheath on Mar. 1-2, from a deployment to U.S. Central Command. Interestingly, 14 out of 16 F-15Es returned to the U.K. sporting some interesting nose arts inspired by famous wrestlers (the two aircraft that were not sporting the nose art belong to the 492nd FS and were washed out according to our sources).