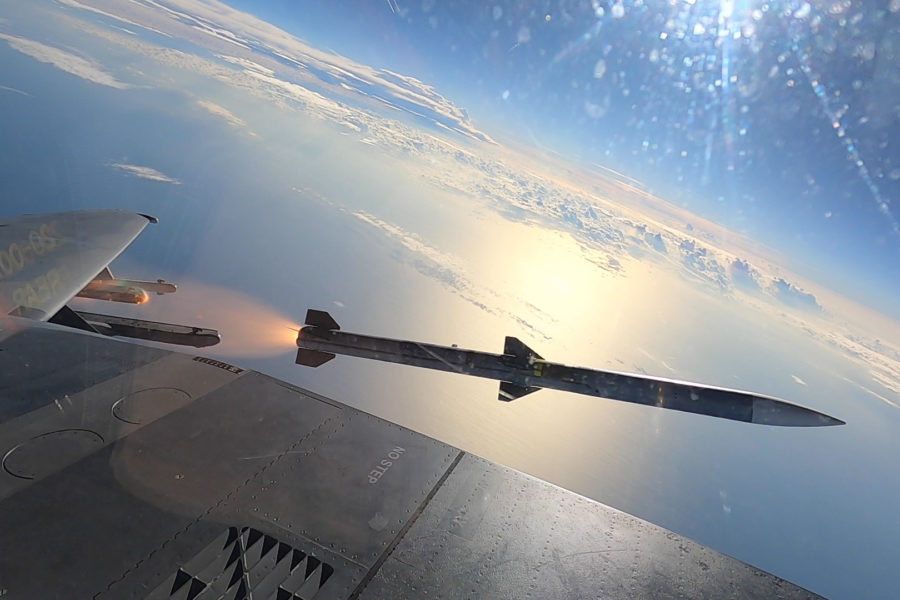 The new F-15EX’s ability to carry and launch more air-to-air missiles than the F-15C was proved in a pair of late November tests at Eglin Air Force Base, Fla., the service said Jan. 5.

The outboard missile stations are new to the F-15EX and give the fighter the ability to carry and launch 12 air-to-air missiles at once. The F-15C was limited to eight such missiles; four on conformal fuselage stations and four on underwing stations. The two new stations add another four underwing missiles; two each on two pylons.

“Once initial testing is complete, operational units receiving the new F-15EX will be able to carry and employ a full loadout of 12 missiles on the aircraft, upon fielding,” the test wing said.

Boeing, maker of the F-15EX, has previously advertised that the fighter can carry 22 air-to-air weapons, but the Air Force’s armament center wasn’t immediately able to say whether that full capability is being acquired by the service or is an option for future upgrades. Boeing did not respond to queries.

The additional weapons are enabled both by the additional stations but also by increased processor power and thrust on the F-15EX.

“This mission provided the first test points for validating the expanded carriage and employment capabilities of the Eagle II,” according to the release.

Eglin described the missiles as having been successfully “released … on separate passes against a target drone,” but was not able to say what the target was or whether it was struck by the missiles. Eglin employs a variety of targets ranging from QF-16s to dedicated, reusable target drones.

The 96th Test Wing said the tests mark “another milestone in the F-15EX’s developmental test program, but also incorporated many operational test objectives during the mission.” These were not described. The F-15EX fired its first missile nine months ago.

The F-15EX is being tested in a novel way, taking advantage of its similarity to the aircraft it replaces. The test aircraft are being used for simultaneous developmental and operational testing and have already deployed to several exercises to confirm the performance of new systems and capabilities.

In addition to its capacity to carry more weapons, the F-15EX has a fly-by-wire flight control system, an advanced, very powerful processor, an active electronically-scanned array radar, and the Eagle Passive Active Warning Survivability System (EPAWSS), which is a new self-defense electronic warfare suite.

“The integrated test strategy has been critical to our test success, allowing us to break the mold of traditional testing, ultimately resulting in a better overall product for the warfighter in a shorter timeline than a traditional approach, said Col. Colton Myers, combined test force F-15EX operational flight program test project manager.