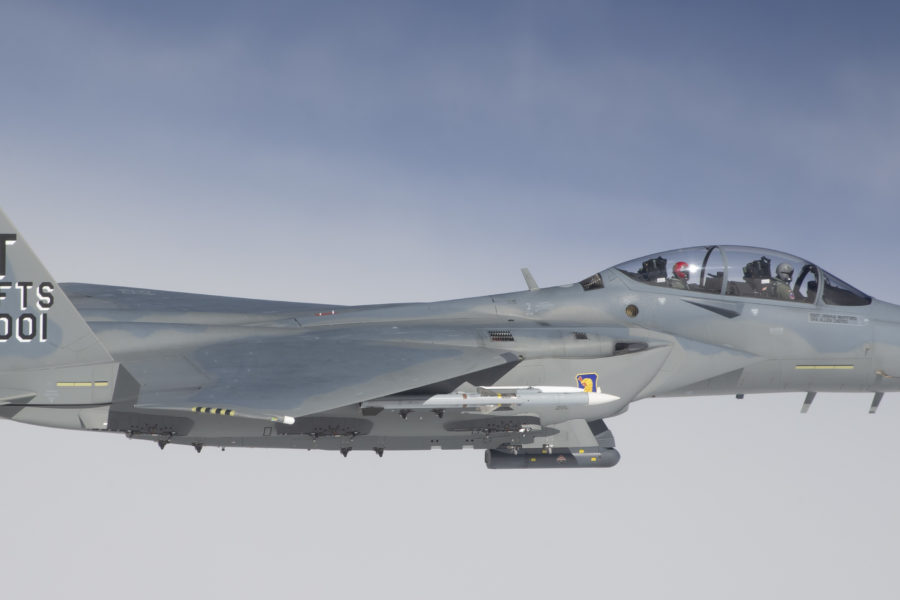 The F-15EX successfully fired its first weapon on Jan. 25, launching an AIM-120D missile at a BQM-167 unmanned aerial target over the Gulf of Mexico, the Air Force announced.

The F-15EX “detected the drone using onboard sensors, acquired a weapons-quality track, and launched the missile at the target” as part of the test, the Air Force announced in a release. The shot was then determined to be a success.

“This was an end-to-end verification of the entire weapons system, which will pave the way for more complex missile shots in the future,” Colton Myers, F-15EX test project manager with the Operational Flight Program Combined Test Force, said in a statement.

The missile fire marks a major milestone for the F-15EX, which first arrived at Eglin Air Force Base, Fla., for combined developmental and operational tests in March 2021.

Soon after, the new fighter participated in Northern Edge 21, a wargame in Alaska. The Eagle II posted a mixed record at the exercise, “shooting down” some adversaries but also getting shot down itself.

After Northern Edge, the fighter underwent “developmental flight and ground testing” that revealed several issues with its Suite 9 software system that were resolved. It deployed in October to Nellis Air Force Base, Nev., for a week’s worth of operational tests.

Combining developmental and operational testing “has been critical to our test success, allowing us to break the mold of ‘traditional’ testing, while ultimately resulting in an overall better product for the warfighter, and in a shorter timeline than if we adopted the traditional approach,” Myers said in a statement.

The fiscal 2021 National Defense Authorization Act included 12 F-15EXs, and the 2022 NDAA authorized 17 more after the Pentagon asked for a dozen in its budget request. However, Congress has yet to pass an appropriations bill to actually increase funding for fiscal 2022.