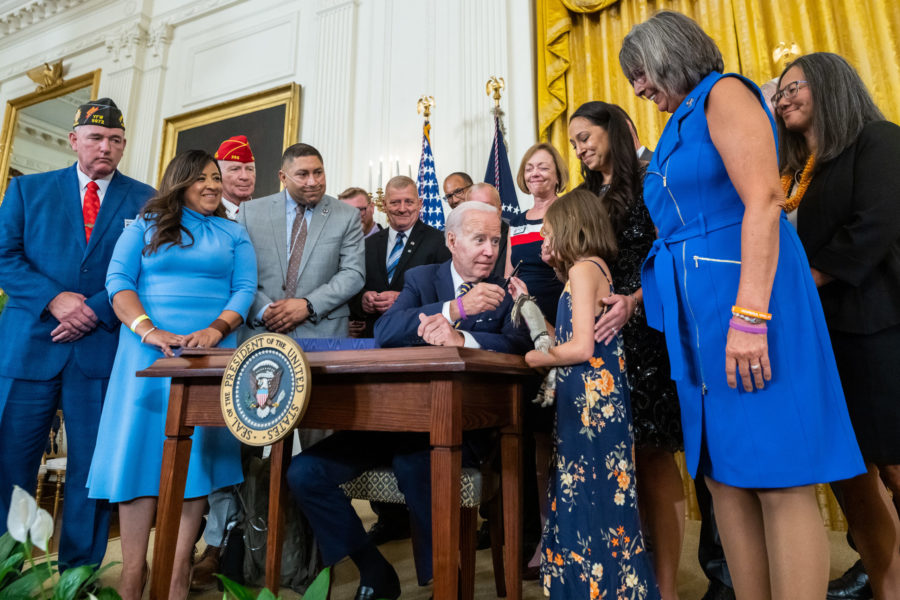 Biden Signs PACT Act to Expand VA Coverage for Toxic Exposure, but Some Are Left Out

For two decades, veterans of the Global War on Terrorism returned home and ended their service with headaches, difficulty breathing, and gastrointestinal problems related to toxic chemical exposure in the line of duty. Unable to prove their ailments were service related, the Department of Veterans Affairs often denied them coverage.

Thousands of veterans developed rare brain and lung cancers years after service and died, including President Joe Biden’s own son, Beau Biden, who was exposed to toxic fumes from a burn pit in Iraq during service in the Delaware Army National Guard.

After years of wrangling in Congress and more than a dozen failed bills, Biden signed a bill marking the largest expansion of VA health care in 30 years Aug. 10, adding more than 5 million eligible veterans but leaving some waiting up to 10 years for phase-in periods or without coverage for chronic conditions.

“Veterans of the wars of Iraq and Afghanistan did not only face dangers in battle, they were breathing toxic smoke from burn pits,” Biden said before signing the PACT Act into law.

“You could actually see some of it in the air—burn pits the size of football fields, incinerated waste of war such as tires, poisonous chemicals, jet fuel,” Biden said. “A lot of places where our Soldiers were sleeping were literally a quarter mile, half mile away from it. And where they ate their chow. I mean, it was there all the time.”

The Sergeant First Class Heath Robinson Honoring Our Promise to Address Comprehensive Toxics (PACT) Act expands eligibility for care to veterans of the Gulf War, to post-9/11 veterans, and to Vietnam veterans exposed to the toxic herbicide Agent Orange.

Post-9/11 veterans will be able to apply for VA care up to 10 years after their service ended. Survivors are eligible for monthly stipends and help with health care, life and home loan insurance, and tuition.

The wife and daughter of deceased Sgt. 1st Class Robinson, Danielle and Brielle Robinson, were on hand for the signing. Brielle, clutching a stuffed animal, stood beside the President as he sat at a desk to sign the PACT Act into law. Biden turned and spoke to her several times before handing her the pen he used to ink the legislation.

VA Secretary Denis McDonough said the law would immediately empower the department to serve many of the millions of claims that have been denied in recent years.

“We encourage anyone who might be eligible for PACT Act benefits to apply right away,” McDonough said, citing the informational website va.gov/pact. “We’ll stop at nothing to make sure every veteran, every family member, and every survivor gets everything they’ve earned, and they deserve.”

“It’s a 70 percent solution,” said Jackson, who served at Karshi-Khanabad (K2) Air Base, a secret Uzbek staging base for the invasion of Afghanistan where he was exposed to toxins. On a separate tour, Jackson was later exposed to burn pit smoke in Iraq, and he now has chronic illnesses.

Jackson, who worked for years with congressional staffs on both sides of the aisle, said the bill signed into law by Biden draws on some 15 separate pieces of legislation that have been advocated for by senators including Jerry Moran (R-Kan.), Jon Tester (D-Mont.), John Boozman (R-Ark.), Kirsten Gillibrand (D-N.Y.), and representatives such as Mark Takano (D-Calif.) and Stephen Lynch (D-Mass.).

“They took every conceivable type of toxic exposure and [gave] at least lip service to a lot of it,” he said.

Post-9/11 exposure sites on the list now include Afghanistan, Djibouti, Egypt, Jordan, Lebanon, Syria, Uzbekistan, Yemen, and the airspace above all those locations.

Radiation exposure will now be treated for service members who responded beginning Jan. 17, 1966, and ending March 31, 1967, to the collision of a B–52 bomber and refueling plane that released four thermonuclear weapons in the vicinity of Palomares, Spain. Similarly, those who responded between January 21, 1968, and September 25, 1968, to an onboard fire and crash of a B-52 that caused the release of four thermonuclear weapons near Thule Air Base, Greenland, will have a presumption of coverage. Many more toxic exposure sites are in the new legislation.

Jackson said there are no provisions for surviving family members, birth defects, and many chronic diseases beyond a set list of respiratory disorders.

He added, however, that the bill will mandate that the Department of Defense and VA conduct additional epidemiological studies that could be used in the future to add presumptive diseases to the list.

Stripping out some of the areas of coverage, while delaying eligibility for others, are some of the ways the bill won over budget-conscious Republicans, 41 of whom changed their votes and struck down an earlier version of the bill July 27.

“One of the compromises they came up with was everybody’s not eligible all at the same time,” he added. The number of presumptive illnesses was also limited. “They picked what they felt were either the most profoundly devastating or the most common that could be reasonably affiliated with the burn pits.”

The “phase-in” protocol limits which veterans will have access to VA health care over the next 10 years, making them eligible in two-year increments based on their discharge dates, locations, and toxic exposure risk activity.

“It means that there’s more delay. It means that help is coming, and you can mark your calendar, but you’re not necessarily going to be eligible the day President Biden signs the bill,” he said. “If you’re someone that is not ill yet, or perhaps who becomes ill at some point before your phase-in period, there’s going to be a profound effect because that care won’t be available to you when you need it.”

Jackson said even those veterans who remain outside of the coverage or whose chronic condition are not covered are eligible for toxic exposure screenings to know what ailments they may have. The VA and veterans organizations will be guiding veterans on how they can apply for the coverage.

“One of the larger victories in this is the explicit admission by the government that, yes, these places were toxic, they were dangerous, and they made people sick,” said Jackson. “The bullet moving through a lot of these bodies is disease from the toxic exposure.”