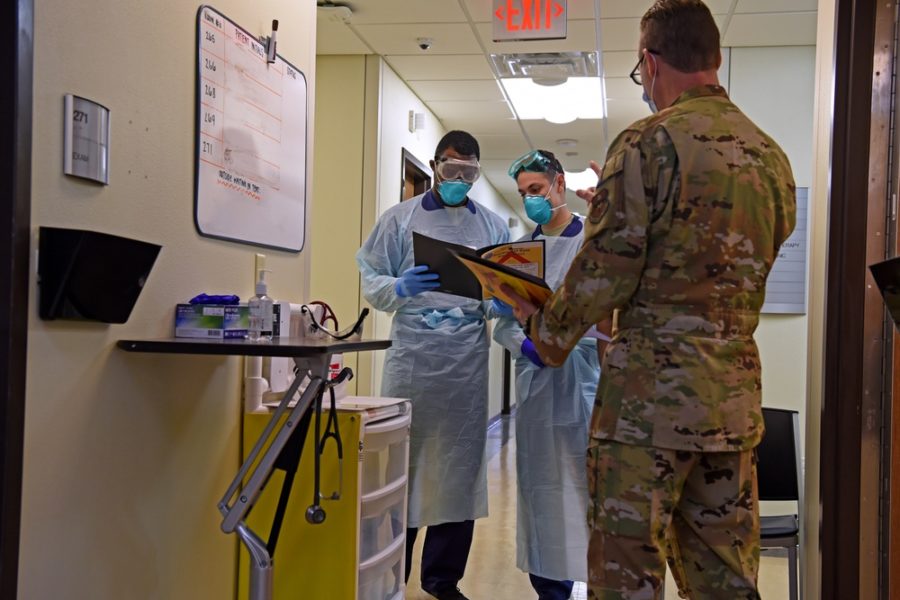 Biden’s announcement, previewed in a White House fact sheet ahead of a Dec. 21 speech, indicated that the service members put on standby to deploy will be “military doctors, nurses, paramedics, and other medical personnel” but did not specify from which branches or units they would come.

“We’ve already started moving military medical teams. They’ve already landed in Wisconsin and Indiana this week,” Biden said in his speech. “This is on top of 300 federal medical personnel that are on the ground, having deployed since we learned about Omicron.”

The military’s involvement in the federal government’s public-facing response to the COVID-19 pandemic has been somewhat limited since June, when the last federally supported vaccine center staffed by U.S. military personnel closed. Prior to that, service members at 48 sites nationwide administered about 5 million COVID-19 vaccine doses, the Pentagon said, with National Guard sites administering another 12 million.

Over the past several months, much of the Pentagon’s COVID-19 efforts have centered on its own vaccine mandate, with more than 1.5 million troops getting fully vaccinated. The Air Force, Space Force, Navy, Army, and Marine Corps all instituted deadlines for Active-duty troops that have now passed, and several services have already booted service members for refusing the vaccine and disobeying a lawful order.

Meanwhile, medical professionals have warned that the omicron variant could drive a surge in hospitalizations, and Biden’s action Dec. 21 is aimed at preventing hospitals from being overwhelmed by new patients.

Mirroring nationwide trends, the Department of the Air Force has also seen an uptick in COVID-19 cases as of late. The most recent data, released Dec. 21, showed 587 new cases in the prior seven days among military personnel, the department’s biggest jump in new cases since mid-September.

The Air Force’s most recent data did show a slight downward trend in the number of Airmen and Guardians who are unvaccinated, going from 22,065 who have either refused the vaccine, obtained a medical or administrative exemption, or are seeking an exemption to 21,587.

The number of pending requests for religious exemption, however, continues to stay above 10,000. Air Force policy calls for the service to rule on religious exemption requests from Airmen and Guardians inside the continental U.S. within 30 business days, but that policy was written before the pandemic, when the Air Force received just a “handful” of requests every year, Air Force spokesperson Rose Riley told Air Force Magazine.

Now, with thousands of personnel requesting them, there is a backlog. When the Nov. 2 deadline passed for Active-duty Airmen and Guardians to get the vaccine, 4,933 were recorded as seeking religious exemptions. Seven weeks later, that number had dropped only to 4,652; and about 6,000 requests from the Guard and Reserve components had joined the pile.

As of Dec. 21, the Department of the Air Force did not have servicewide data on how many religious accommodation requests had been denied or withdrawn since the Nov. 2 deadline; nor how many, if any, new ones had been made. The department did not have an estimate for how long it might take to sort through every request, Riley said.

Not a single religious accommodation had been granted by the DAF as of Dec. 21, and the department would not speculate on whether that would ever change, Riley said, adding that it continues to evaluate every request on its own merits.