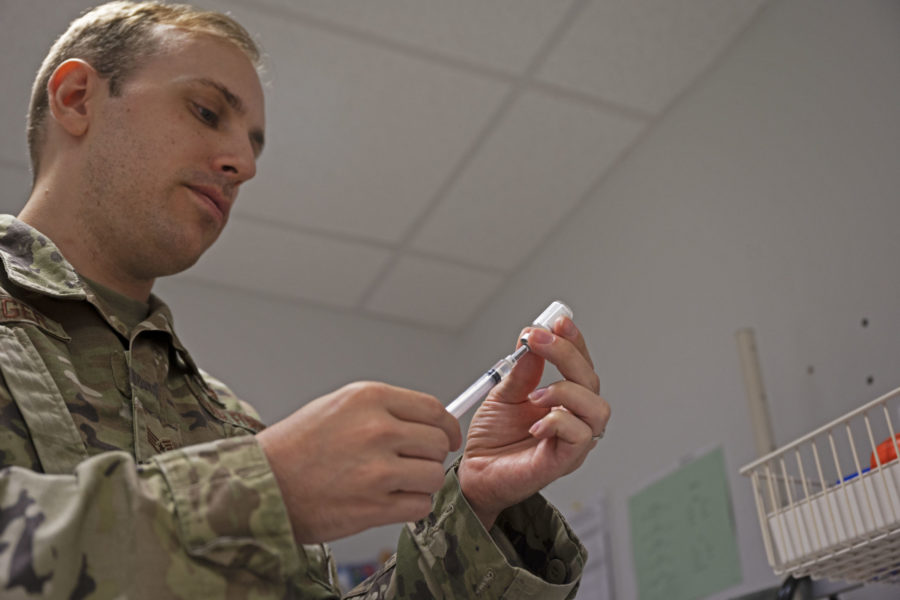 The Pentagon has a new tool in its push to fully vaccinate service members against COVID-19—a vaccine that medical officials hope will alleviate the concerns of those who have previously refused the shot.

The Novavax vaccine is now widely available for service members, the Department of Defense announced Aug. 29, and any locations that don’t have that particular shot can have it delivered within a few days.

Officials noted that the same technology is already used in other vaccines such as those for hepatitis B, HPV, and shingles, including some that have been required by the military.

“The Novavax COVID-19 vaccine uses technology that has been around since the 1980s. Not only do we have effectiveness and safety data from the Novavax clinical trials, but we also have decades of experience with this type of vaccine,” Lt. Col. David Sayers, chief of preventive medicine for the Air Force Medical Readiness Agency, said in a statement.

There are still tens of thousands of Airmen, Guardians, Soldiers, Sailors, and Marines who remain unvaccinated against COVID-19 a year after Defense Secretary Lloyd J. Austin III first announced plans to make vaccination mandatory. For the Air Force and Space Force in particular, the most recent numbers indicate that 2.6 percent of the 497,000 or so Airmen and Guardians in the total force are unvaccinated—more than 12,000 individuals.

Service members who have refused the vaccine have cited a variety of reasons. Some have religious objections to vaccines such as Johnson & Johnson’s that were developed using cell lines from aborted fetuses, while others have expressed discomfort with the first-of-its-kind mRNA technology used to create Pfizer’s and Moderna’s shots.

Medical officials hope the Novavax vaccine, which received emergency use authorization from the Food and Drug Administration on July 13, will resolve those concerns. It is a protein subunit vaccine and contains no mRNA or DNA technology, noted USAF Col. Tonya Rans, chief of the Immunization Healthcare Division at the Defense Health Agency.

However, there is skepticism that the Novavax shot will convince unvaccinated individuals to take the leap. A June survey of the general public from Morning Consult found the vast majority of those who were unvaccinated said they wouldn’t get it, and more than a month after the vaccine was approved for emergency use by the FDA, data from the Centers for Disease Control and Prevention indicates that fewer than 15,000 of the shots had been administered despite more than 625,000 already being delivered.

Meanwhile, Airmen and other service members have filed a number of lawsuits against the Pentagon’s vaccine mandates, and in July, a federal judge granted a wide-ranging preliminary injunction that temporarily prevents the Air Force from punishing or separating any Airmen who refuse the vaccine.