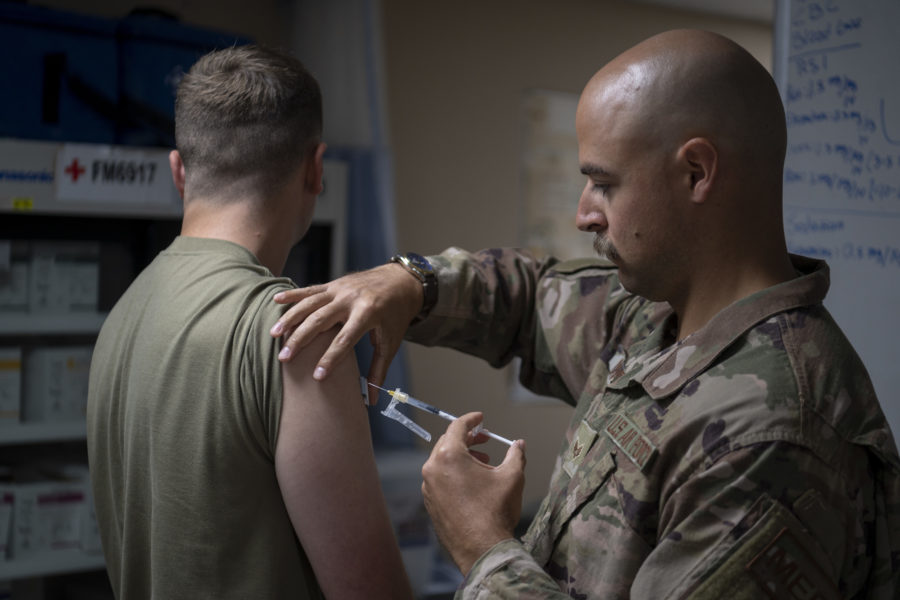 Thousands of Airmen and Guardians who remain unvaccinated against COVID-19 no longer have to get the shots—and those who faced disciplinary action for failing to get vaccinated will have their records wiped clean.

Defense Secretary Lloyd J. Austin III formally rescinded the Pentagon’s vaccination requirement Jan. 10, as required by the 2023 National Defense Authorization Act passed late last year. The change ends more than 16 months of angst since the policy was first announced in August 2021. Active-duty Airmen were given less than two months and reservists less than four to get the vaccines.

More than 95 percent of Airmen and Guardians met the deadlines, and according to the Department of the Air Force’s most recent data, 97.6 percent of the total force, or more than 478,000 members, are fully vaccinated.

Still, that leaves more than 11,000 Airmen and Guardians not fully vaccinated. While thousands of service members applied for medical, religious, or administrative accommodations to the requirement, only 1,069 members won approvals.

Under Austin’s orders, all waiver requests still pending will be dropped.

Vaccine refusers whose accommodation requests were denied were given five days to start the vaccination process, file an appeal, or request to separate or retire. For those whose appeals were denied, the five-day clock restarted. Ultimately, 834 were booted for refusing the vaccine, according to Air Force figures.

Exactly how many Airmen and Guardians received such punishments is unclear—Riley said the department does not track that data at a DAF level.

Any Airman or Guardian negative paperwork filed against those seeking special accommodations will now be removed. In his memo, Austin instructed the military departments to “update the records of such individuals to remove any adverse actions solely associated with denials of such [accommodation] requests, including letters of reprimand.”

The Air Force stopped imposing such punishments months ago. In July, a federal judge in Ohio blocked the DAF from taking disciplinary action against Airmen and Guardians seeking a religious accommodation, and a panel of judges upheld that ruling in November.

The Airmen and Guardians booted from service for refusing the vaccine will be allowed to “petition their Military Department’s Discharge Review Boards and Boards for Correction of Military or Naval Records to individually request a correction to their personnel records, including records regarding the characterization of their discharge,” Austin wrote in his memo. Such changes, however, are not guaranteed.

For those still in the service, being unvaccinated will no longer result in punishment—but could still carry implications for their careers. Austin specified in his memo that commanders will still be able to consider the “immunization status of personnel in making deployment, assignment, and other operational decisions.”

“We have a responsibility for the health and welfare of our forces. And so … depending on the situation and the circumstances, it’s incumbent on commanders to to ensure that they’re doing what they need to do,” Pentagon press secretary Brig. Gen. Patrick S. Ryder told reporters Jan. 12.