Skip to content
Artist rendering of a B-21 Raider concept in a hangar at Ellsworth Air Force Base, S.D., one of the future bases to host the new airframe. Northrop Grumman courtesy photo via USAF
Expand Photo 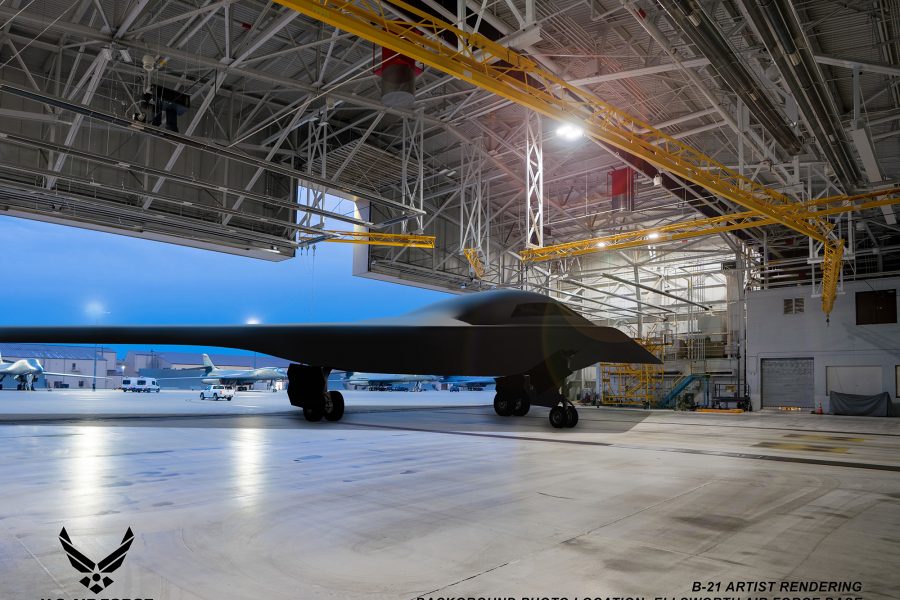 The images are the first official artists’s concepts released of the bomber since its name was announced at the Air Force Association Air, Space & Cyber Conference in September, 2016. The image released at that time—an artist’s concept portraying the jet in flight from above the front left quarter—was described as deliberately concealing some key aspects of the B-21’s design. The Air Force did not say whether the new images, created by Northrop Grumman, have been adjusted to conceal any details.

The images released Jan. 31, which show the aircraft from ground level in the front right quarter, are actually three versions of the same picture, superimposed on a view out a hangar door at Whiteman, Ellsworth, and Dyess Air Force Bases, which are the planned future bases for the B-21. Today they are the home of the B-2 Spirit and B-1 Lancer bombers, respectively.

Compared with the B-2, which it strongly resembles, the new B-21 images show the cockpit windscreen further back from the nose, with a notable flat space in that location. The air intakes on either side of the cockpit are rendered as straight-edge triangular openings, unlike the B-2’s scalloped airscoops, and the depth of the intake tunnel is clearly shallower and more blended into the upper surface.

The underside depth of the center body, or the “keel,” of the flying wing, is similar to that of the B-2. However, the upper surface shows a shorter fairing into the rear of the aircraft behind the cockpit, perhaps indicating that USAF left out accommodation for a third crewmember. The B-2 was provided with an ejection seat opening for a third crewmember, should that have ever been required, but no such crew station was ever installed there. The space is used instead by the pilot or mission commander for catnaps during 40-plus hour missions.

The landing gear rendering in the images is very akin to that on the B-2, with similar positioning and nose gear doors. The image suggests the aircraft crew compartment is accessed through the nose gear area, as it is on the B-2, and the nose gear is positioned further back from the nose than it is on the B-2. The picture also suggests that each of the main landing gear rests on two large wheels, instead of four on the B-2, perhaps owing to the B-21’s smaller size and weight. The landing gear doors also have more angles than those on the B-2, and may possibly fold like those on the F-22. No new information can be gleaned by the aircraft’s “shadow” on the hangar floor, which confirms the kite-like shape of the aircraft as seen in the original artist’s concept.

The Air Force did not offer any comment with the release of the new images, or why they were released at this particular time.