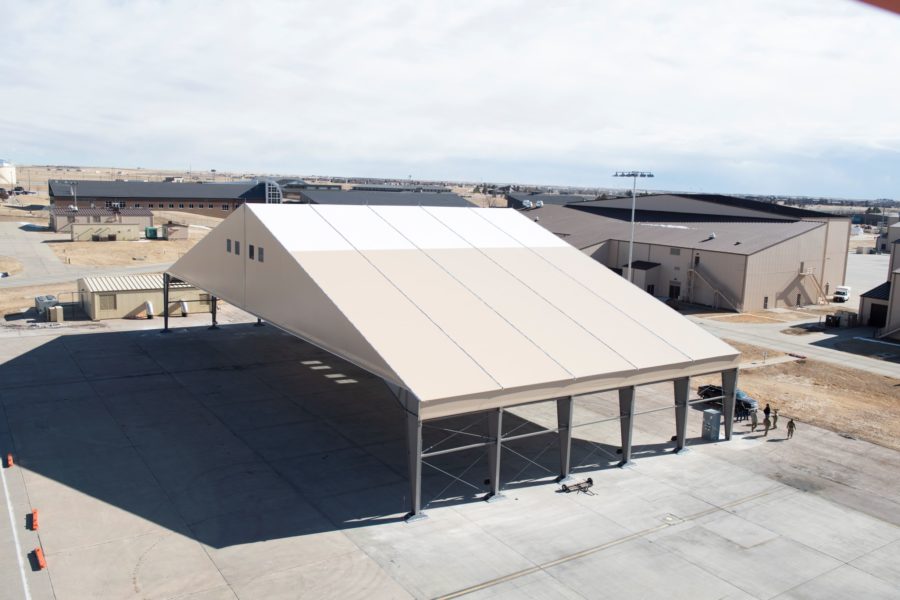 B-21 Bomber Shelter May Reveal Size of Secret Jet

Editor’s Note: The Air Force has clarified the size of the shelter. It is actually big enough to hold a B-2 bomber. See our follow-on coverage.

The Air Force has erected a prototype temporary shelter for the B-21 bomber at Ellsworth Air Force Base, S.D.; one of a number being evaluated for use at B-21 bases, depots, and potentially at forward deployment sites. An image released with a press release about the shelter, however, may also divulge the dimensions of the aircraft, which have never been revealed.

By comparison, the B-2 bomber has a wingspan of 172 feet and a length of about 70 feet. Temporary, deployable, inflatable shelters for that aircraft measure 250 feet by 126 feet, indicating the potential margin required around the edges.

Based on these dimensions, the B-21’s wingspan could be about 140 feet, if its wing sweep corresponds to that of the B-2, and having a length of about 50 feet. Air Force Magazine has previously estimated the size of the B-21 as having a wingspan of no more than 150 feet and a length of 55 feet.

The Air Force could not immediately comment on the size of the shelter.

The shelters would permit easier work on the bombers outside hangars, to protect them from the elements, and to get them in the air faster at need.

The structures are intended to help extend the life of the B-21 by limiting ultraviolet exposure from the sun, limiting snow accumulation and melt, and reducing de-icing operations “over time,” Col. Derek Oakley, Air Force Global Strike Command’s B-21 Integration and System Management Office director, said in a press release. The shelters “also help us generate sorties more quickly by eliminating the need to always have to move aircraft in and out of hangars.”

Major maintenance operations, however, “will still be performed indoors in hangars, but the B-21 Raider design will also provide us the flexibility to perform routine maintenance right on the flightline,” he said.

The shelter built at Ellsworth is an open-air affair with a peaked roof; more akin to a sunshade than a hangar.

Oakley said several designs will be considered, and “we will collect a few years of data on the shelters and then incorporate those data into the final Environmental Protection Shelter design.” The B-21 will likely be based at Ellsworth, Whiteman Air Force Base, Mo., and Dyess Air Force Base, Texas, but Ellsworth was chosen as the shelter test site because it has the most “extreme and diverse” weather conditions of the three.

Each B-2 Spirit bomber has its own hangar at Whiteman, and the Air Force has a number of inflatable, closable shelters designed for it, used in deployments to places like Diego Garcia and Guam, so the B-2’s temperature-sensitive low observable treatments can be cured on deployment if necessary. Since the B-21 is somewhat smaller than the B-2, those shelters will likely also be usable by the B-21.

The B-21 Integration and System Office is co-located with the B-21 Program Office at the Air Force’s Rapid Capabilities Office “to ensure tight collaboration” between operational units and the acquisition team, the Air Force said.

RCO Director Randall G. Walden told Air Force Magazine in a recent interview that bomber maintainers and technicians have been included in all aspects of the B-21’s design and development phase, to ensure the jet is easy to maintain in operational service.

“Throughout the engineering and manufacturing development phase, sustainment and maintenance personnel have been integrated into every design decision we make to ensure technical solutions do not inadvertently result in sub-optimal outcomes once the weapon system is fielded,” said Col. Jason Voorheis, B-21 system program director and acquisition lead. Sustainability and maintainability requirements have been “at the forefront throughout the design and development phase” of the B-21, he said in a press release.

Ellsworth recently held an industry day to solicit interest in building other B-21-specific facilities on the base, such as a General Maintenance and a Low-Observable Maintenance hangar.

While Dyess, Ellsworth, and Whiteman are the preferred main operating bases for the B-21, they will not be formally designated as B-21 bases until this summer, with the conclusion of environmental impact studies. No additional impact is expected, because all three bases now host USAF bombers. Ellsworth is the preferred location for the first B-21 squadron, with Dyess the second preference. The Air Force is already retiring some of the B-1 bombers now based at these locations.