Skip to content
Defense Secretary Lloyd J. Austin III and Chairman of the Joint Chiefs of Staff Gen. Mark A. Milley speak at a Pentagon press briefing addressing the end of the Afghanistan War on Sept. 1, 2021. Screenshot photo.
Expand Photo 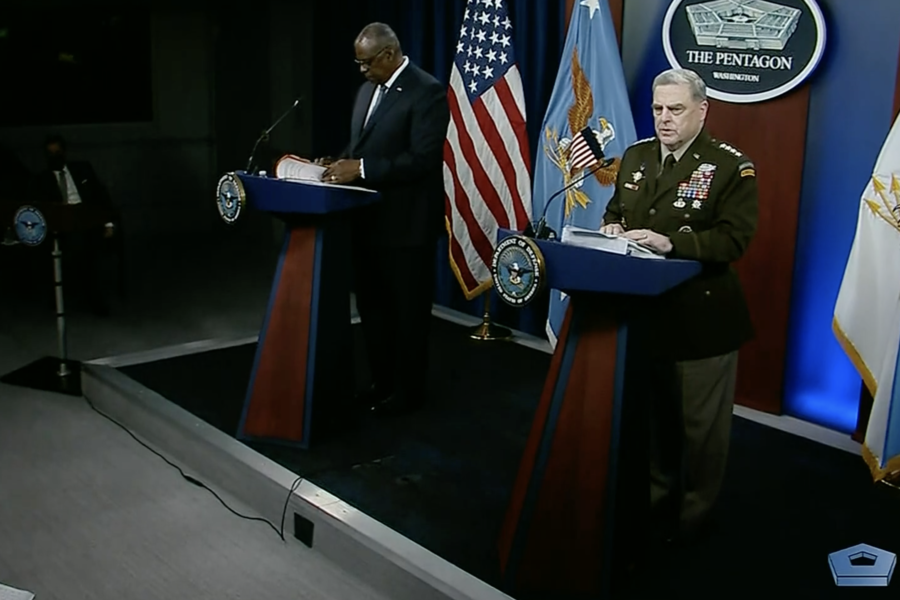 The service of more than 800,000 Afghanistan War veterans was not in vain, and it helped protect America from a terrorist attack for 20 years, senior Pentagon officials said Sept. 1.

“Right now, it’s time to thank all of those who served in this war,” Defense Secretary Lloyd J. Austin III told members of the media. “We will never forget what you did and what you gave.”

Austin reflected on the 20-year-long conflict that began with the al-Qaeda attacks of 9/11 and eventually cost 2,461 American service members their lives and wounded more than 20,000.

Austin said the evacuation mission, which rescued 124,000 Afghans and third-country civilians and about 6,000 American citizens and concluded just before midnight Aug. 30, was “heroic” and “historic” under trying and dangerous conditions.

“They were operating in an immensely dangerous and dynamic environment, but our troops were tireless, fearless, and selfless,” he said. “They ran an international airport, they sped up visas, they fed the hungry, they comforted the desperate, and they got plane after plane after plane into the sky.”

Chairman of the Joint Chiefs of Staff Army Gen. Mark A. Milley said a total of 778 sorties were flown, including 387 U.S. military C-17 and C-130 aircraft and 391 non-military aircraft.

Thirteen service members were killed during the evacuation operation when an Islamic State-Khorasan group suicide bomber detonated at the southeast gate of the Hamid Karzai International Airport in Kabul, in one of the worst attacks on Americans in Afghanistan during the 20-year war.

“Those Soldiers, Sailors, and Marines gave their lives so that others may live free,” Milley said. The Afghan refugees “will now live in freedom because of American bloodshed on their behalf.”

Both leaders admitted there would be time for after-action reports and lessons learned from the Afghanistan experience, but that its core mission had been achieved.

Having evacuated all military personnel and aircraft from Afghanistan and with no basing agreement in the region, the U.S. military counterterrorism mission in Afghanistan now relies on “over-the-horizon” capabilities, such as drone flights from Gulf bases located four hours away.

The Pentagon for months has attempted to secure a basing agreement in neighboring countries to facilitate intelligence, surveillance, and reconnaissance as well as strike capabilities. After leaving the press briefing room, Milley told Air Force Magazine progress is being made in that effort.

However, any future possibility of cooperation with the Taliban remains unclear.

“We were working with the Taliban on a very narrow set of issues, and it was just that, to get as many people out as we possibly could,” Austin said in the briefing room. “I would not make any leaps of logic to broader issues.”

Milley, who has met with Taliban leadership in the past year, said counterterrorism cooperation against ISIS-K was “possible.”

“I can tell you, from personal experience, that this is a ruthless group from the past, and whether or not they change remains to be seen,” Milley said of the Taliban. Pressed on prospects for cooperation, he said it was “possible.”

The mission to evacuate any remaining Americans and Afghans is now a diplomatic one with interagency partners. Austin said he will travel to Gulf nations to thank regional partners for their assistance in the evacuation effort.

It is believed that there are up to 200 American citizens in Afghanistan who desire to leave, along with several thousand Afghans.

Both leaders acknowledged the pain and anger that American veterans of the Afghanistan War may now be facing.

“We are all conflicted with feelings of pain and anger, sorrow and sadness, combined with pride and resilience,” Milley said. “One thing I am certain of for any Soldier, Sailor, Airman, or Marine, and their family, your service matters. And it was not in vain.”