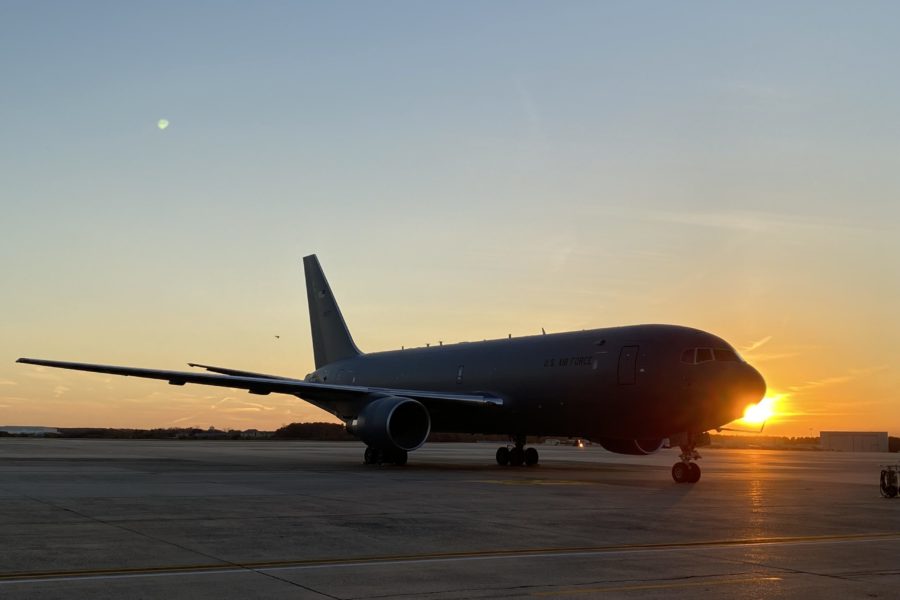 JOINT BASE MCGUIRE-DIX-LAKEHURST, N.J.—The arrival of two KC-46 Pegasus refuelers to the 305th and 514th Air Mobility Wings on Nov. 9 proved both joyous and bittersweet for Airmen as the new capability signaled the end of the KC-10 era at the base even amid continued concerns about air refueling capacity.

When the roaring new engine of “Pudgy 01” powered down for the first time, silhouetted by a cloudless blue sky at the mouth of Hangar 2021, Joint Base McGuire-Dix-Lakehurst’s role as the East Coast hub for next-generation global refueling operations came into clearer focus for hundreds of Airmen and special guests.

Still, base commanders admit the new platform, hampered by delays and pending Boeing technology fixes, will likely not be ready to take on missions for a year.

“We can certify those for operational use now, so the KC-46 will take up that bandwidth and certain elements and mission taskings to allow the main tanker force—the KC-135 and the remaining KC-10s—to continue, to deploy and operate around the world and in other capacities,” he added.

McGuire will receive 24 KC-46 refuelers over the next 18 months and will retire its remaining 21 KC-10s in that time. Seven have already been sent to the boneyard, with three more scheduled for divestment before the year is out.

However, since 2020, there have been at least eight Category 1 deficiencies (six in 2020 and two this year) that have prevented the KC-46 from conducting real-world missions. On the day of the celebratory arrival of its first two aircraft, base leaders insisted such fixes were normal.

“Like any weapon system, there’s challenges and upgrades and block upgrades that occur throughout the life cycle of that aircraft. It’s going to be similar with the KC-46,” Wiederholt said.

The six Category 1 deficiencies in 2020 included auxiliary power unit duct clamp cracks, a problem with the boom telescope actuator preventing the refueling of slower aircraft, and most importantly, a problem with the Remote Vision System (RVS) that made it hard for boom operators to discern depth perception in certain lighting conditions. The RVS fix is not due for three years, but Boeing promises an enhancement soon.

The deficiencies delayed initial operational test and evaluation for the KC-46.

Wiederholt doesn’t expect McGuire’s KC-46s to be tasked for missions for at least a year, even as KC-10s move to the boneyard at a pace of about one a month beginning in January 2022.

“It’s going to take us about that long to get a squadron fully up to speed and all of our aircrew and maintainers ready to generate, fly, and then operate the aircraft,” he said. “I would say that that’s pretty normal whenever you receive a weapon system.”

At present, the 2nd Air Refueling Squadron has four trained KC-46 crews and is building up to 26 crews over the next year to 18 months.

The KC-10 played a prominent role during operations Desert Shield and Desert Storm in 1991. In the post-9/11 era, KC-10s were integral to protecting the homeland and were used nearly 1,400 times during operations Enduring Freedom and Iraqi Freedom.

“As a longtime KC-10 guy, that’s the only weapon system that I’ve flown,” said 87th Air Base Wing vice commander Col. Robert D. McAllister. “There is a little bit of sadness.”

McAllister flew 4,900 hours over a 22-year career in the KC-10 that included multiple deployments to Iraq. His most memorable flight, however, was a simple repositioning after deployment in November 2011 when he took on a 30-year Air Force veteran on space available from Scott Air Force Base, Ill., to Travis Air Force Base, Calif.

“My most special flight in a KC-10 is [when] my dad was a retiree,” he said of his father, who has since died. “So, here he gets to see his son doing what he loves on the weapon system.”

“It was an honor for me to take the first one from McGuire and the first one in the whole fleet to the boneyard,” he said, noting the mixed crew of Reserve and Active-duty members that flew the KC-10 to its resting place at Davis-Monthan Air Force Base, Ariz.

While the arrival of the two KC-46s drew mixed emotions, McAllister thinks about the Air Force’s new capabilities and the excitement he senses in young Airmen.

“It’s gonna be a great weapon system,” he said. “Everyone says they love to fly it. They’re excited about it. It’s gonna bring these new capabilities. It’s like getting a new car.”

“It’s a super comfortable plane to fly, all the advanced avionics we could want in the cockpit, tons of situational awareness,” he said.

Among the most important features is onboard equipment that gives the pilot what Arthur called “battlespace situational awareness,” rather than relying on radio calls from AWACS and other command and control platforms for updates.

“So before, you’re just kind of waiting on the C2 platforms to give you the awareness that they think you need, whereas now we have more of an ability to get the awareness on our own,” he said.

Senior Airman Dominic Baverso, 21, was not even born when the KC-10, with its round, steam dials, first went into service. For the boom operator, making the transition to the KC-46 has been smooth, even with reported RVS challenges. Boom operator Tech. Sgt. Kyle Breitenbach from the 78th Air Refueling Squadron at Joint Base McGuire-Dix-Lakehurst demonstrates the use of the KC-46 Pegasus boom controls Nov. 9, 2021. Photo by Abraham Mahshie Hundreds of Airmen and special guests at Joint Base McGuire-Dix-Lakehurst celebrated the arrival of the first two KC-46 Pegasus refuelers Nov. 9. Photo by Abraham Mahshie Boom operator Senior Airmen Dominic Baverso, 21, said the transition from the KC-10 to the KC-46 Pegasus has been smooth at Joint Base McGuire-Dix-Lakehurst Nov. 9, 2021. Photo by Abraham Mahshie “The technology now, it just tells you the issues flat out,” he said. Baverso explained that gauge readings from legacy platforms require a series of steps and prior system knowledge to diagnose a problem.

“There’s obviously still a need for systems knowledge. However, the airplane helps you come to a final decision as to what is happening in that moment,” he said. “It’s just honestly altogether a really awesome, really great airplane, really capable airplane, especially compared to the legacy platforms.”

The Fixes and the Future

McGuire base commanders and lawmakers briefed on the KC-46 deficiencies still expressed confidence that America’s global refueling requirements will not be diminished even as the number of tankers in the active fleet grows smaller.

Brine offered that the pace of training is keeping pace with forecasts for global tanker needs. Likewise, until it fully divests, the KC-10 will continue to operate missions.

McAllister said U.S. Transportation Command and Air Mobility Command have a plan to “augment” during the next two years of transition to the KC-46.

“In terms of our adversaries, we still have the ability and the capacity with about 68 percent of our tankers in the Guard and Reserve, so we rely on that,” he said.

McAllister said the Air Force is providing funds to get more KC-135 capacity from the Guard and Reserve on a volunteer status.

Wiederholt added that with interim operational capability, which frees up the Pegasus for more missions, the KC-46 will begin to take up bandwidth in the near-term.

“That is the key component of the interim capabilities release,” he said. “We can certify those for operational use now.”

“We’ve been able to get a good sense of the choreography of that transition,” he told Air Force Magazine.

Kim also said he was confident in Boeing’s ability to make the course corrections needed on schedule.

“I’m not concerned because I feel like we’ve had very honest conversations over the years … about this aircraft and making sure that we have that commitment to get everything to where we need to be,” he said. “There’s always going to be some challenges when there is a changeover, that kind of era of technology.”

Boeing told Air Force Magazine in a statement that the new RVS 2.0 system with full-color cameras, 4K ultra-high definition screens, and high dynamic range sensor and display technologies is expected to be delivered in 2024.

“The specific timeline is subject to the efforts of both Boeing and the US Air Force,” the statement read.

In the meantime, Boeing is implementing an “interim enhancement” known as enhanced RVS, which includes upgrades that reduce image distortion.

“This will improve human factors for the aerial refueling operator by eliminating physiological effects and eye fatigue,” the statement read.

For the Airmen of McGuire, the arrival also means a new culture that will involve cross-training C-17 and C-130 crews.