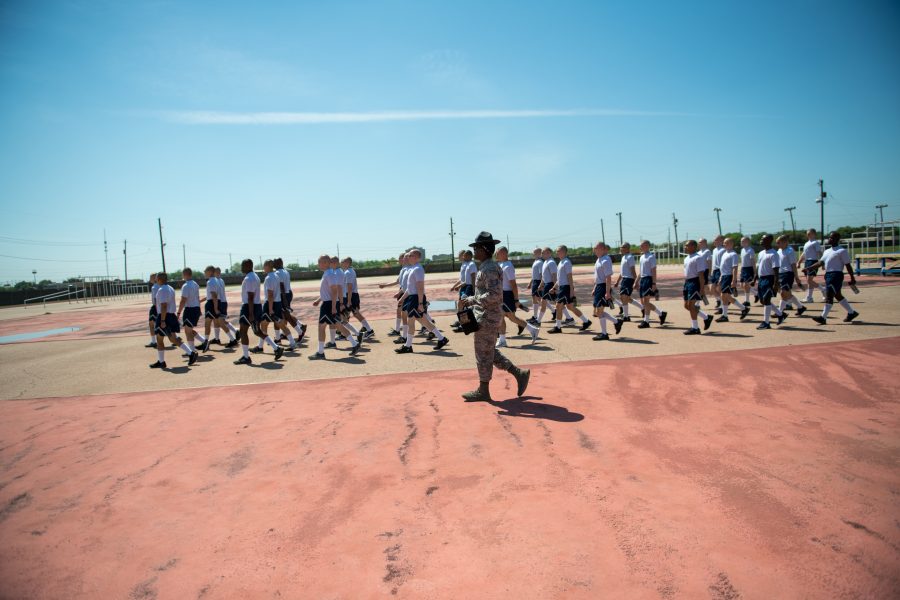 The Air Force will send 60 Basic Military Training recruits to Keesler Air Force Base, Miss., “no earlier than” April 7 to try and prove that locations other than Joint Base San Antonio-Lackland, Texas, can also host BMT during contingencies such as the COVID-19 pandemic, 2nd Air Force Commander Maj. Gen. Andrea Tullos told reporters March 30.

The proof of concept plan was first announced in a March 26 Air Education and Training Command release, in which Tullos said 2nd AF was intentionally exploring ways to spread out BMT under extenuating circumstances “to provide surge capacity,” make its training pipeline more agile, “help provide relief to the military training instructor staff, and ease the strain” on the 2nd AF’s BMT infrastructure.

The contingency option is just that and is not intended to be a long-term construct, Tullos said. It is designed to be implemented on a surge timeline of 180 days, but can be sustained for longer if necessary.

The initiative is part of a wider series of changes—such as the implementation of a 14-day restriction of movement period for recruits upon arrival—being made to the way recruits enter USAF’s training pipeline on a phased basis in hopes of protecting recruits and instructors from the virus, the release explained.

Although multiple Air Force Bases could serve as contingency locations for BMT, officials focused on bases that already hosted technical training, including:

Hosting both BMT and tech school at a single location limits the need for travel, a factor whose importance was underscored by the COVID-19 pandemic.

“By shipping them [recruits] directly to Keesler, we don’t have to expose them and expose the community in a transportation hub, like a commercial airport, where we know those locations are vulnerable to spread,” she explained during a conference call.

Keesler’s medical and expeditionary training capabilities were the added factors that shot it to the top of the list of possibilities, she said.

“After we made the decision based on COVID-19’s conditions, we looked at what are those training objectives that we need at basic training, and which of our installations is currently best postured to do that,” she said.

Despite training on an abbreviated, six-week timeline, Keesler-based recruits will follow “essentially the same curriculum” as their counterparts at Lackland, Tullos said.

Each installation may deliver different blocks of the BMT schedule at different times, based on each location’s unique logistics, geography, and training settings. Keesler’s smaller size reduces “transportation times, in some cases”—a factor that allows the NAF “to do things a little differently” there, she added.

Despite these differences, Tullos said, the quality of training received at Keesler and the resulting levels of readiness will be identical to the training at Lackland.

“At the end of the day, the Airman that comes out and marches across the parade field is gonna be the same quality Airman that we deliver to our commanders,” she said.