Skip to content
A B-1 bomber from Ellsworth Air Force Base, S.D., and F-16s from Misawa Air Base, Japan, joined Japanese F-2s for a bilateral exercise in April. Gen. Timothy Ray said USAF bombers may not be deployed to Guam "but we can come and go anytime they need us." Air Force photo by Tech. Sgt. Timothy Moore.
Expand Photo 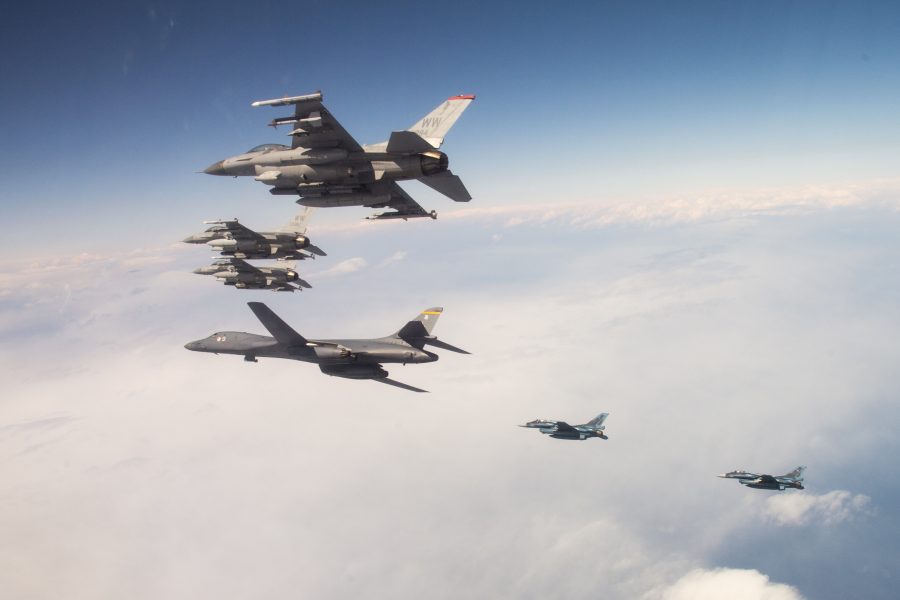 AFGSC’s New Plan to Deploy Bombers Across the Globe

Air Force Global Strike Command will regularly rotate a small number of bombers to the Pacific and Middle East theaters to maintain a regular deterrence presence and to conduct combat operations as needed, but it will no longer operate out of bases such as al-Udeid Air Base, Qatar, or Andersen Air Force Base, Guam, for extended periods. The move keeps USAF strategically relevant and operationally unpredictable, AFGSC boss Gen. Timothy Ray said during an AFA Mitchell Institute for Aerospace Studies virtual event April 29.

“We can come and go anytime they need us, we don’t need to be there physically,” Ray said.

Changing Bases in the Middle East

The January attack on U.S. forces at al-Asad Air Base inside Iraq, showed that Iran’s proxy forces are capable of attacking as far as Saudi Arabia, prompting the the Air Force to move its strategic bomber deployment further away, to Diego Garcia in the Indian Ocean. Since 2001, USAF has depended on al-Udeid to host bomber deployments. It even expanded the runway there in 2016 to allow B-52s to deploy to the base for the first time in 25 years. However, the operational reality in the Middle East has forced the Air Force to change how it operates.

Iran’s ability to attack al-Udeid was long known, though recent actions have shown the country’s willingness to do so.

“It didn’t take al-Asad for me to see that you don’t want to park your strategic assets in the ballistic missile engagement zone, we’ve thought like that for a long time,” Ray said.

Al-Udeid was a convenient location for bombers to support counter terrorism operations in Afghanistan as well as Iraq and Syria. The base in Diego Garcia has supported bomber operations, but not at the same scale or for an extended period of time.

“We just moved closer to save gas,” Ray said about having bombers in Qatar. “But when the operational reality enters the equation, you can easily step back and still cover the targets.”

The 20th Bomb Squadron did just that with its recent deployment, which started the same day that Iran attacked al-Asad. While they were assigned to the 379th Air Expeditionary Wing at al-Udeid, they operated from Diego Garcia and flew more than 90 sorties totaling 1,300 combat hours from the base. The B-52s were able to meet 100 percent of their air tasking order requirements, according to an Air Forces Central Command release.

The Air Force is not ruling out al-Udeid for future bomber deployments, or other bases inside the “threat ring” of adversary ballistic missiles, 8th Air Force Commander Maj. Gen. James Dawkins told Air Force Magazine in March. The preference is to avoid those threats, but “we will deploy where needed to bring the capabilities required,” he said.

“With more adversaries acquiring ballistic missile capabilities, we have to balance force protection measures to mitigate our exposure to these threats when we have strategic assets deployed to any base,” he said.

Because the bombers will not be permanently stationed in the Middle East, they aren’t regularly available for air tasking orders to conduct daily strikes. However, Ray said the Global Strike air operations center is in regular coordination with the combined air operations center at al-Udeid, along with others across the globe, so “the integration of air across those boundaries is second nature,” he said.

An example of this took place in October 2019, after Iranian-backed Houthi rebels used drones to strike oil facilities within Saudi Arabia. Ray and Air Forces Central Command boss Lt. Gen. Joseph Guastella brainstormed a response to show U.S. strength and deter Iran. As a result, two B-1Bs made an unannounced flight directly from Ellsworth Air Force Base, S.D., to Prince Sultan Air Base in Saudi Arabia. The bombers landed, reset, and flew a “presence mission” in the Persian Gulf, and then returned home.

“And it worked brilliantly,” Ray said. “So you can generate those kinds of things.”

While the bombers have a longer route to fly, these sorties can be planned and flown quickly.

“The further we deploy from a given fight means longer flight times and in some cases tanker support,” Dawkins said. “Bombers bring range, persistence, and precision to any fight.”

B-1s in the Pacific

When the 69th Bomb Squadron left Andersen, it brought an end to the basing of bombers in the Pacific, which USAF had done since 2004. While the Air Force almost immediately sent B-1s back to the area in direct flights from the U.S., there has not been a nuclear bomber presence in the Pacific since the decision was made to end the Continuous Bomber Presence.

Ray said for the immediate time being, that will remain. Up until this month, two of the service’s four B-52 squadrons had been deployed and they need time to “reset.” B-1s bring a different capability, including the ability to fly faster and carry other types of weapons that are important in the region. Lancers carry AGM-158C Long-Range Anti-Ship Missiles and AGM-158B Joint Air-to-Surface Standoff Missile-Extended Range missiles, “and I think you’ll see that it has great operational benefit to our partners and allies,” he said.

“We will bring nuclear bombers into the theater on a regular basis,” Ray said. “The B-52s are simply resetting, [so] the B-2s are picking up a little bit more of the load. B-2s will come out episodically.”

It’s also just easier for the Air Force to send B-1s because they are conventional.

“There’s a few people who get a little alarmed when you bring a nuclear bomber into their airspace,” Ray said. “We look at the B-1 as a great capability: I can land it in a lot of places physically that I can’t land a B-52, and I can operate with more people. So we’re going to feature that a little bit more in the Pacific.”

Now that all bomber squadrons are based in the United States, where they have simulators and access to ranges that aren’t available while deployed, they will soon be “in very good shape” and be available for additional long-distance direct flights and small task force rotations, Ray said.

“You’ll see all three bombers operating in the Pacific,” he said.