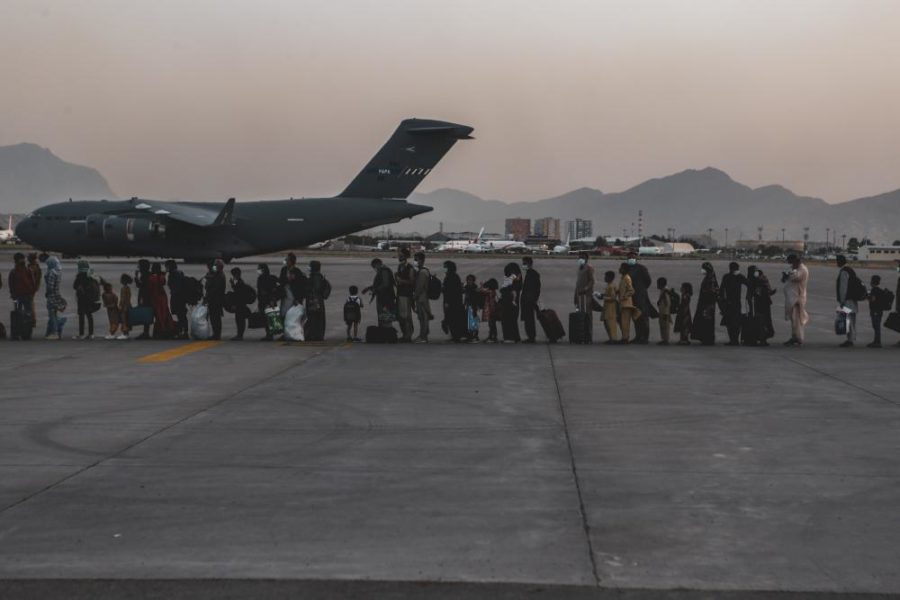 The U.S. airlift mission in Afghanistan is continuing, following one of the deadliest attacks on American forces in the 20-year war.

An expected Islamic State Khorasan (ISIS-K) suicide bomb attack killed 13 U.S. service members and injured 15 more at a gate leading in to the Hamid Karzai International Airport on Aug. 26. Dozens of Afghans crowding the gate to the airport in desperation to leave the country also were killed, and many more injured.

“These American service members who gave their lives … were heroes. Heroes who have been engaged in the dangerous, selfless mission to save the lives of others,” President Joe Biden said in remarks at the White House.

U.S. military commanders were “unanimous” in their recommendations to continue the mission of evacuating Americans and qualified Afghans from the country, Biden said. The U.S. “will not be deterred by terrorists. We will not let them stop our mission.”

American officials believe they know the ISIS-K members behind the attack, and those responsible will be hunted down.

“To those who carried out the attack, … we will not forgive, we will not forget,” he said. “We will hunt you down and make you pay. I’ll defend our interests and our people with every measure at my command.”

“We continue to focus on the protection of our forces and the evacuees as the evacuation continues,” McKenzie said. “Let me be clear, while we’re saddened by the loss of life, both U.S. and Afghan, we continue to execute the mission.”

U.S. forces have monitored “threat streams” of more possible attacks by ISIS, including targeting aircraft taking off. Some coalition planes have seen small-arms fire, and while aircraft such as U.S. Air Force C-17s, have countermeasures, he does not believe ISIS has a surface-to-air missile threat. The group is also reportedly looking to use other suicide bombs, including vehicle-borne ones, to target the airport.

U.S. forces have shared “versions” of this intelligence to the Taliban outside the gates of the airport, and McKenzie said he does not believe the group is connected to or allowed the Aug. 25 attack to occur.

At the airport, U.S. forces are flying surveillance aircraft such as MQ-9 Reapers and other drones to monitor the situation. Navy F/A-18s, USAF F-15s and MC-130s, and Army AH-64s also are flying above the airport.

While the U.S. troops have attempted to push back some of the perimeter for safety, there’s no other way to search potential evacuees than face-to-face.

“This is close-up work,” McKenzie said. “The breath of the person you are searching is upon you. While we have overwatch in place, we still have to touch the clothes of a person that’s coming in. I think you all can appreciate the courage and the dedication that is necessary to do this job, and to do it time after time.”

As of Aug. 26, service members at the airport had searched approximately 104,000 people as part of the evacuation mission. After the attack, there were 5,000 people at the airport awaiting airlift, and “a number of buses” came on to the airfield in the hours following, McKenzie said.

“The plan is designed to operate while under stress and under attack,” he said. “And we will continue to do that. We will coordinate very carefully to make sure that it’s safe for American citizens to come to the airfield.”

Defense Secretary Lloyd J. Austin III, in a statement, said terrorists killed the service members “at the very moment these troops were trying to save the lives of others.”

“We mourn their loss. We will treat their wounds. And we will support their families in what will most assuredly be devastating grief,” he said. “But we will not be dissuaded from the task at hand. To do anything less—especially now—would dishonor the purpose and sacrifice these men and women have rendered our country and the people of Afghanistan.

Department of the Air Force leaders in an Aug. 26 statement expressed sympathy to the U.S. servicemembers and Afghans killed in the attack.

“U.S. Air and Space Force personnel will continue our work supporting the safe evacuation of U.S. citizens and other evacuees from Afghanistan,” the statement said. “Our collective resolve will not be deterred by these senseless attacks, and we will remember and honor those who made the ultimate sacrifice in service to others.”

Editor’s Note: This story was updated at 6:07 p.m. on Aug. 26 to include additional information from the White House.