Skip to content
The Pentagon before and after. Photo courtesy of Jason Powell. Original photo taken by Lisa Borges, courtesy of the U.S. Navy.
Expand Photo 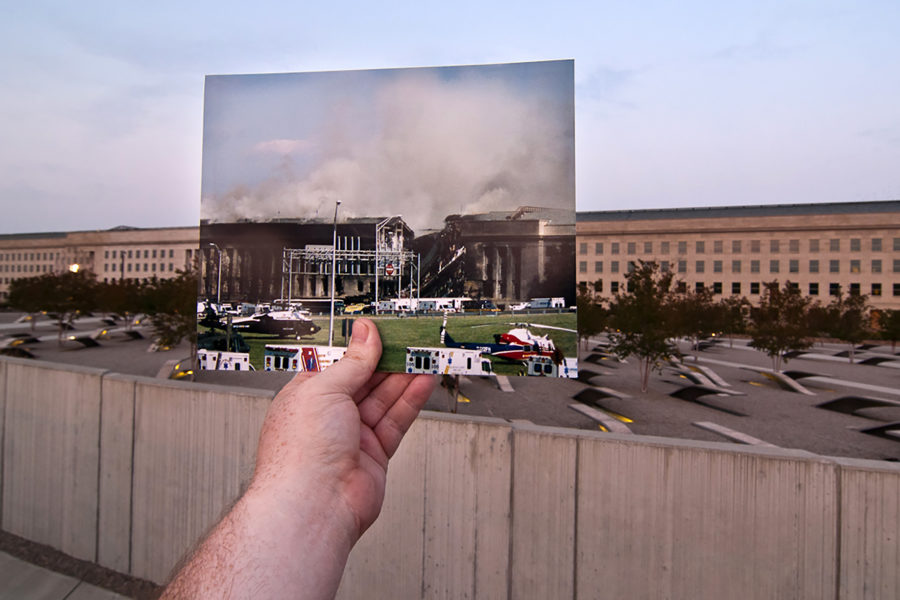 Unless you were too young—or perhaps not yet even born—we all remember 9/11: Where we were, what we were doing, what we did next. Two decades hence we are still recollecting, still coming to grips with what happened that day and what has transpired since. Here, in 20 pictures, is a look back at these 20 years. The moment has never lost its shock value. And Americans have not lost their resolve. Our war in Afghanistan is over. The war against terrorism—the war for liberty and for freedom from terror—continues.

Click on the photo to enlarge it and see the captions. A New York City fireman calls for 10 more rescue workers to make their way into the rubble of the World Trade Center in September 2001, after a terrorist attack destroyed the buildings. Journalist 1st Class Preston Keres/USN In memory to those who died in the terrorist attack, the flag that flew over the World Trade Center on September 11, 2001 is held by members of the United States Olympic team, is displayed as the US national anthem is played at the Opening Ceremonies of the Salt Lake 2002 Winter Olympics in Salt Lake City. JO1 Preston Keres, USN In 2004, two beams of light represent the former Twin Towers of the World Trade Center during the 2004 memorial of the September 11, 2001 attacks in New York City. Derek Jensen The Pentagon before and after. Photo courtesy of Jason Powell. Original photo taken by Lisa Borges, courtesy of the U.S. Navy. First Responders salute a large American flag as it’s unfurled over the west side of the Pentagon at sunrise in Washington, D.C., Sept. 11, 2017. Navy Petty Officer 1st Class Dominique Pineiro 22nd Security Forces Squadron members perfrom a flag folding ceremony during Patriot Day at McConnell Air Force Base, Kan. The ceremony remembered the terror attacks of September 11, 2001 with a Patriot Day ceremony, to pay special tribute to the victims and families of those lost in New York, Pennsylvania and in the Pentagon. Senior Airman Jenna Caldwell An Airman salutes during the sequence of events at the 9/11 memorial ceremony held on Joint Base Andrews, Md. Sept. 11, 2019. Airman 1st Class Noah Sudolcan