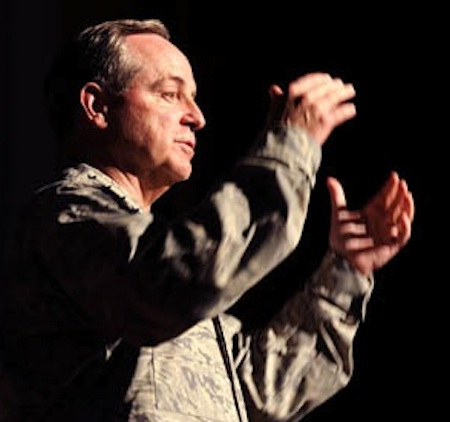 The Air Force has been preparing for potential military action in Syria, but it won’t be as prepared as it would like to be, if the President gives the order to act, due to the budget sequester’s impact, said Chief of Staff Gen. Mark Welsh this week during stops in Japan as part of his Asia-Pacific tour. “The Secretary of Defense has asked us to prepare a range of options, and we have been doing that planning,” said Welsh in an Aug. 26 interview with the Daily Report in Tokyo. “This is part of our due diligence,” he said. The set of challenges facing the US military is more complicated in Syria than it was in the lead-up to 2011’s military intervention in Libya, Welsh told airmen at Yokota Air Base and Misawa Air Base. Sequestration’s tradeoffs, such as grounding tactical combat squadrons earlier this year, degraded readiness and the service’s ability to perform the full spectrum of combat missions, he said. “That’s not a good place to be for us,” he said. Click here to continue to the full report.