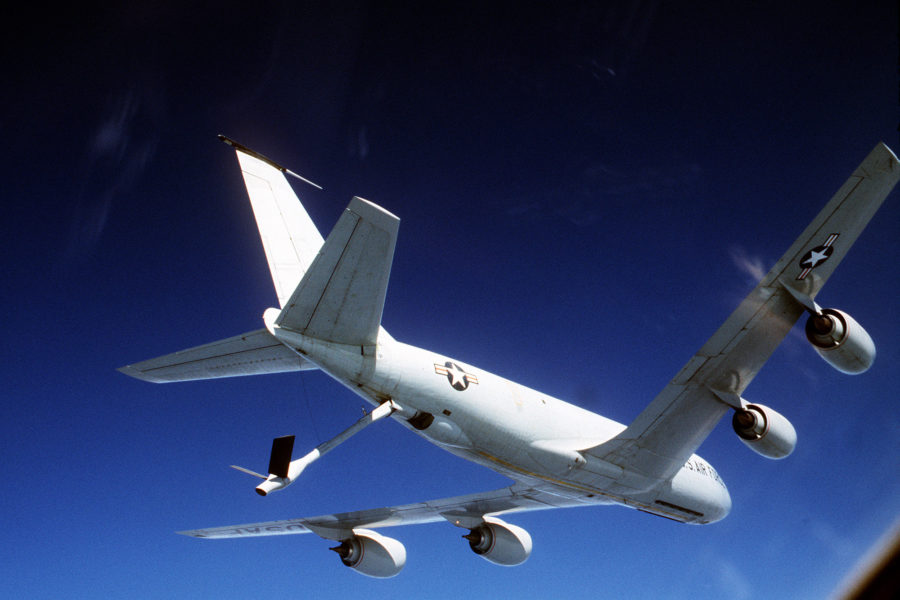 The KC-135 is an aerial tanker capable of simultaneous cargo and AE missions and has been the mainstay of the USAF tanker fleet for more than 60 years.

The C-135 family is similar in appearance to the commercial 707 but designed to unique military specifications and first flew on Aug. 31, 1956. The KC-135A fleet was delivered between June 1957 and January 1965, reaching IOC at Castle AFB, Calif., in 1957. KC-135s were re-engined under two separate but concurrent programs and redelivered as the KC-135E and finally the current KC-135R beginning in July 1984. KC-135s can be equipped with a podded Large-Aircraft IR Countermeasures (LAIRCM) system to track/jam IR missiles for high-threat missions. Modern features include a digital flight deck, Global Air Traffic Management upgrades completed in 2011, and Link 16 on a limited number of upgraded aircraft.

USAF plans to modify 395 aircraft with Block 45 upgrades: additional glass cockpit display for engine instrumentation, a radar altimeter, advanced autopilot, and modern flight director at a rate of 38 aircraft per year through 2026. FY21 begins replacement of obsolete long-distance oceanic satellite tracking/C2 through FY24, and adding a rudder position indicator to increase crew awareness and prevent accidents like the fatal crash in Kyrgyzstan in 2013.

USAF plans to retain the fleet 10 years beyond its planned service life, keeping some jets in service to at least 2050. Three KC-135s are undergoing conversion to WC-135R standards to replace Constant Phoenix.


More articles about the KC-135 Stratotanker

These USAF Units Are Flying in the Large, Joint US-South Korea Exercise

Van Ovost: Time to Invest in Next Generation of Tankers, Airlifters