Skip to content
An A-29 Super Tucano delivered to Air Force Special Operations Command on Feb. 23, 2021, is painted in the heritage color scheme of the P-51 Mustang and P-47 Thunderbolt flown by U.S. Army Air Forces during World War II combat operations in the China, Burma, and India campaigns (Circa 1944). Sierra Nevada Corporation photo. 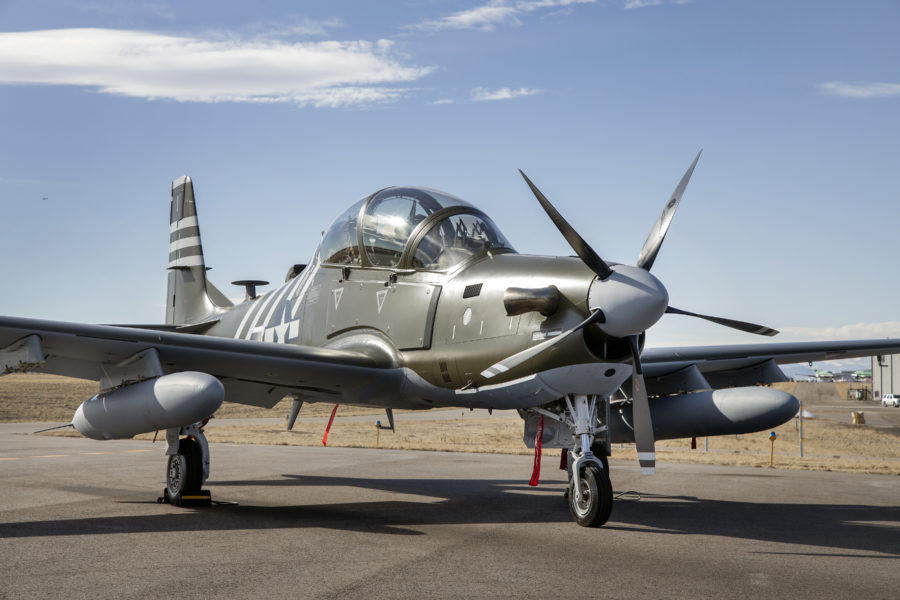 The A-29 Super Tucano is a turboprop light attack/armed reconnaissance aircraft designed by Embraer in Brazil and built under license by Sierra Nevada Corp.

USAF has long sought a cost-effective, manned light CAS/tactical ISR platform for operations in permissive counter-insurgency type scenarios. The A-29 was initially a contender for the Air Force’s Light Attack/Armed Reconnaissance (LAAR) requirement for approximately 100 aircraft which fell prey to budget cuts a decade ago. The service launched a renewed effort in 2017, kicking off the Light Attack Experiment (OA-X) to rapidly evaluate off-the-shelf CAS/ISR platforms to relieve pressure on existing, higher-cost fleets such as the A-10 and F-16. A fatal A-29 crash abruptly ended the flight segment of evaluations at Holloman on June 22, 2018.

Trials, however, yielded sufficient data for USAF to opt for two AT-6Bs and two (later increased to three) A-29s. The AT-6s assigned to ACC at Nellis will support tactics development and testing, while the A-29s slated for AFSOC will form the basis of a Combat Aviation Advisor and SOF-support capability.

USSOCOM is simultaneously looking to replace its AFSOC-operated U-28A fleet with as many as 75 enhanced capability “armed overwatch” aircraft. Congress, however, banned funding the effort through FY23 pending study and justification.

AETC’s 81st Fighter Squadron also operated the A-29 as part of the Train, Advise, Assist Command-Air (TAAC-Air) training of Afghan Air Force crews at Moody. USAF handed-off training to the AAF, graduating its final class of pilots in November 2020. A total of 13 countries operate the A-29 world-wide. All three AFSOC aircraft are slated for delivery in 2021.


More articles about the A-29 Super Tucano

Air Force Set to Get Rid of Small A-29, AT-6 Fleets, Program Official Says

USAF’s 2020 Accidents Include A-29 Crash That Disabled Airman

USAF Pilot Safe After A-29 Crashes in Afghanistan

Congress Wants USAF, SOCOM to Work Together on Light Attack

Air Tractor Wants Another Shot at a Light Attack Contract