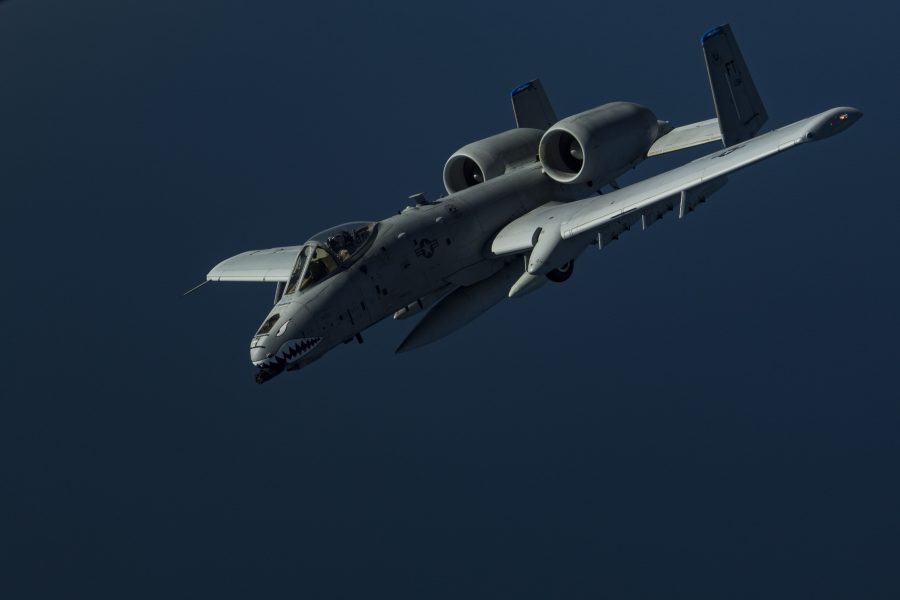 The Air Force’s future close air support portfolio will include seven squadrons of A-10s into the 2040s, along with light attack aircraft in partnership with some countries, but these efforts will be distinct from Special Operations Command’s pursuit of an Armed Overwatch aircraft, USAF’s top planner said April 16.

The A-10 remains “a very cost-effective way to get at close air support,” and USAF figures into the service’s “long-term” plans, said Lt. Gen. David Nahom, deputy chief of staff for plans and programs, during an AFA Mitchell Institute telecon.

“There is no more efficient platform in the low-end fight” than the A-10, “and that includes propeller-driven light-attack type platforms,” Nahom said. However, the A-10 is not equipped to survive in highly defended airspace, where the F-35 and other aircraft will handle the CAS mission, he noted.

USAF’s 2021 budget request looks to cut 44 A-10s from the fleet, along with dozens of other legacy aircraft. Nahom said the remaining seven combat squadrons of Warthogs is the “right number” to operate in permissive or lightly contested airspace.

“Seven, we think, is the sweet spot: three Active Duty, three [Air National] Guard, one Reserve squadron,” which should be enough for operations, test, and training, he said.

“Reducing the A-10 [fleet] size by 63 airplanes over two years [saves] a lot of money that we can now invest back into the A-10; the wings and all the structural things, as well as the avionics, to make sure it can integrate into the digital battlefield of the future. And we have those investments all paid for and ready to go,” Nahom said. The A-10 will remain a viable platform for places where the F-35 is not needed; where the enemy is not bringing a “double digit” surface-to-air missile threat.

“It brings something to the battlefield that nothing else brings, he said, referring to “that beautiful gun” among other attributes. The A-10 has been in the fleet since the mid-1970s, and “I don’t think anyone thought about flying A-10s to 2040 back then,” he noted.

The light attack experiment—in which USAF has been evaluating turboprop aircraft for both low-altitude engagement of insurgents as well as a manned intelligence, surveillance, and reconnaissance mission—will continue “on a very small scale” at Nellis Air Force Base, Nev., and Hurlburt Field, Fla, Nahom explained. However, it is, and always has been, oriented toward establishing partnerships with countries that can’t afford high-end fighters, both to give them indigenous capability against low-intensity adversaries and to bring them into a data-sharing arrangement with the U.S. and its other allies.

“Light attack started with allies and partners in mind” and it is where Chief of Staff Gen. David Goldfein’s “mind has been with that program all along,” Nahom said. It represents an “entry point” for countries without “the bankroll” for sophisticated systems to not only partner with USAF but allow them to integrate with their other platforms, if they have them.

While USAF will continue to work with allies and partners on light attack, Nahom said the service also is considering “expanding it to other areas, maybe some low-cost jet aircraft.”

Fulfilling SOCOM’s armed overwatch requirement was never the intention of the light attack experiment, and SOCOM’s need is probably for something very different.

The result of the light attack experiment “is not necessarily what our special operations partners need in an armed overwatch platform,” Nahom said. “We find we’re producing two different kinds of platforms.”

In extensive discussions between Nahom and his SOCOM counterpart, and between Goldfein and the SOCOM leadership, the decision was made to “move some Air Force money into SOCOM and let them develop whatever armed overwatch aircraft they needed.” He added, “This is not for replacing A-10s in a place like Afghanistan, this is for where SOCOM operates, very often in places where the U.S. Air Force isn’t around—think Central Africa—places far away from where we’re normally at.” SOCOM has a stated requirement for 75 Armed Overwatch aircraft.

The light attack aircraft, however, also will be able to operate from “austere locations,” Nahom said, providing special operators with “an extended amount of persistence overhead, and even offer some firepower when needed.” These attributes are “not necessarily what comes out of a light attack program.”

Both light attack and armed overwatch aircraft will be paired with the Airborne Extensible Relay Over-the-Horizon Network, or the AEROnet concept, which is a lightweight or wearable system for special operators on the ground to keep them connected with aircraft. “We will be looking at how we expand that program” to include more ground forces, Nahom said. AEROnet is designed to allow sharing of voice, video, and chat over smartphones, tablets, and mobile apps.

The Air Force said last month it is moving ahead with light attack experimentation contracts to Textron for its AT-6 and Sierra Nevada Corp. for it’s A-29 turboprop aircraft. Textron will use $70.2 million of USAF funding to provide two AT-6s, which it calls Wolverines, for training and support, as well as further development of AEROnet. Sierra Nevada has received $129 million for two aircraft and similar associated work.

SOCOM said earlier this month it intends to award up to four companies $4 million contracts to demonstrate an armed overwatch capability. The contractor ultimately chosen for the build will deliver over a five-to-seven year period following a downselect, SOCOM said.