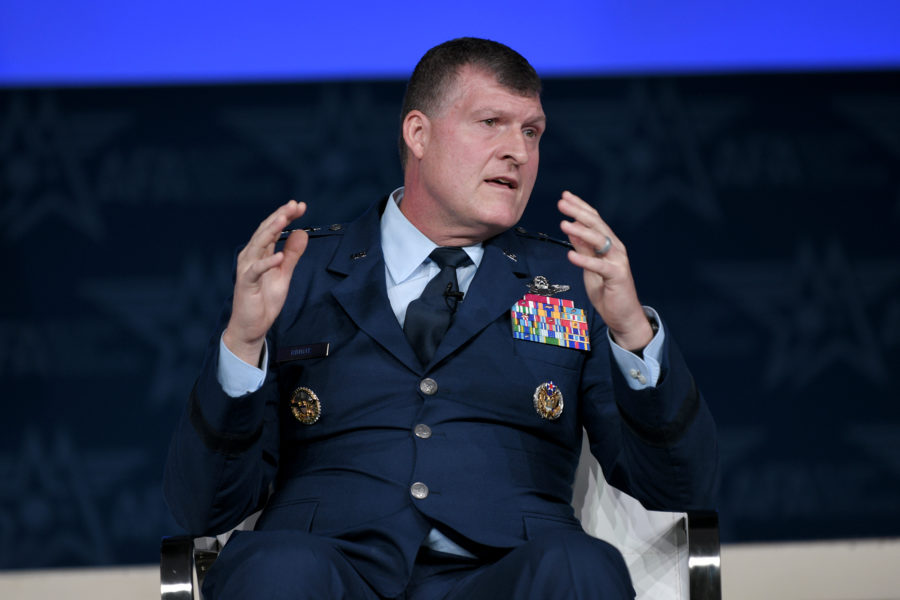 Better incorporating the joint force improved the outcome of a wargame held this summer, but a great deal of work will be needed to bring those “trans-domain” changes to fruition, Air Force futurist Lt. Gen. S. Clinton Hinote said.

In a Defense One talk on the Air Force’s future structure Sept. 27, Hinote said the Globally Integrated War Game, which included all the services and the Five Eyes international allies and partners, was meant to discover whether “it would be possible for the joint force to come together … in a new way, maybe with a new design, and [if there would be] different results” from recent wargames in which U.S. forces did not prevail in a number of real-world scenarios.

The results were promising, Hinote said, although he declined to say whether the notional “blue force,” which he commanded, was victorious.

“What we found was that, sure enough … if we implemented Force Design”—the Air Force’s planned 2030s/2040s force structure—“the reforms, the new equipment, the new concepts, all working together into something that feels holistically better … could win,” Hinote said.

Force Design includes such capabilities as the Next Generation Air Dominance (NGAD) family of aircraft, new missiles, constellations of sensors, and uncrewed aircraft, Hinote explained, but most importantly, the joint all-domain command and control system that will link sensors and shooters in all the branches together.

“I don’t necessarily go around talking about winning wargames,” Hinote said. “What I do believe is that you learn a lot through them. And what I will say is, you get to a better outcome if you get after this Force Design.”

Air Force Secretary Frank Kendall and Chief of Staff Gen. Charles Q. Brown Jr. “have done an excellent job of aligning the Air Force with the joint design that wins in the future,” Hinote said.

All of the new capabilities “play into a better … joint force [and a] better combined force with our allies.” The wargame showed “definite movement in the positive direction,” he added.

Hinote said he’s “excited” about that because recent such games “didn’t go so well. However now, “We are seeing … a positive trend, and the closer we get to the Future Force design, the more likely it is we can offer the President real options and real objectives that can be met.”

The “new platforms, new weapons … all of that is important,” Hinote said, but “none of them, in and of themselves, really change” the outcome of major theater wars.

The greatest return on investment in the exercise—“the most … I have ever seen”—stems from “going from a domain-centric joint force to what feels like ‘trans-domain’ or ‘all-domain,’ and being able to move across domains in very seamless ways,” Hinote explained.

With a well-integrated system, “if those things are working together … across domains, the return on … investment is really, really high. We see incredible results when we can get to that level of warfare.”

He called it “almost the ‘Holy Grail’ of warfare … Being able to operate it fluidly across the domains.”

Chris Dougherty of the Center for a New American Security, also in the Defense One dicsussion, said true all-domain command and control will be a step change in warfare, comparable to the coordination of infantry with cavalry, and the later addition of crossbows to create a rudimentary “combined arms” concept.

In World War II, he said, the U.S. military branches effectively fought “separate wars” in their domains, and even today, they are “more about deconflicting, and not truly integrating.”

The future of warfare, he said, will be achieved by “breaking these barriers down” between the services so true integration can happen.

The key development will be creating a network that can be resilient under attack “because we all know that it will,” Dougherty said. But “I do think we can build this force. I think it’s achievable.”

The U.S. military has undertaken many significant reforms in the past 40 years—sometimes without them being appreciated for their value—and shifting toward true integration is manageable, Dougherty said. But “cultural changes will have to happen” to enable it, he said. He said there were valuable connections created between the Air Force and Navy as a result of the “AirSea Battle” efforts of a dozen years ago, and those continue under different initiatives. Hinote said the Air Force and Army are building new connections under that service’s Project Convergence, which is taking shape through various other exercises this year to find weak points in the connectivity.

The “next iteration” of integration “has to include the training, the organizational structures … how do we exercise it,” Dougherty noted. Importantly, “as Gen. Hinote said, we brought in the allies. We don’t fight alone. We will almost always fight as an ally or a partner. And to the extent that we can bring them into our planning and integrate them into our force development process, the better off we’ll all be and the stronger the overall deterrent will be.”

Hinote said air operations centers are a great force multiplier for the Air Force, but that means they will certainly be attacked, and “we have to find ways to push them to the edges” of the battle so that connectivity and command and control remain uninterrupted. The AOCs are also being integrated “with the Army, Navy, Space Force, and Marines, as well.”

He said “we see a really interesting possibility where you might have a joint task force headquarters … and you might have a ‘shadow’ headquarters that mimics that … and that’s your ‘sandbox’ to do your experiments, your training, get your reps in, execute your plays, and you would transfer that to the real center when the time came.”

The idea of a “standing task force headquarters … with a shadow headquarters organization, where you’re constantly experimenting, you’re taking the latest data, you’re tracking the high-value targets, and you eventually transfer that to your main operating headquarters … We feel that has the potential to be something that can change the game for us. And it’s got to be all-domain. It’s got to be … domain agnostic. But if we can do that, that seems to be one of the stepping stones” that will get the force to where it needs to be.

Watch, Read: Keeping Humans in the Loop of JADC2 and ABMS