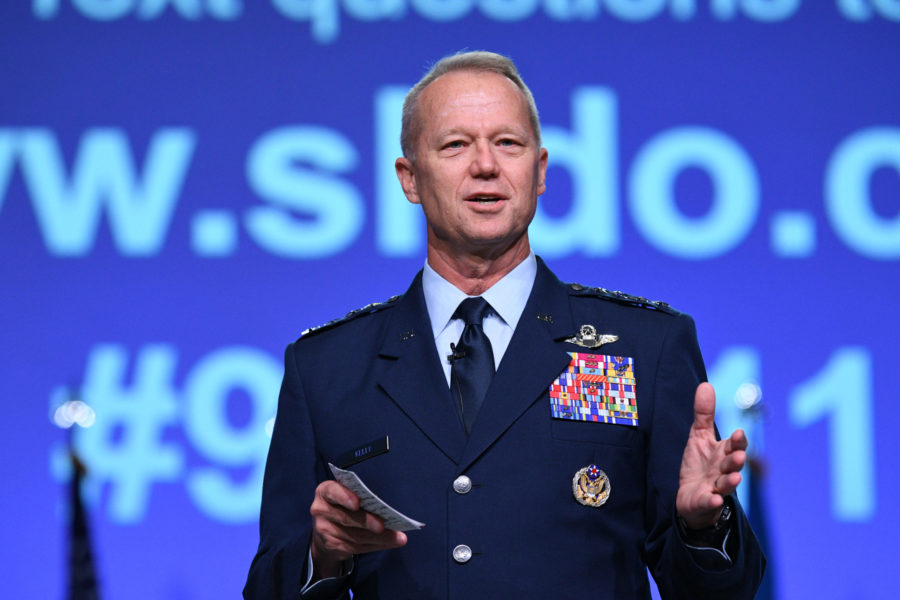 “We have to focus our fighter force to the basic realities of a new threat environment,” Kelly said in his ASC21 speech. “And that requires the fighter force to change to be successful.” Kelly said the joint force “requires air superiority” and doesn’t know how to fight or function without it—so this mission area should get priority for resources.

Kelly explained the the “four-plus-one” concept for the future fighter force—an improved F-22, making a “hot handover” to the Next Generation Air Dominance circa 2030; the F-35 as the “cornerstone” of the fleet; the F-15E and F-15EX as “big weapon” carriers; F-16s to provide capacity, especially in lower-end conflicts; and the A-10 as the “plus one,” with a fleet of 218 airplanes for close air support that sunsets in the early 2030s.

Incremental change will not keep the Air Force ahead of its Chinese counterparts, he said.

“You don’t just wake up one day and find yourself in the ‘lose’ column.” First, he said, the force finds itself increasingly in the “irrelevance” category, which is where USAF will be if it doesn’t retire legacy systems that no longer intimidate China. China is the “apex peer adversary” with vast capabilities in electromagnetic spectrum operations, Kelly said, and USAF could lose such a fight.

The “cold, hard realities” are that the Air Force was superbly prepared and trained to defeat a peer adversary—Russia—30 years ago, then achieved a highly lopsided victory in Iraq, Kelly said. But in the last 20 years, USAF was optimized for combat in a “permissive environment” that didn’t test the force. During that same time, China was focused completely on “the high-end fight, and fighting us.”

China’s force structure and systems are “designed to inflict more casualties in the first 30 hours of combat than we’ve endured over the last 30 years in the Middle East,” Kelly said.

As the Air Force inventory has aged and diminished, the balance with China has tilted more toward Beijing, he added. Kelly said Russia has been able to annex Crimea and China has claimed parts of the South China Sea “without firing a shot” because contesting those situations has become harder thanks to adversary air defenses.

To regain the advantage—“to be a resolute world power”—the U.S., through its Air Force, has to be able to penetrate “highly contested sovereign [airspace],” Kelly asserted. China’s mastery of the EMS must also be challenged, he said.

China is also “not debating the value of sixth-generation air superiority” within its senior leadership, he said, to the point where there is a “government ministry” dedicated to obtaining sixth-gen capabilities and wresting air dominance from the U.S.

If China gains sixth-gen capabilities before the U.S. Air Force, “it will not end well,” he asserted, adding, “Air superiority is a terrible place to receive a silver medal.” The U.S. should consider regaining air superiority “with margin” as its top military priority, deserving of a “kind of Manhattan Project” focus, funding, and emphasis.

The NGAD tops Kelly’s list of critical ACC fighter requirements, followed by the F-35, which “must have” the Tech Refresh 3 upgrade and Block 4 Suite of improvements, he said. The F-15E and F-15EX provide near-term capacity but have to have significant electronic warfare upgrades, Kelly said. The F-16 also “addresses risk” by providing capacity, and it, too, must have electronic warfare improvements.

Retaining more A-10s than needed, however, “takes us off the road” to a modernized Air Force and displaces capabilities the service needs to win, Kelly insisted.