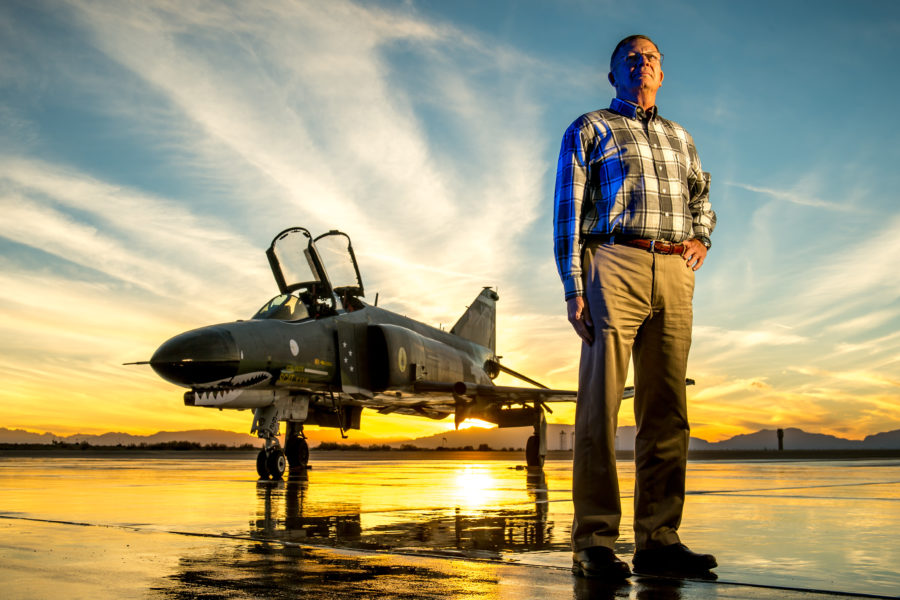 Air combat is “a real team sport” requiring agile thinking, persistence, and a willingness to sometimes disregard the rules, retired Col. Charles B. DeBellevue, the highest-scoring Air Force Vietnam ace, said at a seminar held to commemorate the 50th anniversary of his last air-to-air kills.

Speaking at a Sept. 8 event in Oklahoma organized by the Air & Space Forces Association Gerrity Chapter, the Oklahoma Aeronautics Commission, and the Oklahoma Defense Industrial Association, DeBellevue, the last ace on Active duty, a weapons systems officer, credited the “real-time support of a lot of people” from crew chiefs and maintainers to cooks and “supply guys” for making the F-4 Phantom effective in battle.

“It takes a lot of people to make it work,” he said. The F-4, in which DeBellevue scored all his kills, “breaks all the time. In fact, you could put an F-4 on the ramp, let it sit there, and not do anything to it—it’ll break.”

He walked the audience through his six kills, earned in 96 missions over North Vietnam out of 220 combat sorties and 550 combat hours during the war, resulting in decorations that included three Silver Stars and six awards of the Distinguished Flying Cross. All of DeBellevue’s combat victories were scored from May to September 1972, shortly after Operation Linebacker began.

DeBellevue revealed that F-4 pilots in that period were discouraged from dogfighting because “the powers that be said, if you get into a dogfight” while flying the F-4 against lighter, more nimble enemy fighters, “you’re probably going to lose the airplane. So we weren’t allowed to do that. We weren’t trained” in close-in, air-to-air maneuvering, he said.

“The first time I saw a dissimilar aircraft” in a dogfight, it was “a Mig-21, behind me,” he said.

The F-4 crews were directed instead toward shooting enemy aircraft with missiles at longer range, but that rarely worked against small, hard-to-see enemy fighters launched from airfields close to the action. Most of the kills scored by DeBellevue and the various pilots he flew with were at close range. In the two-seat F-4, back-seaters received equal credit with pilots for air-to-air victories.

He described the frustration of launching multiple missiles that didn’t connect with their targets, until finding greater success with the AIM-9J Sidewinder, which was rushed to operational units even before it went through operational testing.

After one encounter with two MiG-21s, after he and his pilot had already accumulated several kills, DeBellevue said intelligence later revealed that the enemy pilots “knew who we were” and had been sent specifically to kill USAF’s leading aviators.

“They practiced every day for us,” he said. “They knew who they were fighting.” Intelligence also had color-coded enemy pilots as inexperienced or skilled, and those sent after DeBellevue were coded green, meaning “aces,” he said.

Program host retired Lt. Gen. David A. Deptula, head of AFA’s Mitchell Institute for Aerospace Studies, noted that shortly after this period the Air Force instituted the “Red Baron” studies showing that pilot survivability in combat rose significantly after they had accumulated 10 real-world missions. The later “Red Flag” exercises were designed to realistically give pilots those first 10 missions, so that the first time they experienced air combat, they would already be comfortable with the sounds and sensations of a real battle. The success of Red Flag was borne out in Operation Desert Storm in 1991, when Air Force pilots thoroughly dominated the skies.

DeBellevue said “we had to learn the book” way of doing things; then the way their senior officers wanted things done; and then he figured out “my idea of how things should be.”

In the Vietnam battles, DeBellevue said he believed his task was to watch aircraft systems, look for enemies, operate weapons, and keep up a running commentary for the pilot. In one engagement in which he was flying with fellow ace Steve Ritchie, DeBellevue said this approach worked well—so that Ritchie could always “keep his eyes outside” rather than having to look inside the cockpit at displays and status. In such engagements, which could last just a couple of minutes, a pilot taking his eyes off the target meant he could lose sight of “that little speck against a cloud” at the very edge of visible range, which was a potentially fatal situation, despite the F-4’s sensors.

DeBellevue said he was a desirable weapon systems officer because he could also perform some pilot tasks, having gone through some pilot training. He said he could fly the aircraft during an aerial refueling and could “get it on the ground” safely if necessary. In the early days of the F-4 in Vietnam, crews were two pilots, which meant that the back seat had throttle and stick controls like the forward cockpit, he noted.

Danger was ever-present, DeBellevue said, noting that on the mission where he and Ritchie scored their first kill, another F-4 in the fight was shot down. Maj. Robert Lodge was killed, and Capt. Roger Locher, the WSO, survived the crash but made a harrowing three-week march without food or supplies to a rescue site. A tremendous effort was expended to find, cover and recover Locher, DeBellevue said, and his commander was criticized for using so much equipment and risking so many lives in the effort.

But in war, “you fight for your buddy,” he said.

“I was willing to die for my country,” DeBellevue said, but spending time in a prisoner of war camp “was not on my bucket list.” Consequently, he said, he made sure “I was very good at what I did.” He joked darkly that the “Hanoi Hilton” POW camp “didn’t give points” for long stays.

DeBellevue said Ritchie was the “most experienced guy” in the 555th squadron, and on the ground, DeBellevue was his assistant.

“We worked well together,” he said. Ritchie was the pilot in four of DeBellevue’s six kills. In most of those encounters, he said they were heavily assisted by EC-121 “Disco” AWACS-type aircraft.

In the first kill they achieved together, on May 10, 1972, part of the MiG-21 they destroyed with a pair of AIM-7 Sparrow missiles lodged in their aircraft as they flew through the fireball. “The crew chief found it,” he said. The F-4 “didn’t care” that it was carrying a chunk of scrap metal, he said. On that first day he got a kill, USAF and Navy pilots together scored 11 kills, he noted.

In several engagements, DeBellevue said they exceeded the aircraft’s hard limit of 700 knots at low altitude by 100 knots, because it was the right thing to do in the situation, he said, but there was concern that the canopy, which was an issue on the F-4, would tear off.

Time was so much of the essence—and enemy radio technicians were listening—that there would be no announcement if a fighter had spotted and was pursuing an enemy fighter. The lead fighter would drop its fuel tanks, light its afterburner and others in the flight had to spot this behavior and “play catch me if you can,” DeBellevue related.

The E-model of the F-4 had a gun for close encounters, with 550 rounds. In one engagement, Ritchie fired a solid 3-second uninterrupted burst which exhausted the magazine; the maintenance technicians had to replace the overcooked gun barrels later, DeBellevue related.

On his last combat mission, DeBellevue said his flight was low on fuel, and, fearing they would not make a rendezvous with a tanker, opted to head directly for home base. They climbed to 47,000 feet, to obtain the best possible cruise with the F-4, which burned a minimum of 100 pounds of fuel per minute.

“We thought we could just barely make it…80 miles.” The F-4’s glide ratio is two miles for every 1,000 feet of altitude lost, he noted.

“We were not supposed to fly over Laos,” which was in the direct path, he said, adding, “I’m sorry.” The group kept gear up until the last possible minute, then dropped the gear and landed almost at flameout.

“That was my last combat mission,” DeBellevue said, adding that he would like to have made it an even 100 missions over the North—he had 96—but “the (pilots) that were supporting us had a chance to move up,” and so it was not to be, but “I would have enjoyed four more.”