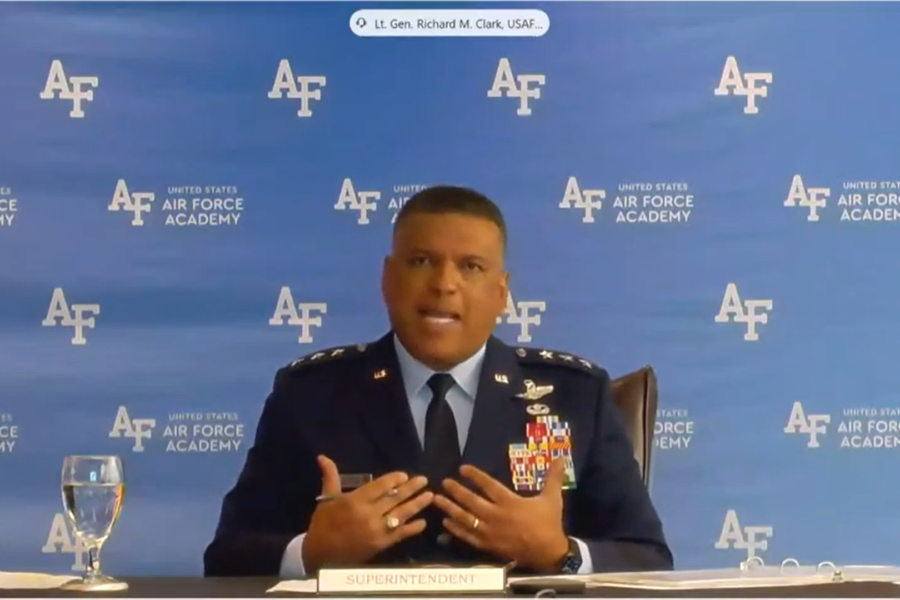 The head of the U.S. Air Force Academy on March 2 defended the school’s disciplinary program for students who violate the honor code, as House lawmakers questioned service academy superintendents on a recent spate of cheating scandals.

“We have a very robust honor education system that starts from the day that they walk into the academy,” USAFA Superintendent Lt. Gen. Richard M. Clark told the House Appropriations defense subcommittee.

The school tries to impart those lessons through instruction and mentorship over the course of a student’s tenure at USAFA. If a cadet does slip up, they are sentenced to a probationary period that encourages them to “live honorably and abide by our code,” Clark said.

The probationary approach is particularly helpful in a cadet’s early years at the academy.

“We’ve had a 95 percent success rate, meaning cadets who get into that probationary status, they never have another incident or issue with the honor code,” Clark said. “We’re very proud of it. … We want our cadets to respect, not fear the honor code.”

The program isn’t without flaws, however. USAFA is reviewing changes to its honor and disciplinary system after nearly 250 cadets were suspected of using online learning to cheat on tests and plagiarize assignments in spring 2020.

One student was expelled and one resigned from the academy because of their misconduct, Air Force Magazine reported when the issue came to light in January. Nearly all others were placed on probation or remediation lasting up to six months. That entails mentorship and journaling to reflect on what happened, while facing penalties like extracurricular limitations.

“The purpose of the review is to provide findings and recommendations for improvement to the Honor Program, ensuring the Cadet Honor Code and Honor Program relevantly and effectively achieve cadet character development,” the school said.

It’s the first time in several years that USAFA will refresh those policies, though the school has dealt with at least six cheating probes over the past two decades. There is no timeline for finishing the review or implementing its findings.

USAFA noted that the student-led process of disciplining the cadets suspected of cheating was taking longer than usual because of pandemic-era constraints.

“Peer-to-peer education is critical, but the virtual world allows us to reach people in different ways,” Clark said. “We’re able to continue our program and still focus on our leader of character framework.”

Though personal connection tends to come more easily when conversations happen in person, it’s hard to quantify whether online discussions are as effective at leadership-building. Still, USAFA is making do with the situation at hand.

“We don’t have time to rest just because COVID is here,” he said. “We still have to develop these leaders, because we still have to graduate these cadets when their time comes so that they can go out and serve.”